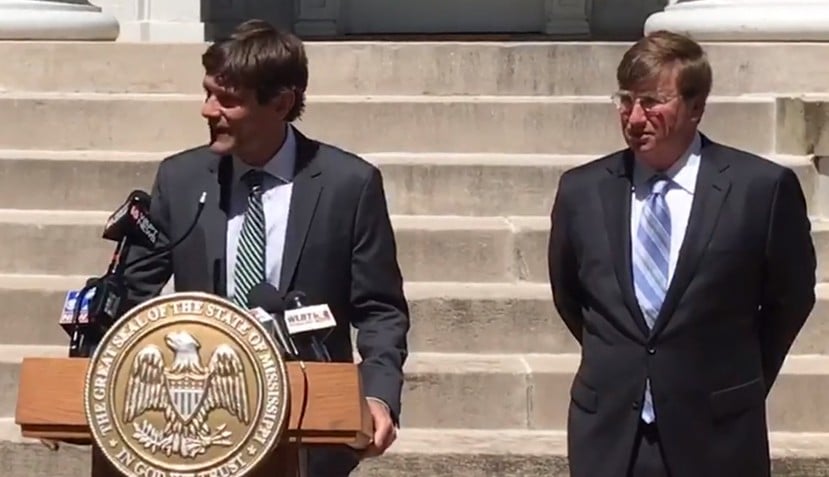 Hours before the news broke that the U.S. now has the most reported cases of COVID-19 cases in the world, surpassing China, Mississippi Gov. Tate Reeves held a press conference on the steps of the Governor’s Mansion in Jackson with State Health Officer Dr. Thomas Dobbs on Thursday.

One of the topics Reeves addressed is the rising numbers of unemployed people in the state. “The total number of unemployment claims this week when compared to a week ago was up 1,200 percent,” he said, noting that other states are facing even larger unemployment figures.

Mississippi already had one of the highest unemployment rates in the country at 5.4% before the crises, and according to the U.S. Department of Labor, Mississippi’s unemployment claims are nearly six times higher than they were earlier this month

As he has done before, the governor vowed to take aggressive action to slow the spread of COVID-19, but he stopped short of issuing a state-wide shelter-in-place order. Reeves said he supported the stay-at-home order that Louisiana Gov. John Bel Edwards recently issued. Louisiana has more than 2,300 reported cases and 83 deaths.

Earlier this week, Reeves signed an executive order meant to mandate certain social distancing practices, including limiting gatherings of any kind for more than 10 people. That order has caused consternation among some Mississippi cities that already had tougher mandates in place. Some mayors questioned whether the governor’s executive order nullified their emergency actions.

In response, Reeves said that he will sign another executive order to clarify the previous order.

“It sets a state-wide requirement for social gatherings and social distancing,” Reeves said of the order. “It also ensures that essential business operations are maintained.”

The governor said his order set the floor, statewide. Cities and counties can issue orders to go beyond the state’s recommendations, but they can’t do less than the state mandates, and they can’t interfere with his order.

As an example, Reeves said that cities are free to implement curfews, but they can’t implement a curfew that impedes workers from going to work at essential businesses and services.

“No order can keep those essential services from going on,” he said.

Reeves defended the huge number of businesses and services that were identified in the order as essential, covering business categories from grocery stores to Uber drivers and oil-rig workers.

Mississippi Health Officer Dr. Thomas Dobbs said that he has been looking at best practices in other countries that seem to be slowing the rate of new infections, known as “flattening the curve.” He mentioned both Singapore and South Korea on Thursday.

“They learned a lot from SARS,” he said, before outlining the “collaborative, all-government response” strategy he hopes to implement in Mississippi once financial resources are available.

The first prong of the strategy involves basic case-finding, isolation and quarantining.

“We really have to ramp up testing,” he said, then isolate or quarantine those that test positive.

Dobbs said the state lab has done about 4,000 tests by now and that private labs have done about the same number, bringing the total number of tests completed in Mississippi to about 8,000.

As of March 25, the MSDH Public Health Laboratory reported it has completed 2,776 tests.

“It’s quite a lot,” Dobbs said. He expects cases to rise considerably in the state as testing continues to ramp up. At this time, 485 cases have been identified in the state and six people have died.

Dobbs continued to advocate only testing those with symptoms of the virus, even though people can be contagious even when they are not symptomatic. With additional resources, the tests may be extended to patients with milder symptoms but will not be performed on the “worried well,” he said.

The second part of the strategy includes more aggressive outbreak investigations to quickly identify all cases and all contacts.

“It’s a hugely labor-intensive effort to make sure you find every case and that you have eyes on them to make sure they’re properly isolated,” Dobbs said, “but from there, we want to do an intensive contact investigation to identify that second tier of individuals who are likely to be the next generation of infection and make sure they understand their quarantine obligation to make sure it doesn’t spread beyond that level.”

The third part of the strategy focuses on community outbreak response, where the state’s resources would be focused on the communities where the highest cases of the virus are found.

Dobbs and Reeves agree that the outbreak is in its early stages.

“We expect to see more and more cases,” Dobbs said. “We will see more deaths.”

The governor said he would issue stronger guidelines if necessary.

“Should the public health experts make a determination that there is a region or a county or a city that needs a shelter in place order, I am prepared to enter it,” Reeves said. “When it is in the best interests of the citizens of Mississippi, I will be willing and able to implement it.”

Mask making in full swing in Vicksburg and Warren County