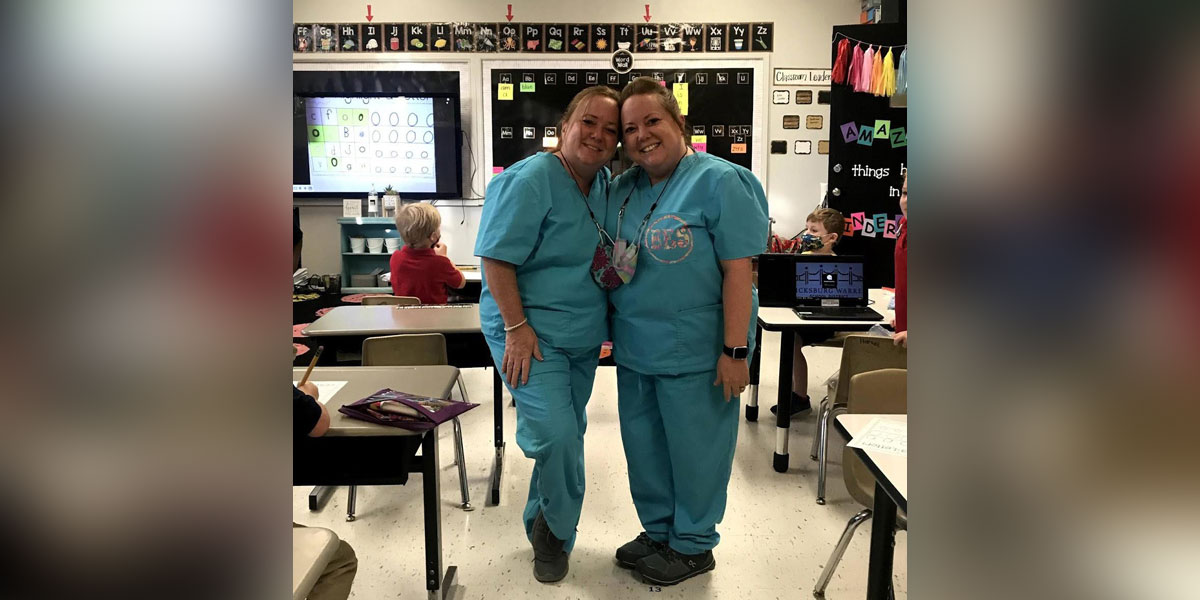 It’s long been said that good things come in small packages, and at Bovina Elementary School this phrase is proven true.

Amanda Gordon and Alisa Harvey are identical twins who both teach at Bovina. Amanda is a first grade teacher and her sister Alisa teaches kindergarten. They both stand a diminutive 4 feet, 7 inches tall.

“Teaching lower elementary was perfect for us considering we aren’t much taller than the average 6-year-old,” Gordon said with a laugh.

“Our mother was an assistant teacher and my mother-in-law, Candis Harvey, was a life-long educator,” Harvey added. “The importance of education and good educators has always been ingrained in us.”

As for the sisters teaching at the same school, it was somewhat intentional.

“Alisa started at Bovina when it first opened back up. That year, my daughter was the first student enrolled. Her lunch number was one,” Gordon said. “I wasn’t working that year, but when I saw how great Bovina was destined to be, I really wanted to go back to teaching and be a part of it.”

“When a kindergarten position opened up, I told Amanda, and she interviewed for the position and got it!” Harvey said. “Being together wasn’t so much intentional as it was a blessing. We never fight, and it’s great knowing that she’s close if we need each other.”

As for being confused for each other, “The kids find it very easy to tell us apart. It’s the adults that have the most trouble,” Gordon said. “For example, we have had parents of a child that is in Alisa’s room come to my room and ask where their child is, and I’ll tell them that I don’t have a child by that name in my class. This parent got very concerned until we figured out they were in Alisa’s room.”

Harvey added, “Out in public, we are getting hugs from parents [and] we have no clue who they are. We know that they have confused us with each other. Often we just hug and smile, so things won’t be awkward.”

Asked if they ever played tricks on people, “One time we went into each other’s classroom and pretended to be the other one,” Harvey said, .”The students were a little confused but figured it out pretty quickly.”

Gordon said working with her twin has many advantages.

“It’s kind of strange. I wouldn’t say that we can feel something the other person is feeling but if one of us is sad, upset or angry, we always know how to help the other out,” she said. “For example, we unintentionally got pregnant four weeks apart. We helped each other a lot during the pregnancies and after. It was such a blessing.”

“When in college, we got accused of cheating, and we still would have the same answers. The teacher apologized later.”

Gordon agrees that being a twin is blessing.

“It means a lot that we can work, play, and go to church together and still never argue,” she said. “We love being able to walk across the hall just when we need advice or help without judgement. It is also nice to have someone to be able to just go to and hardly say anything, but they always seem to understand.”

The sisters are proof that the old saying should be changed to “Good things come in small, identical packages.”