By Melissa Isaacson ESPNChicago.com Archive
Mike Singletary grappled to make sense of it, but it was a losing proposition.
[+] Enlarge 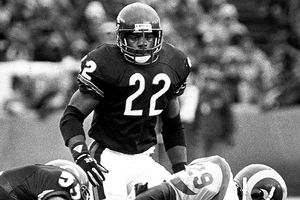 Jonathan Daniel/Getty ImagesDave Duerson was known as a tough and versatile safety who could do it all on the football field.
“This really throws me; I just don’t get it,” he said. “I’m just really thrown off by this whole thing.” Singletary did not yet know the cause of death of his friend and former teammate Dave Duerson, who was found Thursday night in his Miami home. The Miami-Dade medical examiner’s office was not saying Friday, nor were the police until their investigation was completed. Until then, Singletary and the rest were left with only the sad conclusion that, at age 50, Duerson was gone too soon. “Absolutely everything I heard about Dave — and when I talked to him — was that he was in good spirits and doing fine, he was engaged, and really just living life at his best,” Singletary said. Some had heard vaguely of financial difficulties after Duerson had made an initial success of a multimillion-dollar sausage company in the early 1990s. A misdemeanor domestic battery charge led to his abrupt resignation from Notre Dame’s board of trustees in 2005. But in recent years, and to those who spoke with him this past fall during activities celebrating the 25th anniversary of the Bears’ Super Bowl win, Duerson appeared happy and healthy. “I knew he had gone through some hard times with business and through his divorce, but he seemed fine,” said former Bears coach and current ESPN analyst Mike Ditka. “We talked at the reunion, and I asked how everything was going and he said fine. There was no animosity at that point.” Any potential conflict with Ditka stemmed from comments the coach had made years before insinuating that the NFL Players Association, for which Duerson had served as a player rep and later as a member of its executive board and a trustee for its pension plan, was insensitive to former players’ needs. Duerson, former Bears player rep Trace Armstrong said, was passionate about taking care of players from all eras, testifying before Congress in ’07 on the NFL player retirement plan.
[+] Enlarge 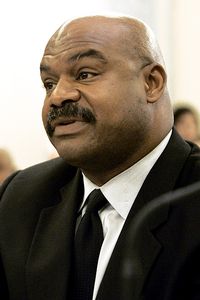 AP Photo/Susan WalshDave Duerson testified before Congress in 2007 on the NFL player retirement plan.
“Dave cared about the game, and he cared about players,” said Armstrong, who served with Duerson on the union’s executive board. “More than anything, he was interested in fairness. That’s one of the things I will remember about him, being a great advocate for players and what was fair.” Singletary said Duerson always took time, when he played for the Bears, to advise teammates on life outside football. “He just did things the right way,” Singletary said. “He was a bright guy and he helped a lot of our guys with investments, making decisions, encouraged them to go back to school, all those things. That was what Dave was about.” When Bears cornerback Mike Richardson was looking at a maximum 13-year prison sentence for drug possession in 2006, among those who spoke on his behalf to Judge Marc Kelly, a Notre Dame grad, was Duerson, Richardson’s former roommate. “It might have made the difference between me being free today,” Richardson said. Richardson said he spoke to Duerson a few weeks ago in Chicago after Duerson asked him to be a guest on a radio show he was hosting. “I wasn’t available but we did get a chance to talk, and he sounded like Dave, upbeat,” Richardson said. “I felt if anybody was going through anything and needed to speak to someone, I’d be the perfect person. But he didn’t give me any indication he was going through any pain.” That was not unusual. “For several years, Dave and I were roommates for all the road games, and he never indicated anything was bothering him, even when Buddy [Ryan] was saying he wasn’t as good as Todd Bell or that he was a small part of the defense or whatever he was saying,” Richardson recalled. “He always had a smile to hide everything else he was going through.” The starting strong safety on the ’85 Super Bowl champion squad, Duerson’s distinction was, well, distinctive. A third-round draft pick out of Notre Dame two years earlier, Duerson had the unenviable task of replacing Bell, a Pro Bowl safety, a contract holdout and one of the hard-nosed defensive coordinator’s all-time favorites. (Bell died of a heart attack in 2005 at age 46.) Duerson won the starting job, became one of the top playmakers on the team — Singletary even going so far as to call him the MVP of a defense with three future Hall of Famers — and, beginning in ’86, was named to the next four Pro Bowls. “He was a great player,” said a stunned Ryan, just receiving the news. “He did everything. He was a linebacker, a safety, sometimes even a corner. We asked so much of him coverage-wise. But we didn’t have time to wait. We loaded him up with a lot of stuff mentally and physically.” The physical stuff Duerson could handle. The mental part was a different story, and Duerson admitted this past fall in an interview for ESPNChicago.com’s series on the ’85 Bears that he did resent Ryan’s treatment, which was standard for the coach in handling rookies. “The plan for me out of Notre Dame was to go to Harvard Law School, but I hadn’t done it yet and the day I got to the Bears, Buddy said, ‘Well, you won’t be here too long,'” Duerson said. Duerson said he called his father, who was awarded five Bronze Stars in World War II and fought in Normandy, for a little advice. “That was my hero, and he was an awesome man,” Duerson said. “I told him, ‘I didn’t go through college to go through this.’ My dad thought every male child should serve two years in the military, and he said, ‘It sounds to me like you’re in the Army.’ “What I learned from him was perseverance. I never flinched; I never reacted no matter what [Ryan] said or did. I was going to be the bigger man.” Singletary, one of Duerson’s closest friends on the team, said each player had to survive Ryan’s trials on his own. “We all had to handle it in our own way. Buddy didn’t like any rookies that came in, but Dave had to lick his wounds,” Singletary said. “He took it a little more personal than most of us, but I really think Buddy was just trying to help Dave be the best he could be and there was nothing personal by it.” Both Duerson and Ryan said that when they saw each other in recent years, there was always a handshake and often a hug. “Most rookies thought I didn’t like them because I was on them all time to hurry their progress,” Ryan said. “But we got along. He was a normal rookie that way. And I was proud he made the Pro Bowl. That was great.” On Friday, it was with a mixture of shock and sadness that these men absorbed the bad news. “Dave made plays everywhere, every week,” Singletary said, “but what I remember is his smile and his tremendous attitude about life. Every time Dave and I talked, everything was great, and I’d say, ‘Wait a minute, things can’t always be great.’ “That was something that was just really special about him.” Melissa Isaacson is a columnist for ESPNChicago.com.]]]]> ]]>
Related Topics:
Up Next