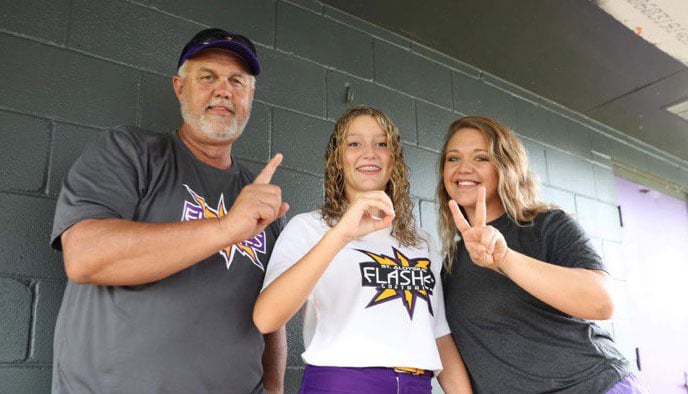 St. Aloysius High School softball pitcher Kyleigh Cooper has become a “strikeout queen“ as she has now achieved a huge accomplishment of surpassing 100 strikeouts midway through her freshman season.

Cooper never kept up with her strikeout stats and was thrilled to learn that she now has an overall total of 102.

“It’s really exciting to see all the hours, days, and years of practice, lessons, and games pay off,” Cooper said. “I’ve pitched many games that I couldn’t even throw a strike and I’ve had my share of “walk fests” too. I just love this game, highs and lows. “

Since joining the Lady Flashes earlier this summer, Cooper has led the team to great things such as their best season in three years and has quickly become the go-to player on the field that everyone depends on to get the young team the win.

“She is a coaches dream,” Buck said. “Strong leader to the girls and is always uplifting and encouraging. She’s extremely coachable and easy going, she does everything with a smile. She transferred over to us this season and since then we have formed a great relationship out on the field and has worked so hard! Her composure and control on the mound is well beyond her years and the confidence she carries shines throughout the whole team and we are so proud to have her.”

Cooper is currently averaging over eight strikeouts per game along walking one batter per match. She is coming off one of her best performances which was on Tuesday when she struck out 13 batters against Adams County Christian School.

Earlier in August is when Cooper’s outstanding performances began in the Tri-County Tournament where she threw a total of 22 strikeouts and helped the Flashes to a victory over Clinton Christian Academy.

Cooper last played on Thursday, racking up eight strikeouts to aid in a 6-2 victory for the Lady Flashes over Jackson Academy.

Cooper’s athletic ability didn’t happen overnight. She put in countless hours of practice to develop herself into a stellar athlete. She says her relationship with Coach Buck has motivated and uplifted her and she’s found a happy place with the Flashes.

“I love playing for Coach Buck. She is so understanding and has helped me progress as a pitcher, player and even a person,” Cooper said. “She teaches us how to respect our team, teammates, and parents in the stands and so much more. She pushes me, not in a intimidating way but an encouraging way. She’s my role model and I hope I can be as good as her someday.”

Although Cooper has worked extremely hard to get this far, she couldn’t forget those who paved the way and helped her to this point.

“Number one would be my Paw Paw (Gary Jones) he is and has always been my #1 fan and supporter. He has caught millions of my pitches, he’s toted many of bruises from catching for me. My Paw Paw is my best friend! I also would have to thank my mom, dad, Nanna, and my pitching coach Bobby Waterbury. Thank you all for helping me get where I am today.”

With Cooper’s phenomenal start to her freshman season, she could possibly be headed down the route of becoming one of the best pitchers to come through Warren County by her senior season.

“Not only is her pitching usually on point her defensive skills are great as well.  She has extremely good reactions and has made some really great plays for us as well,” Assistant Coach Jeff Buck said. “I’m super proud of her for reaching this 102 strikeout milestone so early in the season and I know she’s gonna get many many more because we still have a lot of games to play.   She seems to be getting stronger and stronger as we go and I’m anxious for us to get back out there and see what we can do the rest of the season.”

If weather permits, Cooper will be back in action this week with the Lady Flashes where she will be on the rubber and continuing to strikeout batters as they dare step up to the plate.

“My goal this season is just to continue to grow as a team, and to learn something from every game I pitch. It would be cool if I could strikeout 200 more, we’ll see. Ya never know with softball.”