Former Vicksburg sportsmen playing each other in the Armed Forces Bowl

Two former St. Aloysius football players and one former Vicksburg High standout will lead the way for the University of Southern Mississippi and Tulane University as they face each other in the Armed Forces Bowl.

The game will be held on Jan. 4, 2020, in Fort Worth, Texas. The Golden Eagles (7-5) and the Green Wave have not played each other since 2010, and both teams have suffered some unexpected losses this year.

Former St. Aloysius Flashes football player Drake Dorbeck will start at offensive tackle for the Golden Eagles in his last college football game. Dorbeck has become an aggressive line for USM over the past few years and is all set to make an impact on this game. He also helped the Flashes to a championship game in high school during his senior year.

DeMichael Harris is another former Flashes football player who will play running back and wide receiver for USM. Harris has impressed his coaches with his speed and athleticism over the past two years helping the Golden Eagles to a bowl game. Harris rushed for 3,649 yards and 47 touchdowns while at St. Aloysius. 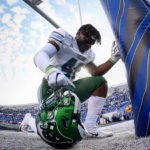 Tulane linebacker and former Vicksburg High standout Nick Anderson will help his team’s defense to try and shut down the Golden Eagles. This is Anderson’s first year at Tulane after transferring from Jones Community College. Anderson was a two-time defensive player of the year in Vicksburg where he was known for his great ability to hit any player who came his way.

The game will be exciting to see knowing that a few hometown sports heroes will be out there playing hard to win.