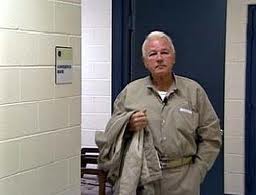 Edwin Edwards’ stay at a Baton Rouge halfway house may be short-lived; the former Louisiana governor is set to go on home confinement in the very near future.Edwards was released from federal prison Thursday after serving an eight-year sentence on bribery and corruption charges. When Edwards arrived at the Ecumenical House on Thursday morning, he met with director Darla O’Connor. O’Connor  has already filed the paperwork to move Edwards out of the halfway house and into home confinement to live with relatives.He  will go in the next two weeks. Edwards could be sent home as soon as the next 48 hours. One longtime political ally of Edwards said the former governor will not hide, and that he will probably write a book and even go on a speaking tour. “He is certanily a fascinating character,” said former Insurance Commissioner Jim Brown. “Whether you love him or hate him, everyone wants to know about him, and he is the most charismatic character in the history of Louisiana, even surpassing Huey Long.”Brown served a six-month prison sentence for his involvement in the Edwards case. He has worked for years to get his conviction overturned. Edwards left the Ecumenical House around lunchtime Thursday. He is allowed to come and go as he pleases during his stay at the halfway house.