First COVID-19 vaccine is on its way to the states

Friday, the federal Food and Drug Administration gave its final emergency approval to begin using the Pfizer COVID-19 vaccine. The approval triggered an immediate effort to distribute 2.9 million doses of the vaccine across the nation. Pfizer has contracted with the U.S. to supply 100 million doses by March 2021, and the shots will be free to public.

In addition, McKesson Corporation is distributing kits of syringes, alcohol pads, face shields and other supplies to distribution sites identified by all U.S. states and territories.

The approval makes the U.S. the sixth country to approve Pfizer’s vaccine. The first five were Britain, Bahrain, Canada, Saudi Arabia and Mexico. Numerous other countries and the European Union are expected to authorize distribution within the next week or so.

Mississippi is slated to receive enough doses for 25,000 people by next week. The first round of vaccines will go to health care workers on the front line of treating COVID-19 patients. Top state health officials Dr. Thomas Dobbs and Dr. Paul Byers will be the first to receive the shots in a public demonstration that the vaccine can be trusted.

Nationally, the cumulative cases in the U.S. have soared to about 16 million, and the rates of infection, hospitalization and deaths continue to rise.

At least 2,951 people died of the virus Friday in the U.S. and 280,514 new cases were reported. As expected, the rate of deaths is increasing steeply after a surge in new cases. Deaths have increased 60% in the past two weeks, while cases have gone up about 25%. The number of people hospitalized across the nation now exceeds 108,100.

In Warren County, MSDH reported 38 new COVID-19 cases Saturday and no new deaths. The cumulative number of cases in Warren County to date is 2,108, and the county’s death toll is 64. The seven-day average of new cases in the county has risen to 25.4 per day, five times higher than in early November when the average was about five cases per day.

Statewide, MSDH reported 2,665 new COVID-19 cases Saturday, bringing the total cumulative confirmed cases in Mississippi to 177,947. The seven-day average of new cases is 2,070 per day, more than double the seven-day average a month ago, when the state’s numbers were already on the rise. The current averages far outstrip the numbers seen at the height of the last surge in July.

Of the 56 deaths MSDH reported Saturday, 32 occurred between Nov. 20 and Dec. 11 in the following counties:

Another 24 COVID-19-related deaths occurred between Nov. 5 and Dec. 6 and were identified from death certificate reports.

New cases and deaths were reported to MSDH as of 6 p.m. Friday, Dec. 11. MSDH usually reports statistics on the COVID-19 coronavirus each day based on the previous day’s testing and death reports.

The number of Mississippians hospitalized for the virus as of 6 p.m. Thursday, Dec. 10, was 1,267. The number includes 1,156 with confirmed cases of COVID-19 and 111 people with suspected but unconfirmed cases. Of those with confirmed infections, 295 were critically ill and in intensive care units and 177 were on ventilators. 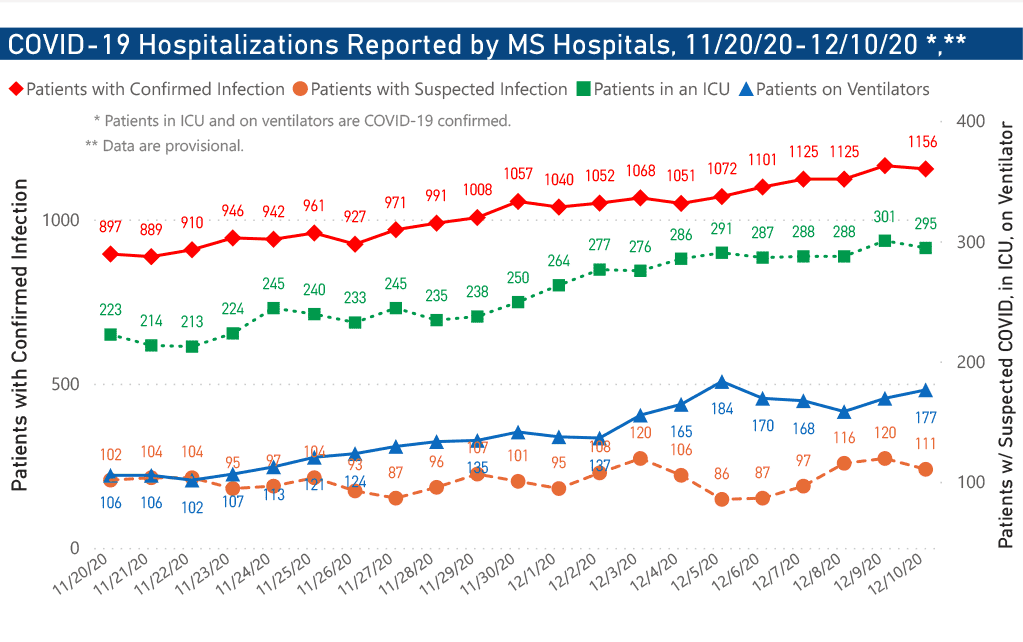 MSDH has estimated the number of people who can be presumed recovered from COVID-19 in Mississippi. That number is 136,627 through Sunday, Dec. 6. It represents about 76.8% of the cumulative 177,947 cases reported as of Saturday, Dec. 12.

The number of cases in Warren County three weeks ago, Saturday, Nov. 21, was 1,707, therefore the estimated number of people presumed recovered in the county is 1,643, or about 77.9% of the 2,108 cumulative cases reported as of Saturday, Dec. 12. The county has an estimated 401 active cases.

The total number of Mississippians tested for COVID-19 (PCR and antigen tests identifying current infections) as of Saturday, Dec. 5, is 1,436,626 or about 48.3% of the state’s 2.976 million residents. MSDH reports statewide test results once a week. Without daily updated numbers of tests, it is impossible to accurately calculate Mississippi’s positivity rate (positive results to tests, seven-day average); however, the estimated rate was 23.9% Friday, according to Johns Hopkins University. The national rate is 11%, and 5% or lower indicates adequate testing.

A total of 30 deaths in Warren County were residents of LTC facilities.