Vicksburg Steel Strong is an organization made up of Pittsburg Steelers fans who came together to enjoy football and to make a difference in the community.

The organization has been in existence since Nov. 4, 2018, and Antonio Felix is its president. Felix has always had love for the Steelers.

“We voted Tony as President because he is a strong and very dependable man,” said member Pat Terrell.

Felix, born in Los Angeles, moved to Vicksburg at a young age with his mother, and he graduated from Vicksburg High School in 1992.

A short time after graduation, Felix went to prison for four years on a aggravated assault charge. While incarcerated, he made the most of his time. He learned carpentry and earned a barber’s license in 1995.

After his release, Felix never looked back. Today, he lives in Vicksburg with his wife of 24 years, Marcie, and their three kids: Marcus, Antonio Jr., and Dejah. He’s also been a barber for 24 years and works at Fred’s Barbershop.

Vicksburg Steel Strong does community service work by hosting clothing drives, feeding the homeless, mentoring youth at the Warren County Detention Center and sponsoring a debutante ball, among many other things. The group also participates in every parade that Vicksburg hosts and supports Toys For Tots.

“I see this organization continuing to grow, and we have our minds right so I know we can do it,” said Adrienne Casselle. 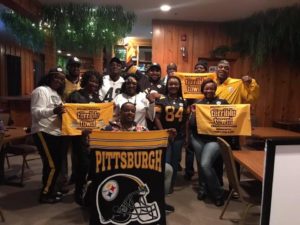 In the past year, Vicksburg Steel Strong has made a huge impact on the community, and they have no plans to stop.

“We are firm believers in Philippians 4:13 that says, ‘I can do all things through Christ who strengthens me,'” said Terrell.

The group is about 30 members strong, and each member has a big love for their community.

“We are small in numbers, but we are full of love,” Felix said.

The members all have different stories on why they joined the organization, but they are all glad that they did.

“I am a true fan to the Steelers—inherited by my parents which is why I joined,” said club secretary Kevia Hall.

As the group’s leader, Felix is an example that people can change if given a second chance and he is paving the way for young kids to follow the right path through his mentoring. The organization brought people together from all over the community with the love of a football team, but their love reaches out to others who are having a tough time. The group is not in any competition with anyone, they just want to be better than they were the year before.

Graves of the CSS Arkansas dead will soon be marked 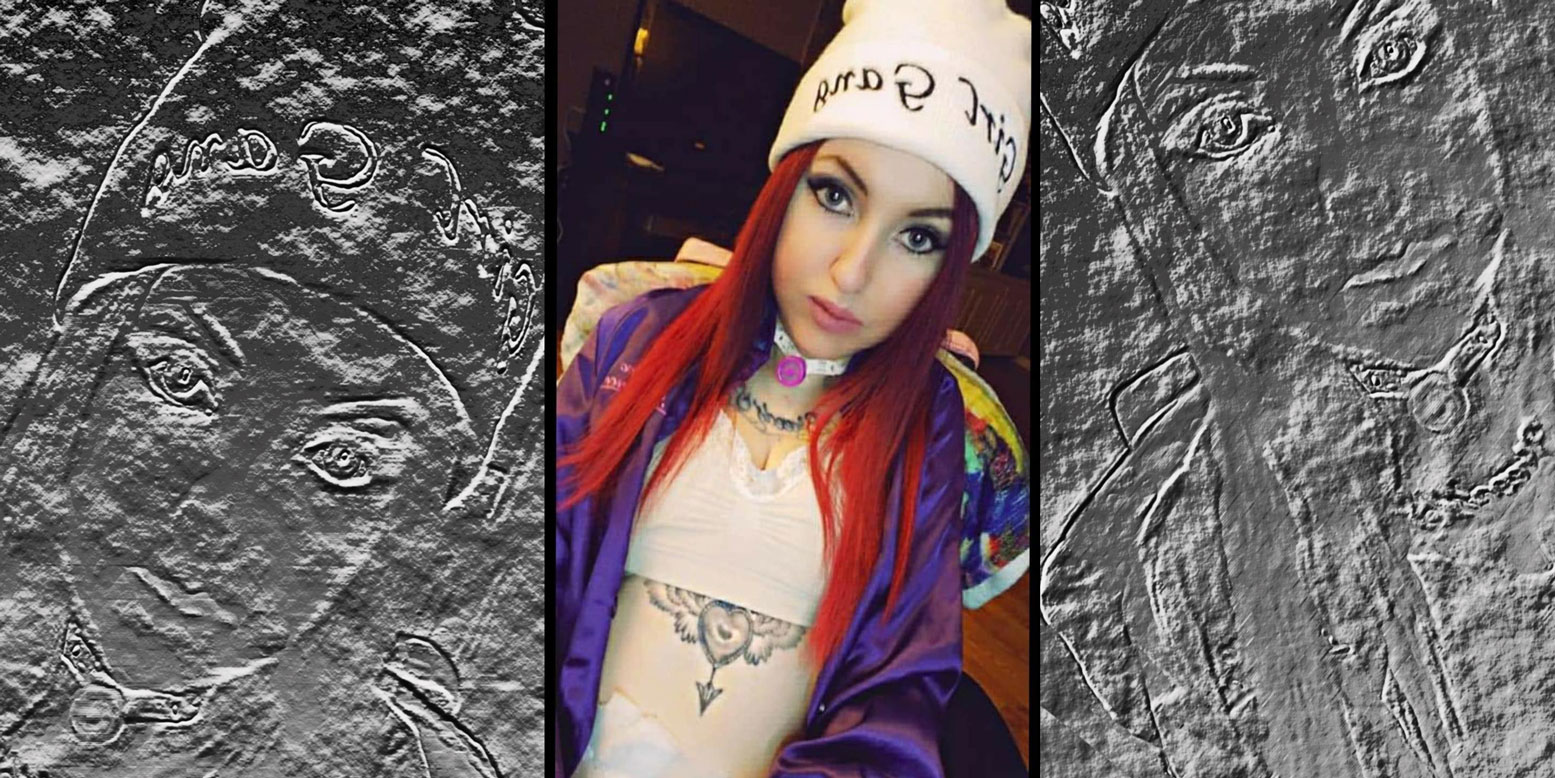 Last month we introduced you to Brandi Rae Toney, otherwise known as Brae. She is the remarkable young woman who recently celebrated her 29th birthday despite doctors predicting she would not live past the age of 2. She is still continuing to defy the odds and living life while battling spinal muscular atrophy.

Brae chooses to document many of her life experiences and emotions through body art, so it’s no surprise the following quote from Purvy Ranaga is one of her favorites:  “Life is a canvas. It’s up to you what colours you choose to paint this canvas of life into a beautiful masterpiece.” 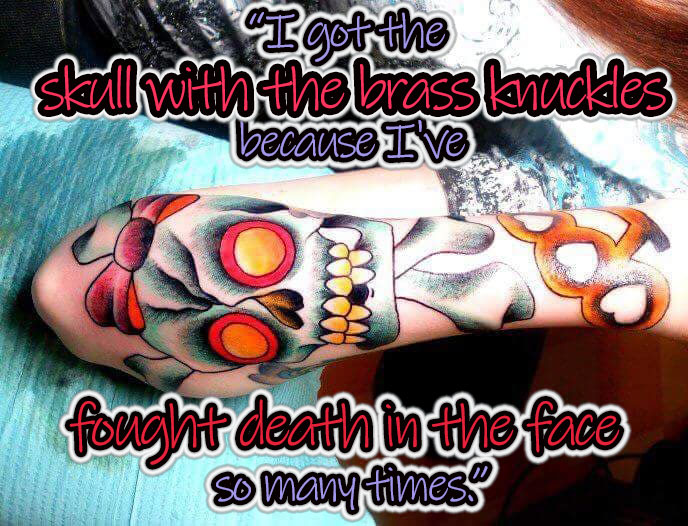 Like warpaint, Brae’s tattoos tell the story of the battles she has overcome. (photo courtesy Brae Toney)

Brae has several favorite tattoo artists including Dave Clark in Ft. Walton Beach, Florida, Azha Sanders from Brookhaven, Mississippi, and Sizer Yerger, formerly of Monroe, Louisiana. Each has created masterpieces on various parts of her body that illustrate important parts of Toney’s life, a life that is surprisingly normal for a young woman her age and a life so many predicted she would not be living. 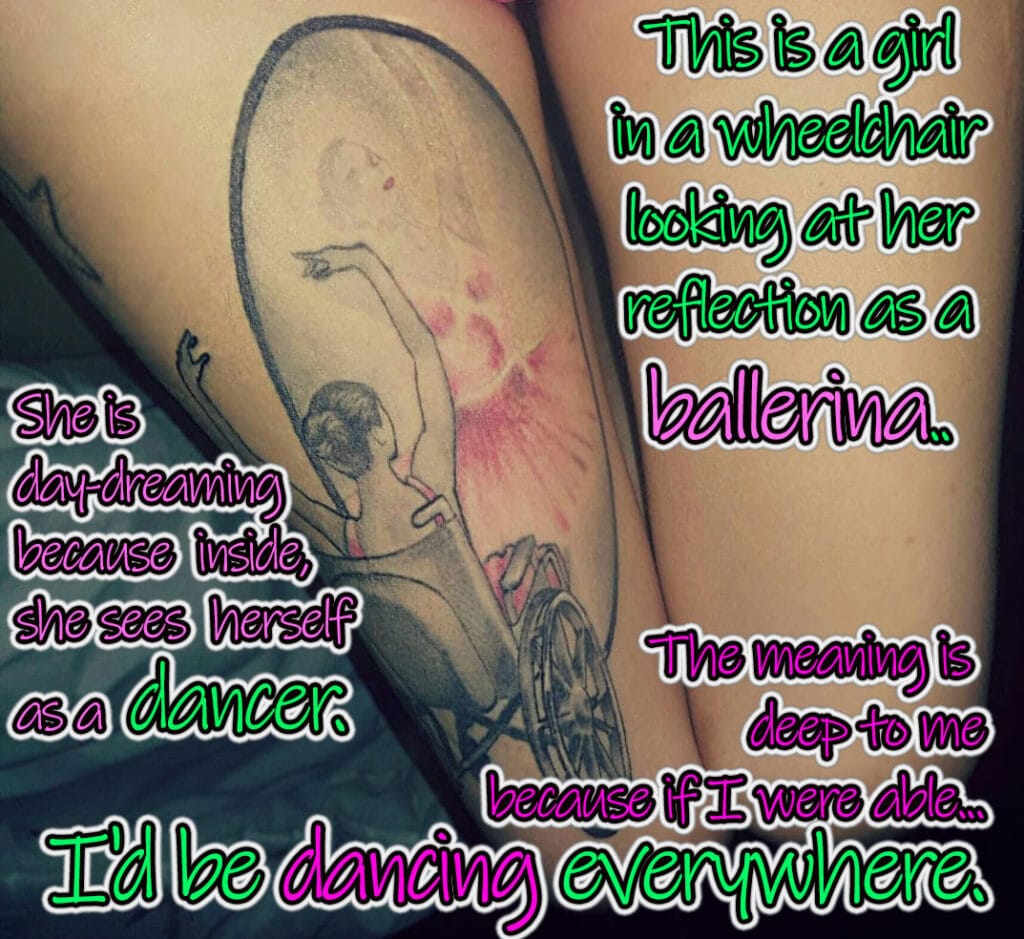 Each of her tattoos holds a significant meaning for Brae, but none more so than her son’s memorial tattoo.

“I was with a guy for five years on and off. We ended up getting pregnant, but the pregnancy was literally draining the life out of me, and in order to save my life we had to induce labor. I was far too early for my baby to make it,” Brae said. “A lot of people don’t see wheelchair users as romantic or able to live a normal life but I’m 29 years old, I’m mentally capable of making my own decisions, and I live my life just as anyone else would.” 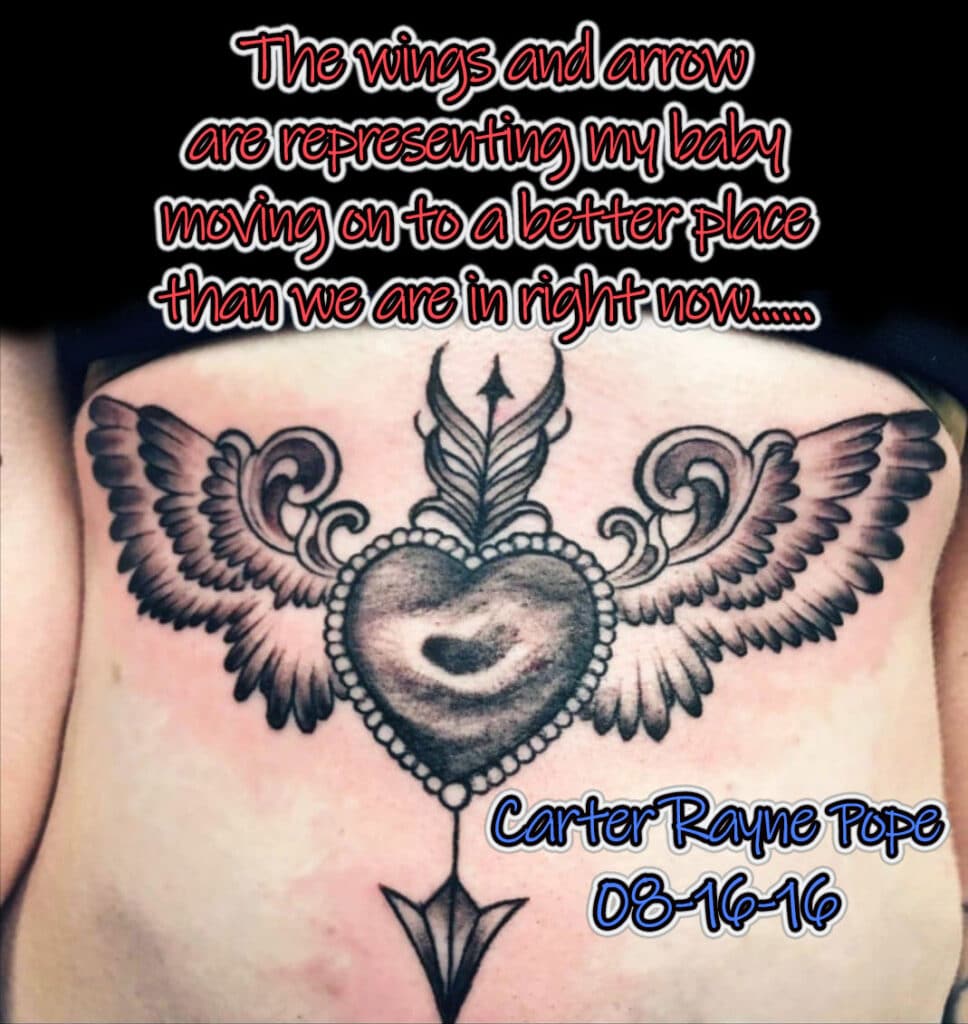 Another Ranaga quote that Brae embraces is “Every life is a canvas and every interaction is a brush; therefore we’d be wise to consider how we handle the paint.”  And when it comes to Brandi “Brae” Toney, it is certainly handled with care. 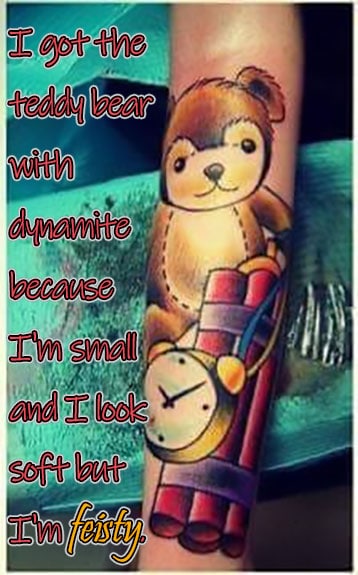 We invite you to visit Brae’s website at www.inked-babydoll.com and learn more about her and her fight against SMA. Next in our series, we will learn about the experimental medicine she is trying and how it is impacting her life. 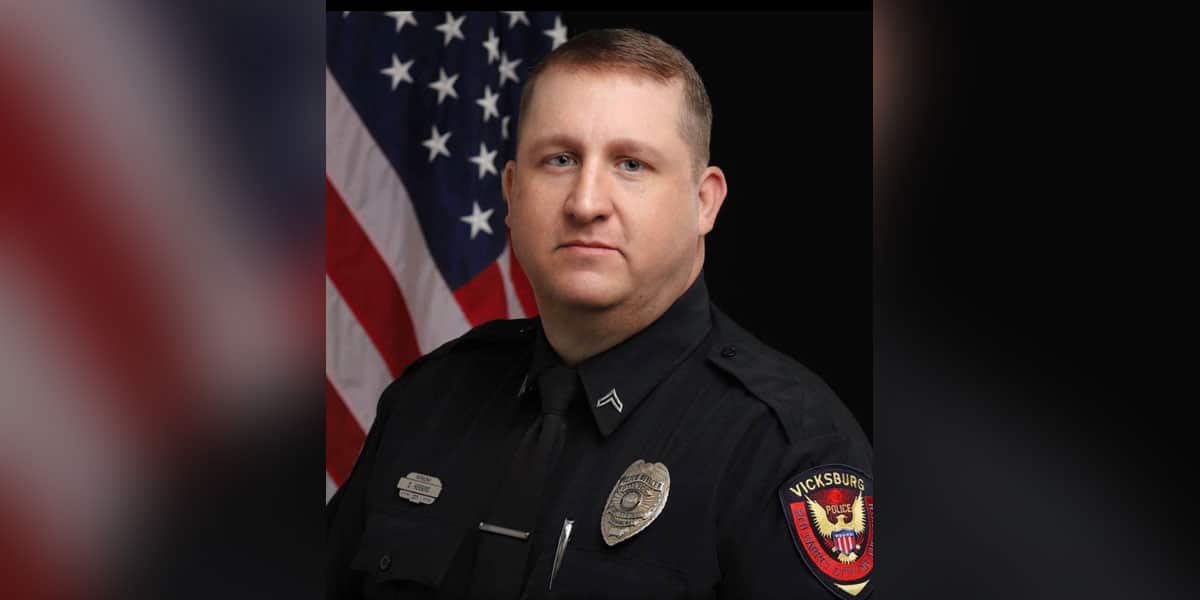 It was fixed in Donnie Heggins’ DNA to be in law enforcement.

The Vicksburg native has been around law enforcement officers for as long as he can remember.

“My dad was an investigator then chief deputy for the Warren County Sheriff’s Department,” Heggins said. When I was in Junior High, about the mid ’90’s, my brother started with the department, so I got to see what the job was like.”

Heggins knew from a very early age he would follow in his father’s and brother’s footsteps. His brother, Billy Joe Heggins, is the chief deputy for the Warren County Sheriff’s Department. Donnie’s first cousin, John Heggins, is also involved in law enforcement and a Warren County Constable.

Donnie, like his father and brother, started his law enforcement career at the Warren County Sheriff’s Department in the Juvenile Detention Center.

Heggins father always had a working K-9 in the household. Seeing his father work with the K-9’s sparked an interest in going into K-9 handling, which later landed him a job with the Vicksburg Police Department Narcotics Division.

“My love for dogs, especially working dogs, really led me to narcotics,” he said.

Heggins has been with the Vicksburg Police Department for approximately nine years. He is a narcotics investigator and K-9 handler to his 4 year old Dutch Shepherd, Kilo.

“She is with me 24/7 and our bond is very strong,” Heggins said. “She really gets along with my family; she’s my best friend.”

Kilo knows when it is time for work and time to play.

“When we are home she is a big playful dog with my kids,” he said.

His love for training dogs does not stop at the narcotics division. Heggins is a certified official with the National Narcotic Detector Dog Association. With this association, Heggins can certify any dog as long as they work for a law enforcement agency or private security firm.

“I have certified dogs in Louisiana, of course Mississippi, Alabama, and I recently did one in Arkansas,” Heggins said.

Heggins has been married for 19 years and has three sons ranging from 18 years old to 7 years old. He mentioned the hours of this job are not for the faint of heart and he owes all his success to his wife.

“The hours we work are crazy and having three kids, my wife is our rock,” Heggins said. “If it wasn’t for her I wouldn’t be able to do this job that I love so much.”

Even with the crazy hours, Heggins could not see himself working any other job and shared his advice for anyone wanting to go into law enforcement. 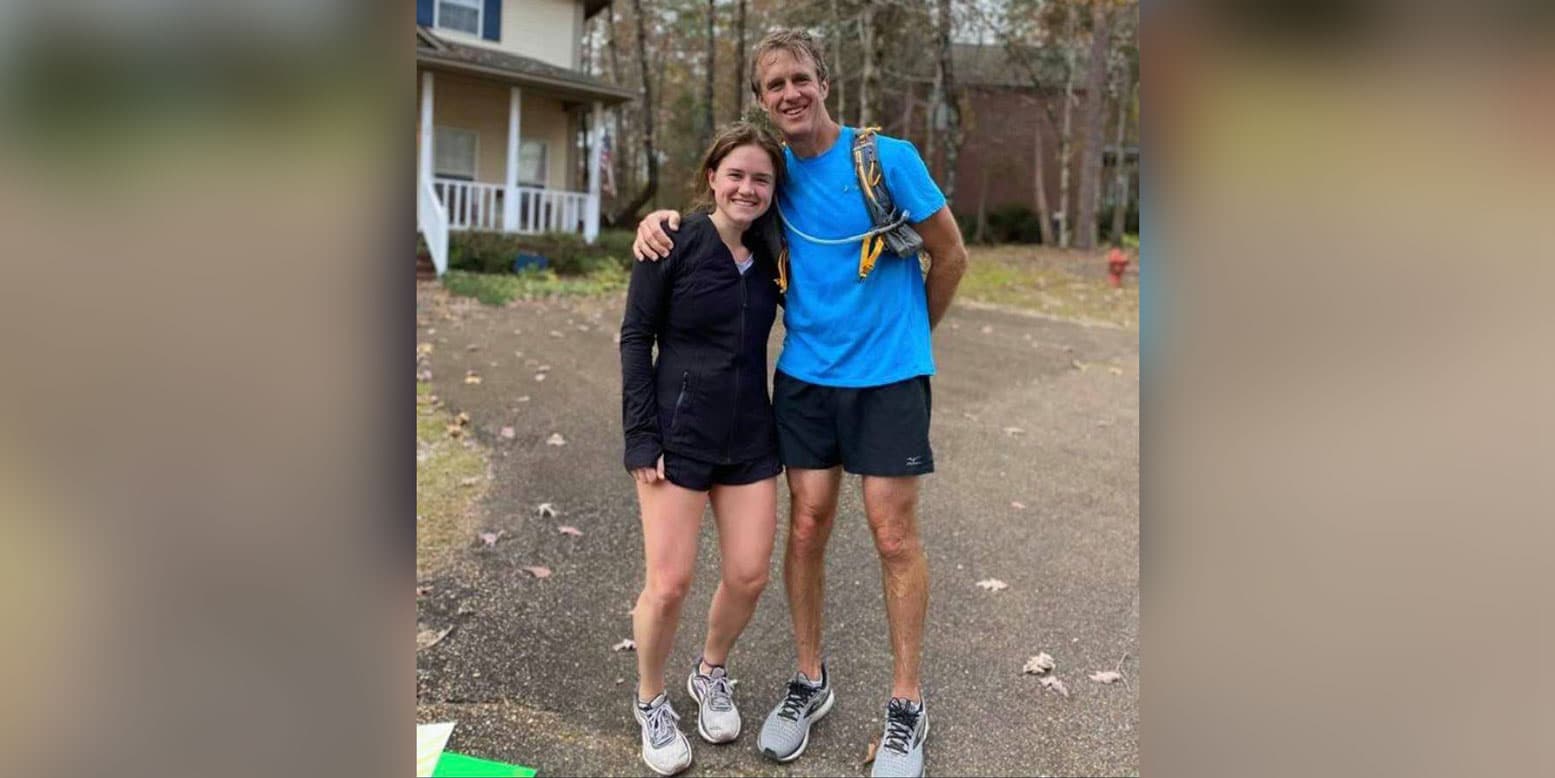 Both Anna Kate and Phillip began training in June during the height of the pandemic. They met up over some weekends in places such as Lake Bruin, Louisiana to train in order to prepare for what would be Anna Kate’s first marathon.

The two traveled to Oxford, Mississippi  last weekend where they had plenty of supporters cheering them on.  Anna Kate and Phillip ran for 4 hours and 58 minutes with a total distance of 26 miles.

During the race, Anna Kate and Phillip made it to Taylor, Mississippi where some of Anna Kate’s closest friends had signs and were cheering them on. Phillips’s wife, Kara, was waiting at the finish line to congratulate her daughter and husband. 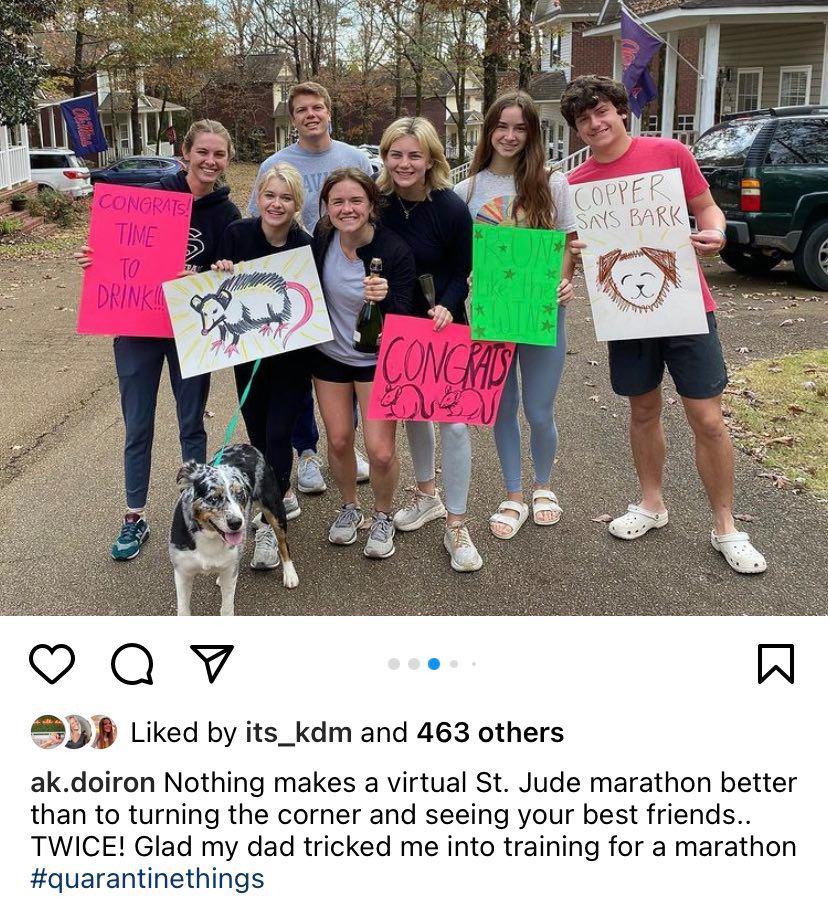 Anna Kate, who was the 2017 valedictorian of St. Aloysious, is now a senior Integrated Marketing Communications major at Ole Miss. After the successful race, the Doiron family was able to stay in Oxford and continue celebrating as the Ole Miss Rebels defeated South Carolina 59-42.

The annual fundraising event began in 1977 as the Memphis Express Marathon, and became St. Jude Memphis Marathon in 2002. Since taking over the race, more than $60 million has been raised to support the hospital and allow countless children to receive free healthcare.

With the introduction of the worldwide Covid-19 pandemic, St. Jude marathon organizers knew they could not cancel the hospital’s largest fundraiser. Instead, they reinvented the way racing is done. The 19th annual St. Jude Memphis Marathon® Weekend has transitioned to an interactive virtual experience taking place over a four-month period, beginning in August, and culminating with a virtual race day on Saturday, December 5.