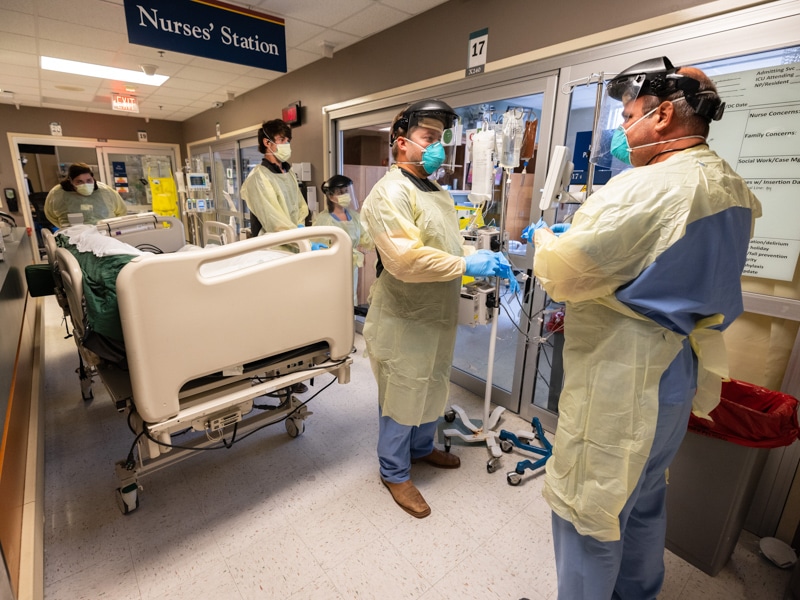 The state would be better off expanding Medicaid even if the federal Build Back Better bill that would provide health care coverage for poor Mississippians becomes law, a diverse group of health care advocates claim.

Among the provisions in the $1.75 trillion Build Back Better legislation, which passed the U.S. House last week and faces a close Senate vote in coming days, is “workaround” language to provide health care coverage to primarily the working poor in the 12 states, including Mississippi, that have not expanded Medicaid.

But groups like the Mississippi Hospital Association and the Mississippi Center for Justice still maintain that it would be to the state’s financial advantage to expand Medicaid. A provision of the Build Back Better bill increases the federal match from 90% to 92% for the existing Medicaid program, meaning Mississippi could stand to gain hundreds of millions more in federal funds if the state’s leaders chose to expand.

“Build Back Better is not a panacea,” said Vangela M. Wade, president and CEO of the Mississippi Center for Justice. “The provisions that close the coverage gap are only temporary. Yes, it is a victory for working Mississippians, but it is a fleeting one. Mississippi’s legislators must enact Medicaid expansion at the state level.”

Wade continued: “For hold-out states like Mississippi, the financial incentives to expand Medicaid are enormous… We are in a position to greatly benefit both the overall health and economic well-being of our state. Medicaid expansion is a no-brainer.”

In an attempt to close the health care coverage gap, Build Back Better allows people earning up to 138% of the federal poverty level — which equates to up to $17,774 per year for an individual or $24,040 for a couple — to obtain health insurance at no cost to them through the health insurance exchanges that were established through the Patient Protection and Affordable Care Act, better known as Obamacare.

The federal government would pay all the costs for the health care coverage offered to the poor in the Build Back Better legislation.

Mississippi is one of 12 primarily Southern states that have refused to expand Medicaid. It is estimated that expansion would provide coverage for between 150,000 and 300,000 Mississippians, primarily the working poor. The federal government, in recent months, has upped the financial incentives for the 12 states.

While state leaders, led by Gov. Tate Reeves and House Speaker Philip Gunn, maintain the state cannot afford the expansion despite studies, several studies by leading economic experts show that Medicaid expansion would effectively pay for itself while significantly aiding both the Mississippi economy and treasury.

Tim Moore, chief executive officer with the Mississippi Hospital Association, said while he applauds provisions of the Build Back Better legislation providing more health care coverage to Mississippians, the state still will be penalized if Medicaid is not expanded.

Under the legislation as it is currently written, Mississippi hospitals would lose about $300 million in federal funds that are designed to help them pay for uncompensated care or care for those with no insurance and no ability to pay for the care. The loss of the funds for uncompensated care could be viewed as “a hammer” to try to convince the final 12 states to expand Medicaid.

“While we are very supportive of increasing access to coverage for all Mississippians, it should not come at the expense of hospitals across our communities that continue to care for large numbers of children, the poor, the disabled and the elderly,” Moore said.

There is language in the Build Back Better legislation that increases the matching rate paid by the federal government for the costs of treating people covered through Medicaid expansion from 90% to 92%, resulting in additional savings for the state.

“We can implement a plan (through Medicaid expansion) that is more descriptive of the needs of Mississippians or our tax dollars can fund the federal plan. For true conservative Mississippians, I think the choice is clear,” Moore said.

Build Back Better also would enhance federal funding for people who have health coverage through the ACA exchanges.

U.S. Rep. Bennie Thompson, a Democrat and only member of the Mississippi congressional delegation to vote for Build Back Better, said, “The Biden Administration has once again delivered for Mississippi. It was my honor to vote for legislation that presents such tremendous opportunities for our state. Now the Senate has the opportunity to support the Build Back Better Act, and it is my hope that they do so. Not just for the benefit or our state, but for the entire country.”

Editor’s note: Vangela M. Wade is a member of Mississippi Today’s board of directors.