Warren County emergency responders met on Saturday to discuss the potential impacts to the Vicksburg-Warren area after Hurricane Ida makes its way through.

The National Hurricane Center is confident in its forecast of the storm. Five inches of rain is anticipated in the area, creating a significant threat of flooding and flash flooding which will exist from Sunday through Tuesday. Big Black near Bovina will most likely have minor flooding.

“Sometime tomorrow (Sunday) morning or towards the noon hour we’re going to start seeing some of the earlier feeder bands, we’ll start seeing the wind pick up, we’ll have some rain,” stated Warren County Emergency Director John Elfer. “The conditions will continue to deteriorate throughout tomorrow into the overnight hours, Sunday into Monday.”  Elfer added, “It looks like the peak, the worst of the storm, is going to be midday between about noon and 2 p.m. on Monday and then continue all the way into Tuesday.

Among the threats brought in by the storm, the team anticipates multiple trees to be down and power outages which may last for several days. Those on oxygen or medically rely on electricity should prepare to be prepared to address their needs during this time. Ida is expected to impact the area through Monday. 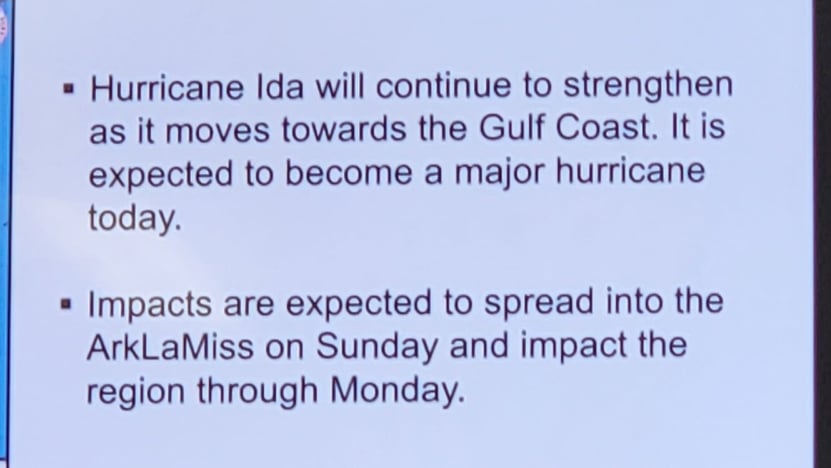 “Every one of these tracks puts the storm in Vicksburg,” stated Fire Coordinator Jerry Briggs.

Residents from Louisiana were given an evacuation order. Some Mississippians are also following their lead. Reports indicate U.S. Highway 61 and 27 are already experiencing heavy traffic heading north.

The need for everyone to be prepared by midday Sunday was addressed. The earliest time of arrival is stated to be Sunday afternoon. 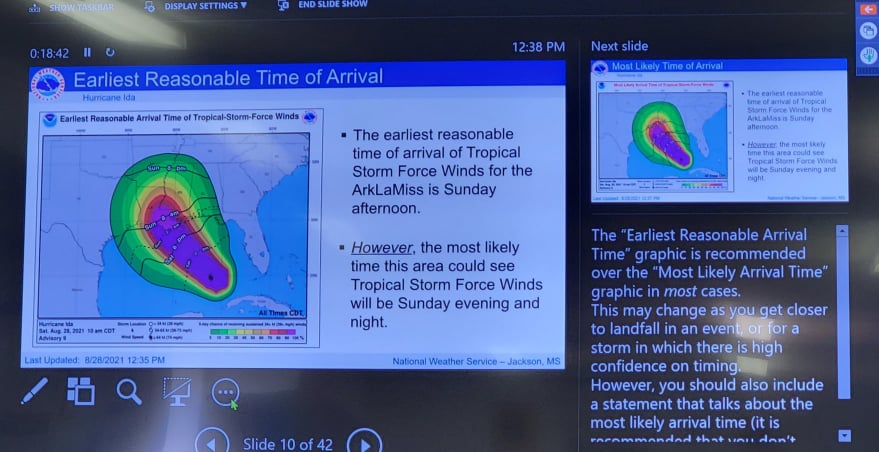 Equipment has been pre fueled and staged throughout the county so the risk of it being stranded in one location won’t become an issue. Road closure equipment and signage is on standby. Constant contact with 911 will be maintained for rapid deployment where help is needed.

“The Vicksburg Fire Department is increasing staffing on Sunday in preparation for tropical storm weather. We have begun additional fleet and equipment preparations for likely hood of down trees, power outages, fuel shortages, flash flooding, and other hazards,” stated Fire Chief Craig Danczyk.

“We have a high-water truck. We’ve moved it closer to some areas that we think may flood if we have the rains that we’re anticipating. We have a boat. We’ve moved it to town, away from the lake – where it needs to be, closer to where we think we are going to need it. We’ve brought out some other vehicles, made sure we have life vests, if we do have some flash flooding in some low-line areas, so they’re prepared,” said Warren County Fire Coordinator Jerry Briggs.

“We have a backup plan if the towers are taken out here in Warren County, we’ll be going to what is called our ‘eight-call channels’, and that is radio to radio, so that won’t involve towers,” stated E-911 Coordinator Shane Garrard.

Elfer encourages residents to stay at home during the storm. “We want to stress to everybody, if you don’t have to be out in it, stay at home. Now is the time to prepare. If you wait until tomorrow, you’ve waited too long.” Elfer went on to state that a comprehensive checklist is available on the MEMA website.