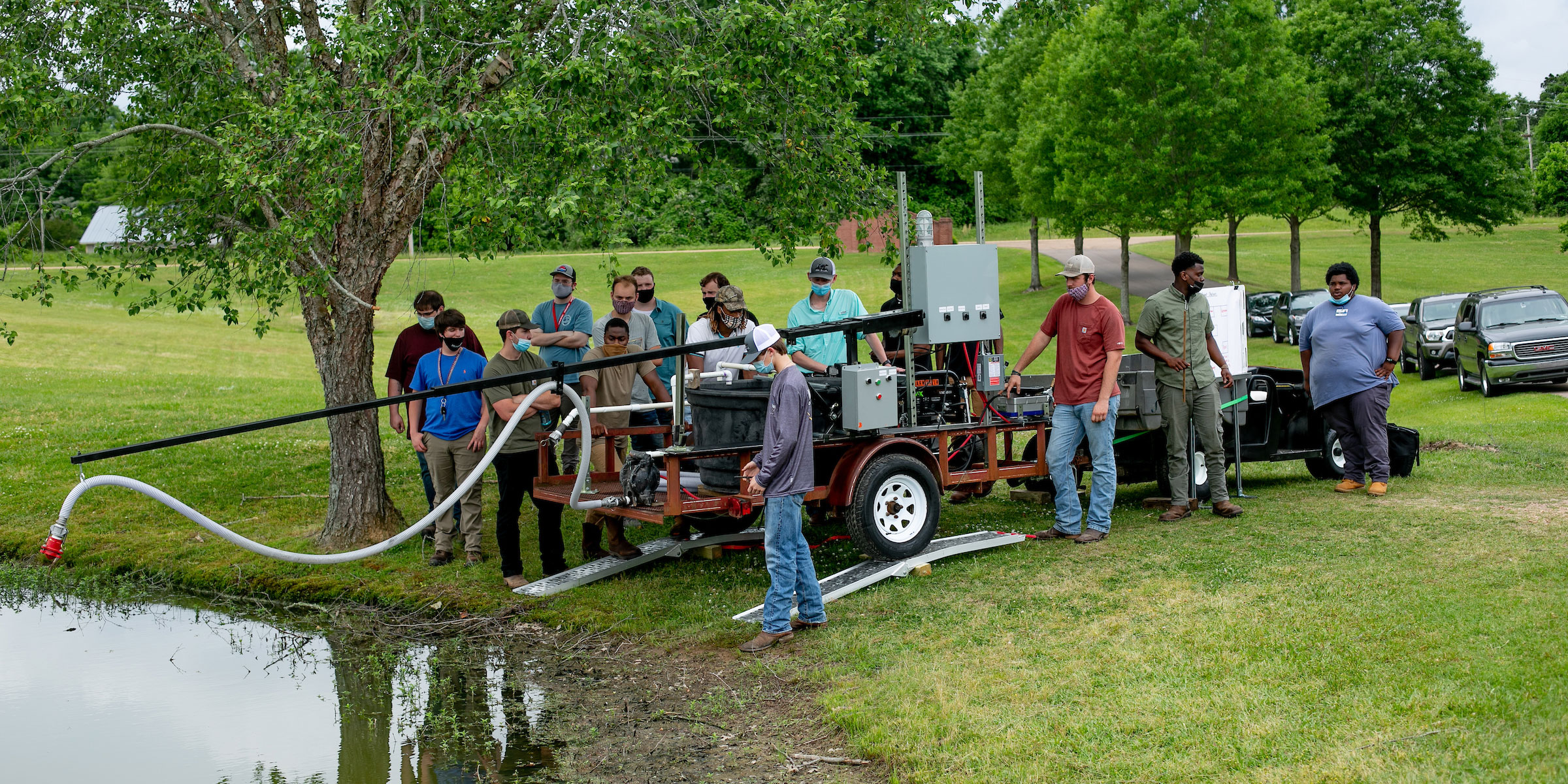 The combined ingenuity of six Electro-Mechanical Technology classes was on display April 29 as students demonstrated a mobile pumping station at McKenzie Pond on the Raymond Campus.

A motor control apparatus was connected to a generator-powered mobile power supply and hydraulics systems to make for a fully usable pumping system that moved water in and out of the pond, located next to McKenzie Arena along Seven Springs Road. 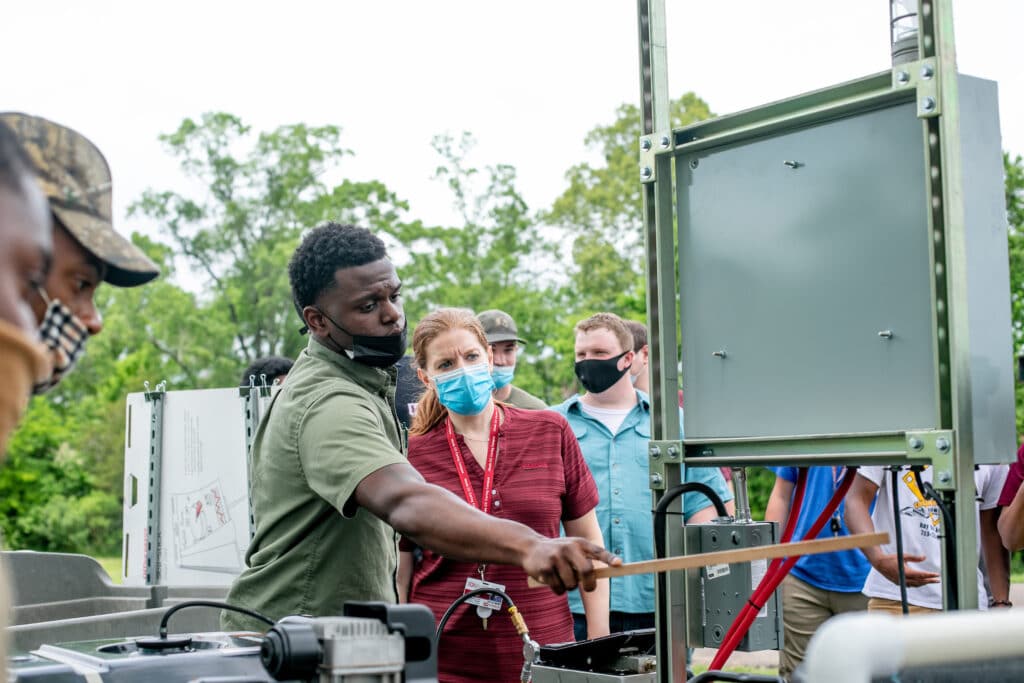 Markeece Wilson, of Utica, is recognizing the wiring of the Sump Pump that was wired into the Hoffman Enclosure. (Hinds Community College/April Garon)

“Fluid power is basically the center of this whole project,” said Garrett Hopkins, of Vicksburg, a student from the fluid power class. “We have a diaphragm pump, centrifugal pump and our sump pump. The intake pump will pull the water into our reservoir. We have options with our sump and centrifugal pumps to pump the water back out into the lake.”

Switches and relays were connected to a boom lowered into the pond to move the water in and out. Power tools such as band saws and drill presses ere used to create the project in just eight weeks by students in the PLC, motor control, fluid power, industrial control, power tools and troubleshooting classes.

The demonstration provided vital hands-on instruction to students learning to operate equipment used in the program, including the versatile PLC, or programmable logic controller, which can be used to write a code to automate the entire operation with minimal human manipulation.

“The idea was to show there are different types of pumps for different applications,” said Jeffrey Hoovler, Industrial Maintenance instructor, who prompted his students to point out the function mimics what the average pumper-style fire truck does to move water from one source to another. It can also be used for agriculture purposes, to manage water used for cattle, for example.

A key lesson for students was to show how each mechanism involved had real-world applications. 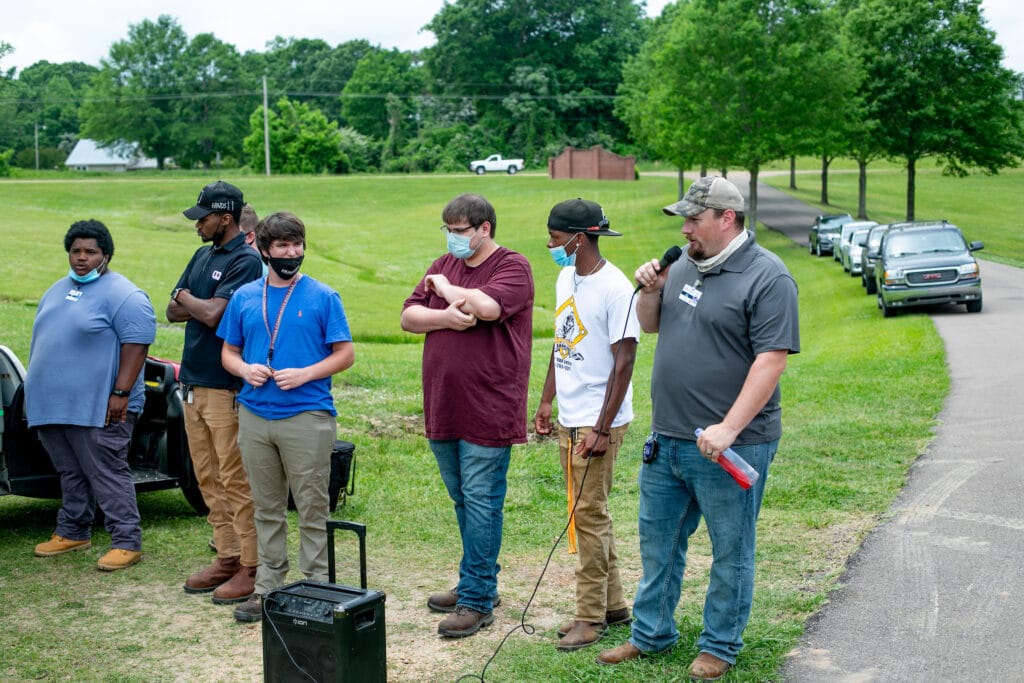 “It showed all the different types of pumps, different uses for your pumps as well,” said Alan Walker, also of Vicksburg, a student in the industrial control class. “So in case you don’t have an electrical supply but an air supply, you can run the diaphragm pump, which is run off air. It also showed how to wire your switches and relays.”

Pooling classes and knowledge in such a way promoted skills useful down the line in their eventual careers.

“I want to commend the students and instructors and the job they’ve done,” Vice President of Workforce & Community Development Chad Stocks told students. “We’re watching what they learned go into practice. We’re sharing the labs, we’re sharing equipment and sharing the knowledge. We see from combining these classes they learn to work together.” 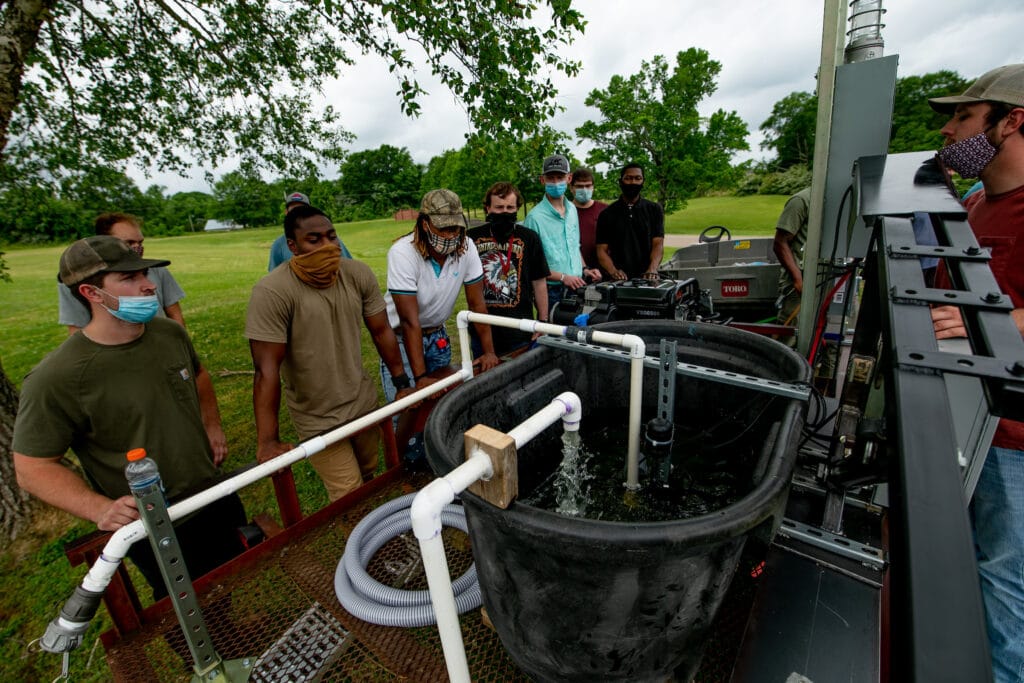 Students monitored the water level of the reservoir so once float switch is activated, they can start the process of pumping water back into the pond using the Centrifugal Pump. (Hinds Community College/April Garon)

Some supplies used in the project, such as valves, switches and plugs, were funded through a Workforce Opportunity for Rural Communities (WORC) Initiative grant from the U.S. Department of Labor’s Employment and Training Administration in partnership with the Delta Regional Authority.

It also put the students’ classroom materials to work in a positive way, instructors said.

“We incorporated the textbook material and apply it to real life applications, while the students receive hands-on training in fabrication, troubleshooting, installation, and testing,” said Frederick Jefferson, Industrial Maintenance instructor.