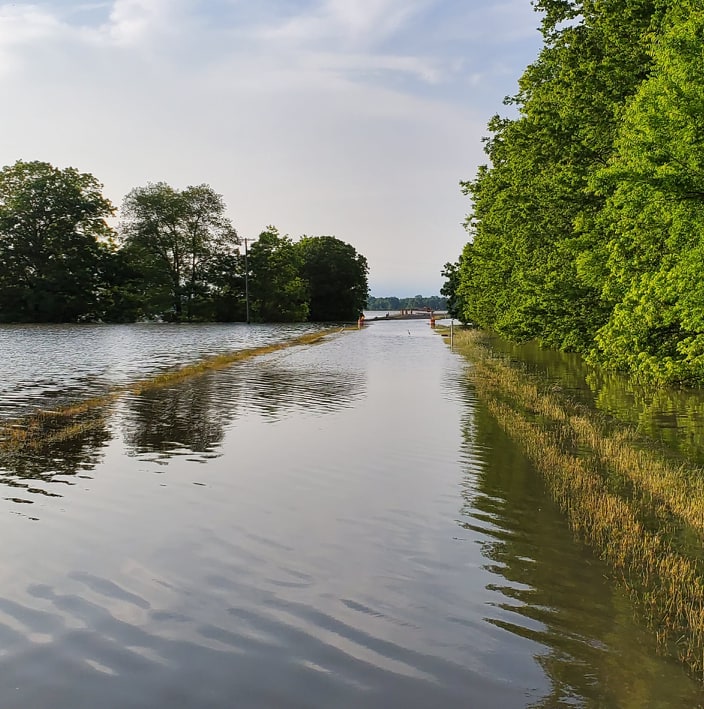 Last night’s heavy storms caused power outages all over the area. Some 11,000 Entergy customers in Mississippi lost power for a period of time with 5,700 still without power around the state. That includes 1,600 people in Warren County. Almost all of them should have power restored later today or tomorrow.

Like the rest of the South Delta, Eagle Lake is in the fourth month of the historic Backwater Flood of 2019. Residents have been fighting flood waters, mandatory evacuations, watching their property go underwater and seeing the local wildlife wither away. Last night, residents there were among those who lost power in the storm. Today, crews with Twin County Electric have been searching for the source of the power loss.

What they’ve discovered is more bad news for folks at Eagle Lake.

Four power poles are down on Low Water Bridge Road. That power line is the main line to Eagle Lake and those poles are in flooded fields.

It takes special equipment to fix poles in flood waters, and Twin County doesn’t have it.

“We don’t have the equipment to fix that,” said Tim Perkins, the General Manager at Twin County, who has been with the company for 25 years. “So, we are reaching out to other electric companies and contractors who may have that equipment.”

So far the company has contacted three companies with no success.

Twin County from their webpage

“We will get someone, and we will get them as quick as we can,” Perkins said, but he admitted there is no guarantee of when they will find someone or how long it will take to get the job done. “They have to travel here, bring their equipment and set up to fix the problem,” he said.

“I don’t even want to venture a guess on the timeline.”

Looks like this is just one more thing the good people of Eagle Lake will have to endure during this unprecedented flood.

City Landscaping Hard At It