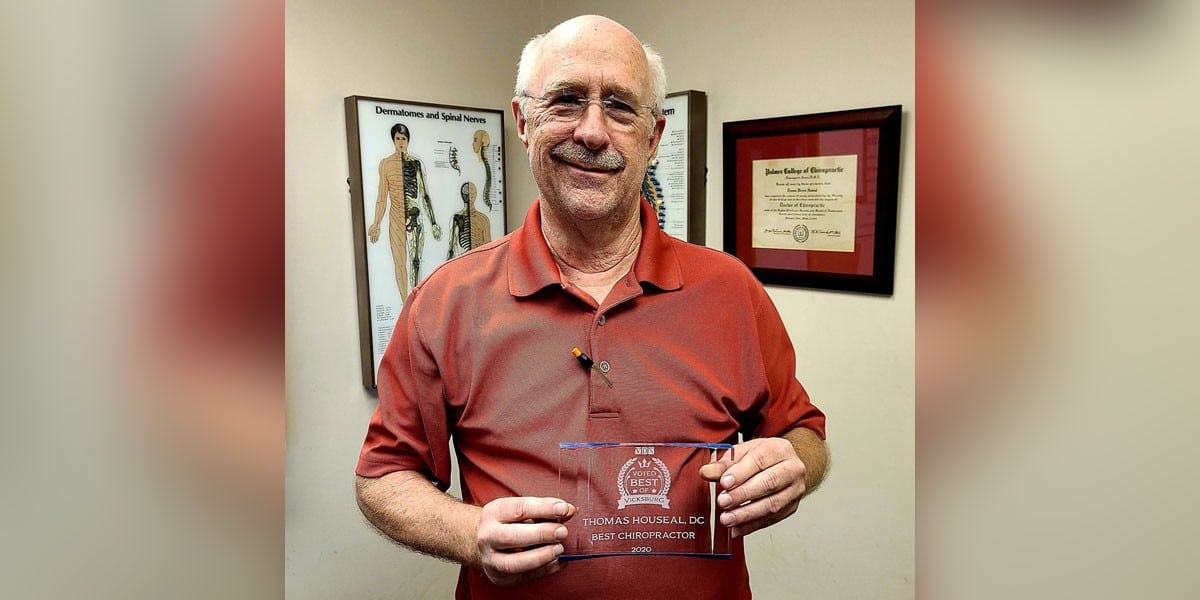 Dr. Thomas Houseal has been a chiropractor since 1976, 43 years.

“I’ve been throughout the entire state, working for different doctors until I opened my own place here 21 years ago,” he said. His clinic, New Health Chiropractic Center, is located at 1825 North Frontage Road.

Originally from Davenport, Iowa, Houseal said his coming to Mississippi, and eventually Vicksburg, was a matter of fate.

“It was just meant to be,” he said. “Everything, every step was in order.”

Houseal met his wife, Lucy, in Hattiesburg just before he moved to Booneville.

“We had a six- or eight-month long-distance relationship,” he said. “I called her every night at the same time.”

The couple married Oct. 5, 1996. She works alongside her husband at the clinic.

“We sort of designated her the personal injury specialist,” Houseal said, adding that she follows up with patients to find out how they’re doing.

Holly, the clinic’s front-desk person, has been there for 14 years. “She’s a great asset,” he said.

While many people associate chiropractic only with back problems, Houseal indicated that the practice has far reaching implications for the entire body.

“My favorite case to get my hands on are headache cases because they respond so well to chiropractic,” he said.

Chiropractors perform adjustments to the spine or other parts of the body with the goals of correcting alignment problems, easing pain and supporting the body’s natural ability to heal itself, according the MedlinePlus.com.

“My miracle case was a 3-year-old child that had asthma, Houseal said. “The parents brought him in because they were exhausted because he was on breathing treatments. We found out through exam and X-rays that he had a misalignment in the mid-back area, and those nerves go to the lungs. So, we did what we did, and we found he was a heavy milk drinker, so they cut back on that to a degree. And so, within three months he was off all breathing treatments.”

Some patients view chiropractic as a “last resort” treatment “because they tried the medical route,” he said, and it didn’t provide relief. Others may have been told they needed surgery and are looking for alternatives before going under the knife.

Like other medical specialists, chiropractors earn their D.C. (Doctor of Chiropractic) after four years of postgraduate study. They also serve a one-year internship.

Houseal, now 68, has no plans to retire soon. He will continue his practice “as long as I can because there aren’t too many younger chiropractors coming into the state,” he said. “Most of us are up there in age.”

If you decide chiropractic could be good for what ails you, Houseal said the process is straightforward. “Exam, X-rays, therapy,” he said. To schedule an appointment, call 601-634-1600.

Don’t forget to cast your votes for the Best Automotive Sales & Service providers in September! Every month VDN will have a new category to highlight the professionals that serve our community on our Cast Your Vote page.

For Cooper Jamison, his Bovina Elementary ‘family’ is everything