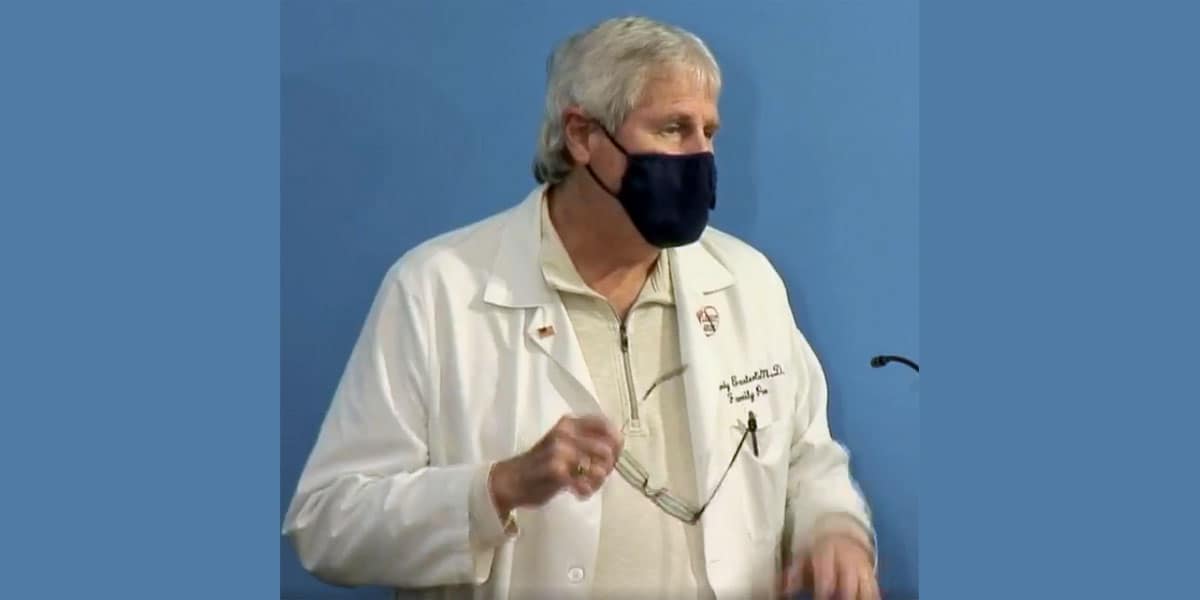 Dr. Randy Easterling at Thursday's Board of Mayor and Aldermen meeting. (photo via VTV screen grab)

The doctor made a presentation to the Vicksburg Board of Mayor and Aldermen Thursday morning about the virus. In his report, he recalled disasters in recent memory that claimed numerous lives, including the Vietnam War (58,000 American soldiers dead), the 9/11 attacks (2,977 dead) and hurricanes such as Camille (259 dead) and Katrina (1,833 deaths).

Wednesday, more than 3,000 people died from the virus across the country in one day, a number that has become increasingly the norm.

“In the United States, we have exceeded, or very close, a 9/11 every day for the past two weeks,” Easterling said.

“We haven’t seen anything like this in 102 years,” he added. The last pandemic was the so-called Spanish flu in 1918.

“At the end of this (COVID-19) pandemic, we’re speculating that half a million Americans will die.”

Easterling said the effects of gatherings during Thanksgiving and Christmas will be felt severely, especially in hospitals, many of which are already at capacity or above. Hospitalizations from Thanksgiving exposures will hit next week, he said. With additional gatherings around Christmas and New Year’s Eve, Easterling expects we haven’t seen the worst yet.

“Buckle your seatbelts, because mid-January is going to be a disaster,” he said.

The doctor recalled that in February, predictions were that 2,500 people in Mississippi would die from COVID-19. At the time, he told his wife that there was “no way in the world that we’re going to lose 2,500 Mississippians from this virus.

Easterling also said that many people believe hospitals being overloaded doesn’t apply to them if they don’t have the virus.

“It applies to you more than it does a COVID patient,” he said, because as more and more COVID-19 patients are admitted to hospitals, there are fewer and fewer beds available for other illnesses and accidents. The University of Mississippi Medical Center in Jackson, the state’s largest hospital and only level one trauma center in Central Mississippi, is at the point of turning patients away, he said.

Front line doctors and nurses are “worn to a frazzle. They’re carrying the brunt of this,” he said.

“That’s evidence based,” he said. “That’s science. Somebody tells you otherwise, show me the studies.”

“Right now, probably the most important thing to add to this list is (avoiding) social gatherings,” he added.

Search for two hunters on the Mississippi takes its toll