Deaths came uncomfortably close to the 1,000 predicted earlier this month with 980 statewide. The county reported 21 deaths in December, the equivalent of those reported in August, tying them as the deadliest months of the year for Warren County.

December saw a one-day record of new cases with more than 3,000 statewide for the first time Dec. 30. Warren County also reported a record one-day new case count of 88 the same day, smashing the previous one-day high of 56 reported in August.

Warren County’s 14-day total of new cases is 500. The number of cases reported in December, 956, nearly doubles July’s previous high of 521. Trends predicted a total case count in December of more than 900.

The county is on the governor’s list of hot spots that include all but four of Mississippi’s 82 counties — Claiborne, Issaquena, Sharkey and Tunica — three of which neighbor Warren.

COVID-19 is one of the state’s leading causes of death at this time, according to State Health Officer Dr. Thomas Dobbs. Thursday, Dobbs tweeted that hospitalizations for severely ill COVID-19 patients are also in record territory.

“Please be safe this New Years. We all know what to do…”

Please be safe this New Years. We all know what to do… pic.twitter.com/GB29eiMcxp

Hospitalizations totaled more than 1,460 patients Tuesday, surpassing the July high of around 1,250 by at least 210 patients. Hospitals across the state — including Merit Health River Region in Vicksburg — are reporting that no ICU beds are available for any seriously ill or injured person, not just COVID-19 patients.

Mississippi’s health care system is overwhelmed, with another surge expected after the Christmas and New Year holidays.

State health officials expect cases, hospitalizations and deaths to go even higher in January after the Christmas and New Year holidays and are strongly urging Mississippians not to hold or attend parties or any gatherings that include people not in their immediate families.

Nationally, the cumulative cases in the U.S. have soared to more than 19.7 million, with some sources putting the figure as high as 20 million. Numbers of new infections, hospitalizations and deaths continue to rise although the rate of new cases seems to be slowing slightly.

The number of people who have died in the U.S. since the beginning of the crisis is about 342,577.

At least 3,808 people died of the virus Tuesday in the U.S., and at least 229,349 new cases were reported. Holiday closures may have had an effect on the drop in new cases in the last 14 days, about 13%. The rate of deaths has dropped 9% in the past two weeks; however, the number of people hospitalized across the nation continues to rise. About 125,220 people were in the hospital for COVID-19, an increase of 10% in the past two weeks.

For the moment, the explosive growth in new cases seems to be slowing, but some states are still seeing record numbers of new cases. California, for example, has a seven-day average of new cases of 37,474, an increase of 1% over the average two weeks ago. The state accounts for more than 2.2 million cumulative cases and more than 25,000 deaths to date.

The rate of new infections in the Midwest and Mountain States continue to show improvement, while the South is emerging as one of the nation’s most affected regions. Tennessee has been seeing more cases per capita than any other state, and Alabama is setting records for new cases and deaths. Mississippi is among several states where new deaths are on the rise.

In Warren County, MSDH reported 51 new COVID-19 cases Thursday and no new deaths. The cumulative number of cases in Warren County to date is 2,692, and the county’s death toll is 78. The seven-day average of new cases in the county 42.9 per day, nearly nine times higher than in early November when the average was about five cases per day, and nearly four times higher than the beginning of December.

Statewide, MSDH reported 2,756 new COVID-19 cases Thursday, bringing the total cumulative confirmed cases in Mississippi to 215,811. The seven-day average of new cases is 1,880 per day, more than a third higher than the seven-day average a month ago, when the state’s numbers were already on the rise. The current averages far outstrip the numbers seen at the height of the last surge in July.

Deaths are a lagging indicator. During last summer’s surge, for example, July broke records for new cases. In August, deaths spiked. In August, the highest number of one-day deaths in Mississippi was 67 reported Aug. 25. The current surge began in Mississippi in late October, and the state is seeing record deaths in December, with 85 reported Dec. 29. November and December case numbers have exceeded cases reported in July, and December’s death toll has exceeded August’s by 167.

Of the 40 deaths MSDH reported Thursday, 38 occurred between Dec. 7 and Dec. 30 in the following counties:

An additional two COVID-19 related deaths occurred between Dec. 22 and Dec. 26 and were identified from death certificate reports.

New cases and deaths were reported to MSDH as of 6 p.m. Wednesday, Dec. 30. MSDH usually reports statistics on the COVID-19 coronavirus each day based on the previous day’s testing and death reports.

The number of Mississippians hospitalized for the virus as of 6 p.m. Tuesday, Dec. 29, was 1,463. The number includes 1,387 with confirmed cases of COVID-19 and 76 people with suspected but unconfirmed cases. Of those with confirmed infections, 321 were critically ill and in intensive care units and 208 were on ventilators. 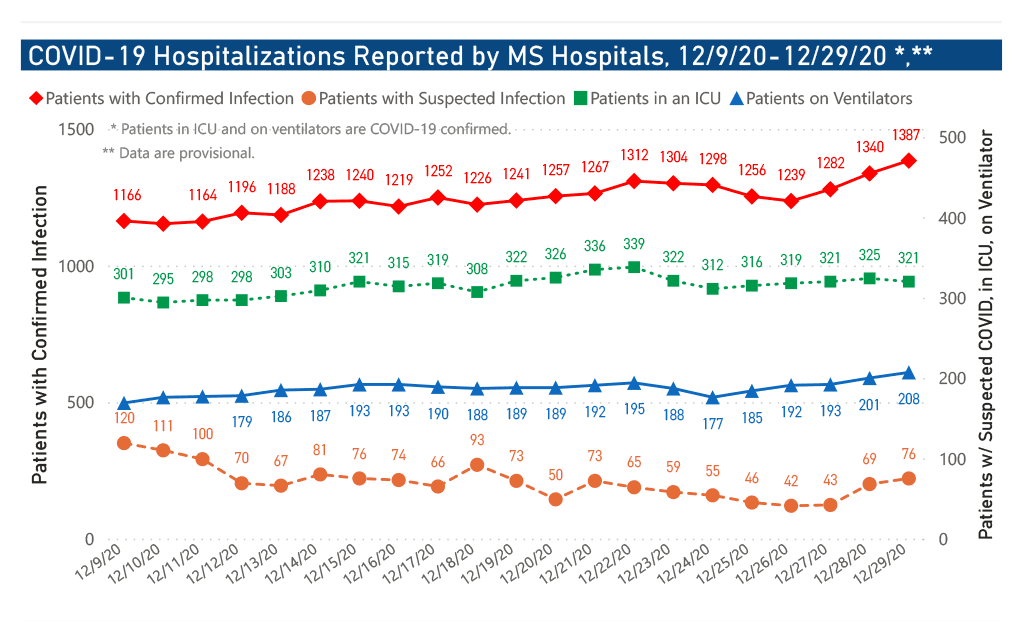 MSDH has estimated the number of people who can be presumed recovered from COVID-19 in Mississippi. That number is 167,263 through Sunday, Dec. 27. It represents about 77.5% of the cumulative 215,811 cases reported as of Thursday, Dec. 31.

The total number of Mississippians tested for COVID-19 (PCR and antigen tests identifying current infections) as of Thursday, Dec. 19, is 1,669,558 or about 56.1% of the state’s 2.976 million residents. MSDH reports statewide test results about once a week. Without daily updated numbers of tests, it is impossible to accurately calculate Mississippi’s positivity rate (positive results to tests, seven-day average); however, the estimated rate was 20.1% Sunday, according to Johns Hopkins University. The national rate was 11.3% Wednesday, and 5% or lower indicates adequate testing.