Residents of Cypress Hill apartments at 402 Locust Street are complaining their landlord is ignoring their pleas to repair the units.

Jessica Berry and her children moved into the apartments a few months ago, “I only did it (moved here) because me and my kids was homeless and we didn’t have nowhere to go. This was my last option.”

Berry and other residents with similar stories feel as though their landlord isn’t fixing the problems at Cypress Hill and called the City of Vicksburg to complain about the living conditions. They also reached out to the Vicksburg Daily News to tell their story. 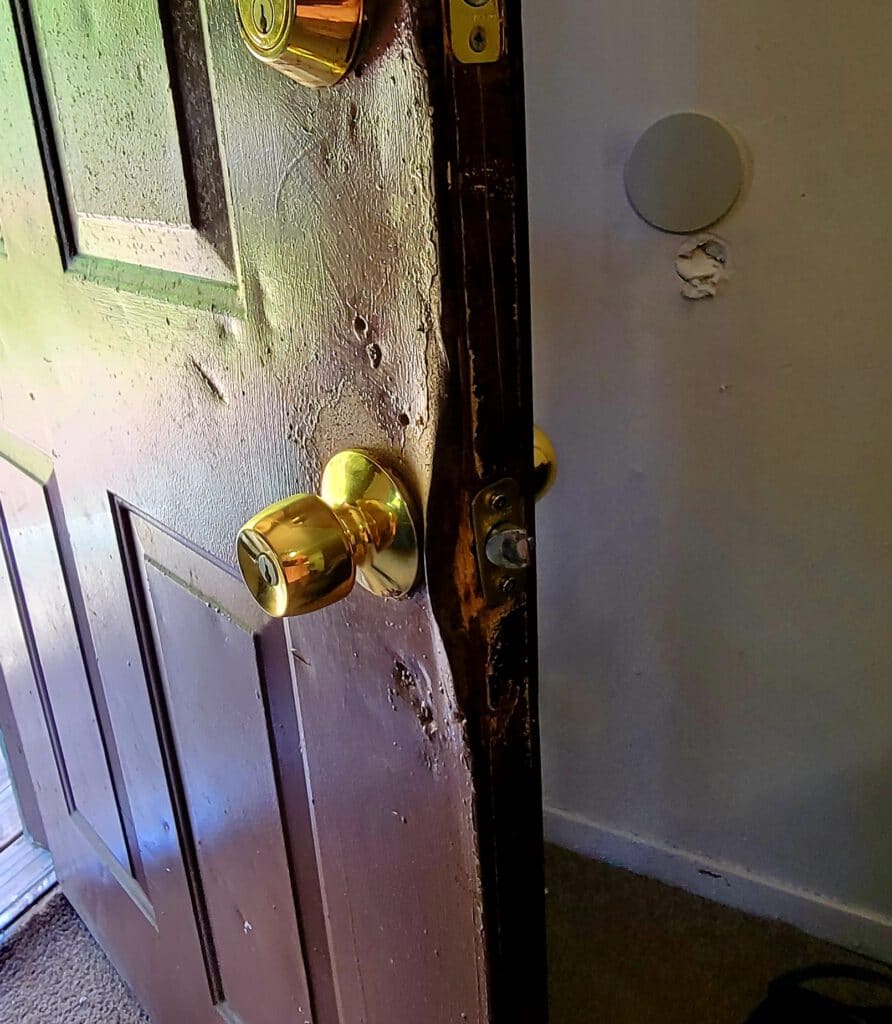 Resident Lashae Truitt claims she complained about the condition of her front door when she moved in but it still has not been repaired. The landlord, James D. Giles, said this is the first he had heard of it. Truitt then showed the Vicksburg Daily News and Kyle Washington with the City of Vicksburg her back bedroom and the water damage she claims was done by an air conditioning unit. Truitt states she removed the unit from the window in an effort to stop the water damage. A water stain covered most of the bedroom floor.

When asked about the water damage Giles responded, “Sounds like they took…they took that air conditioner out. You know, so, where is the air conditioner and why they never said anything?” 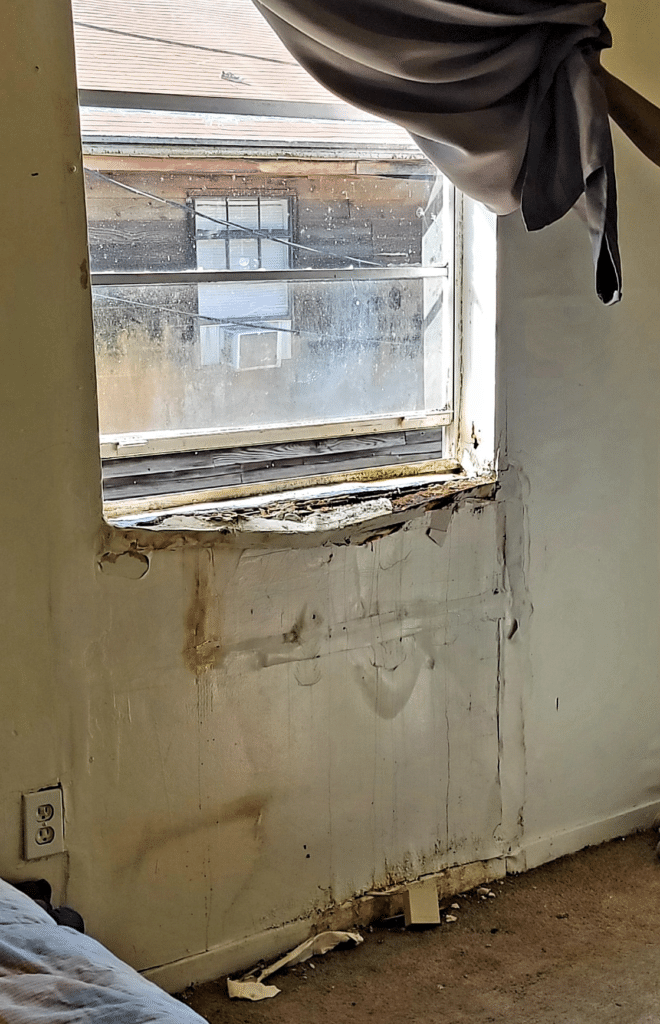 Water damage in a residents bedroom. (Photo by David Day)

Resident Jessica Berry walked the Vicksburg Daily News through her apartment pointing out a hole in the floor by the toilet. “I’m afraid it’s going to fall through one day. We’ve seen rats and snakes come through there. I’ve covered it up with a towel but it needs to be fixed.” 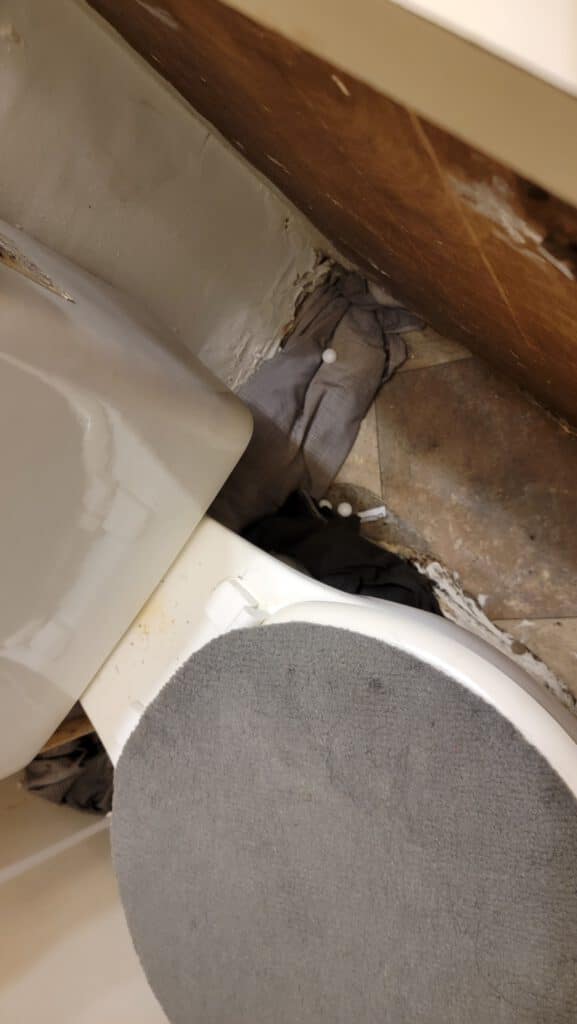 A hole in the floor behind the toilet is being covered by cloth. Photo by David Day

Landlord Giles, when asked about the hole and his plans to repair it, said, “This is the first I’ve heard of it.”

Laurel McDaniel has also been at Cyprus Hill for only a couple of months and told a similar story of moving in while she had few options. “There was a fire above the stove before I moved in. He was supposed to fix that but never did. I can’t use my stove and have to cook on this,” pointing out a hot plate on the counter. “The stove is missing the burners and throws the breaker. He promised he would fix that when I moved in but it’s still not fixed.” 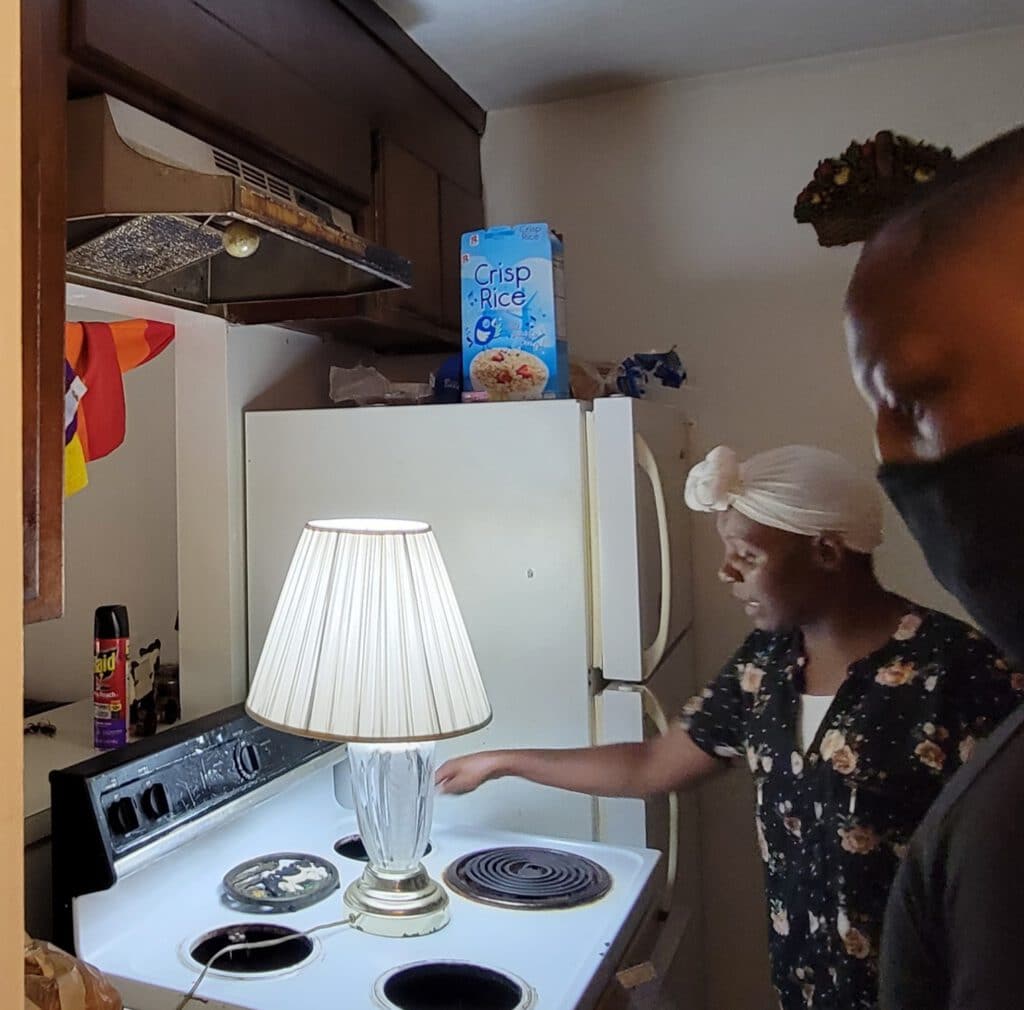 McDaniel shows the stove that is missing the burners and the burned-out fan above it as Kyle Washington looks on. Photo by David Day

When asked about the missing burners for the stove, landlord Giles said, “She took them out. I had the electrician come down and look at her stove and he worked on it. He said it was a breaker issue, she removed the eyes (burners).”

The breaker for the stove is tripped. Photo by David Day.

McDaniel said “I had to fix some of this myself. When I told him I fixed it and wanted to take it off the rent he told me it don’t work like that.” When asked by the Vicksburg Daily News if she had receipts for her repairs or for paying her rent, she said Giles doesn’t give receipts.

The Vicksburg Daily News questioned Giles about that and he produced a white folder he claimed had the receipts but failed to show any. “I just gave her a receipt a while ago,” stated Giles. When asked if he had a copy he responded, “I don’t have a copy, I just gave her a receipt.” When told by the Vicksburg Daily News that the tenant said the exact opposite of that, Giles responded, “That’s not true.”

“I have a good relationship with my tenants. I don’t understand where the problem was.”

The Vicksburg Daily News asked Giles about the door damage on Truitt’s door and another door, Giles said, “They never reported that.”

City Inspector Kyle Washington inspected the apartments with the three tenants. He had a list of items he covered with landlord Giles. “He will have a period of time to fix these things. If he doesn’t the city will fine him,” said Washington.

Giles repeated claims that the residents didn’t report the issues or that they created the issues was followed up by him claiming that some of the residents are retaliating for being evicted. “They got an eviction. That is what this is all about. When tenants get an eviction everything is broke.” 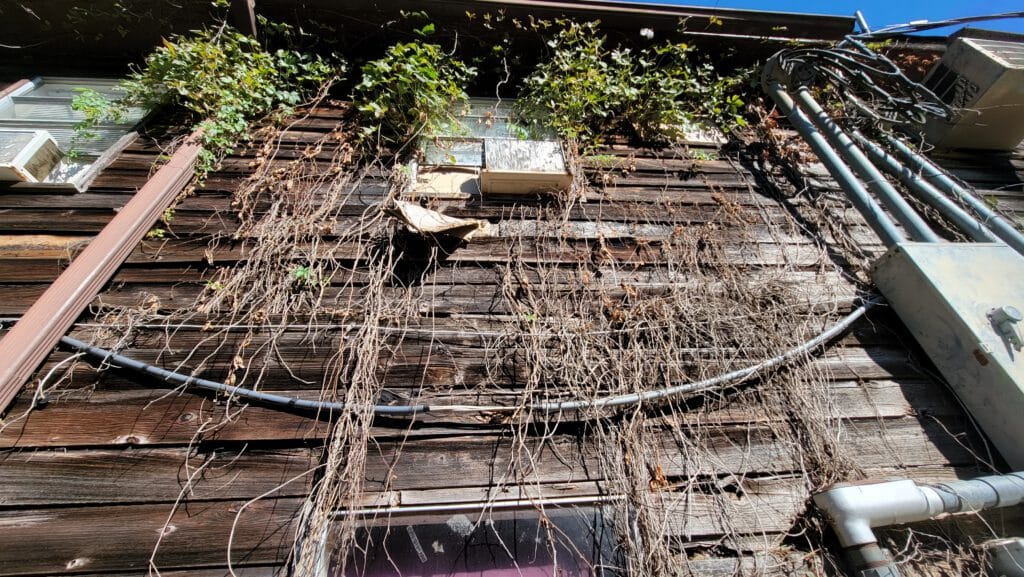 The back of the apartment building. Photo by David Day 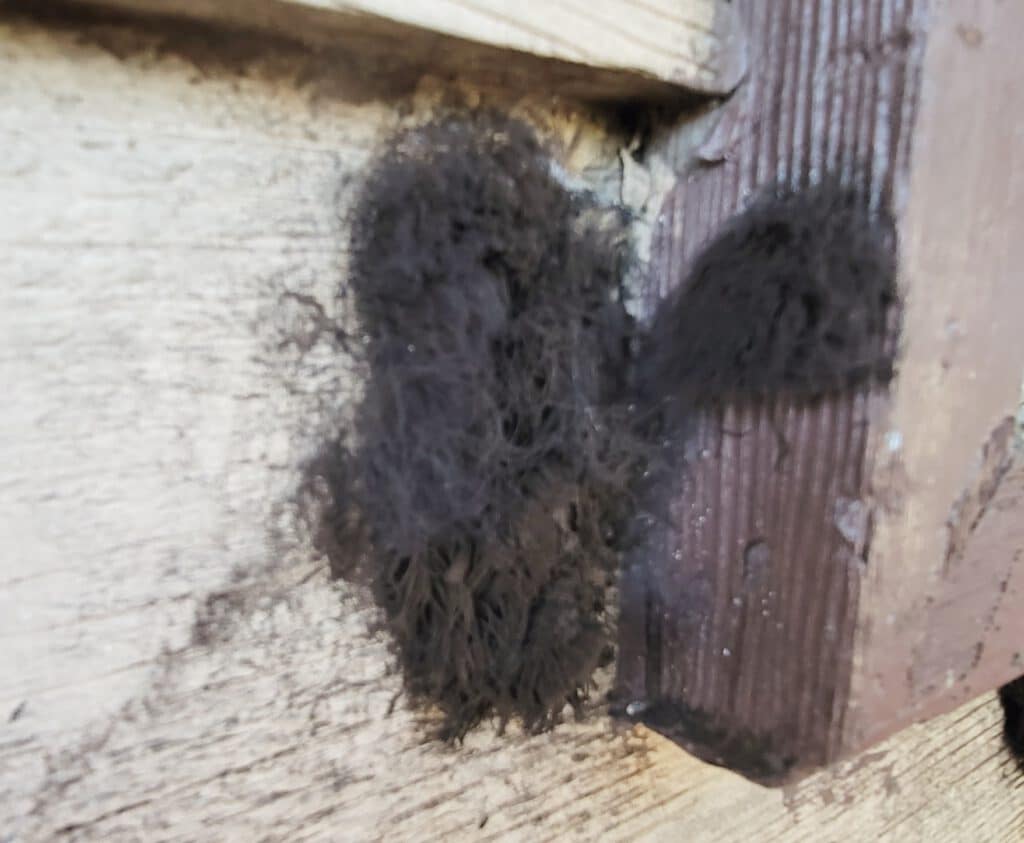 This was noticed near the front window air conditioner of two apartments. Photo by David Day 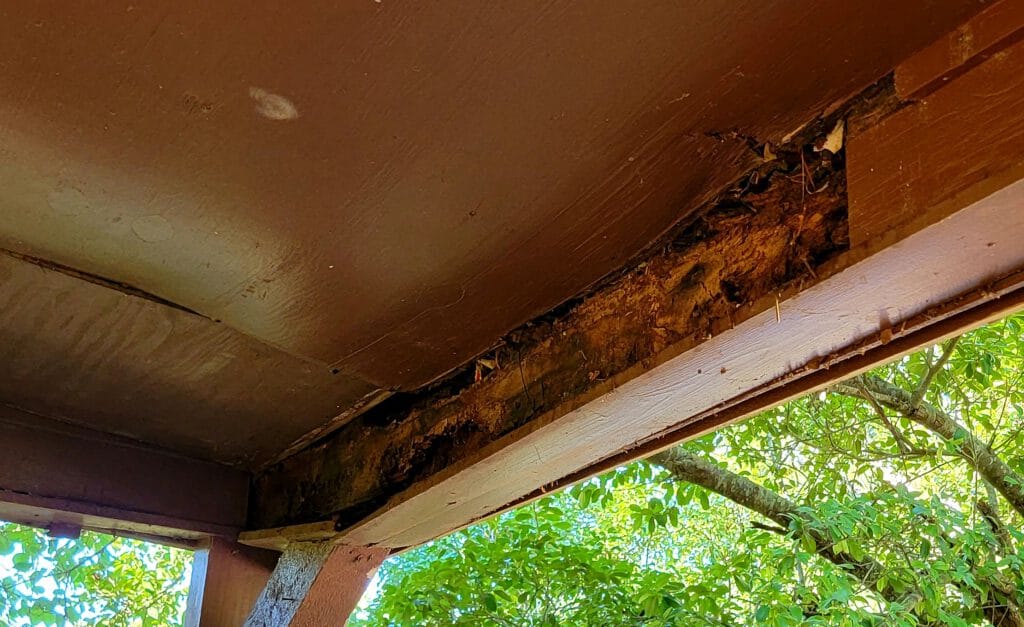 Damage to the porch at Cypress Hills Apartments. Photo by David Day 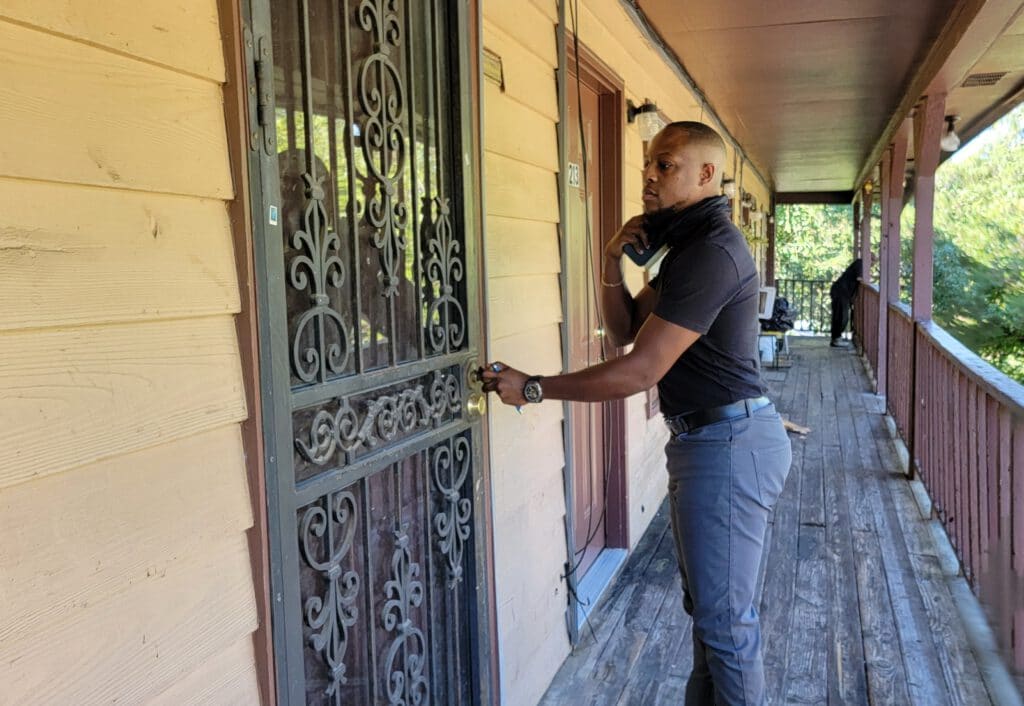 City Inspector Kyle Washington is about to enter the office at Apartment #212, 402 Locust Street. It is the only apartment with that type of outer door. Photo by David Day.