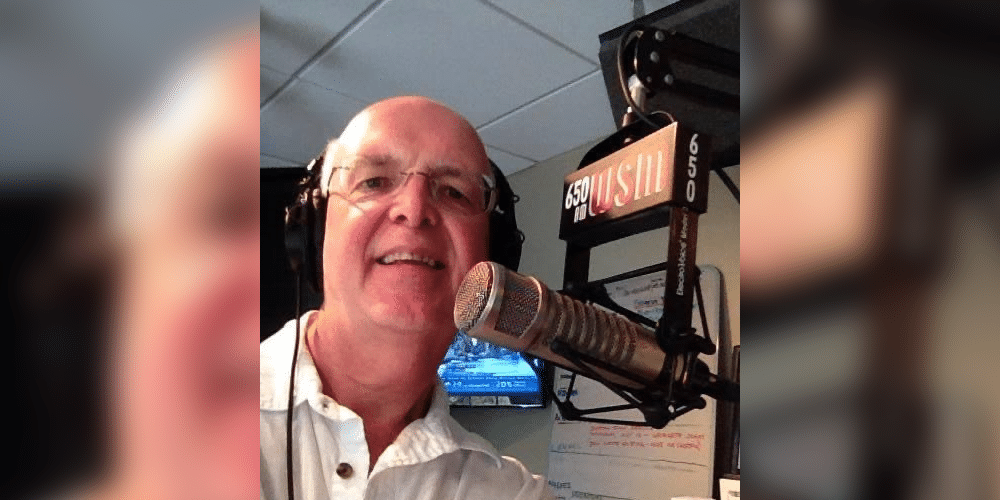 Photo of Dick Taylor working an air shift at the legendary WSM-Nashville. (Photo used with permission)

Dick Taylor is a recognized authority on all things media related. Mr. Taylor has taught various facets of the industry at numerous universities. Additionally, he has been highly successful in various management roles in the radio industry.

He currently resides in Winchester, Virginia. He has graciously given us permission to republish Sunday’s edition of his blog.

Please visit his blog for more of his unique insight on media and how it impacts our daily lives.

It was just a year ago that I wrote about “The Day the World Shutdown.” So, shall I ask you, “how are you doing?”

For Sue & I, while we were just vaccinated on Friday, the wearing of face masks, hand sanitizing and social distancing is unlikely to change for us for the rest of 2021, if not longer.

Based on my research of pandemics past, I realized very early that this would be about a two year disruption and I suspect that when we say “Happy New Year” and ring in 2022, things will finally be on course for whatever the “new normal” is.

A year ago I wrote that I expected most people would consume their media by streaming it via the internet. The latest research has shown that is exactly what happened. eMarketer data showed that traditional radio broadcasts were eclipsed by digital audio, mid-2020. This week, Edison Research reported, that 30% of all audio listening now occurs on mobile devices; unless you’re between the ages of 13-34, then that number is 46%. Not surprisingly, this age group’s listening to audio on an AM/FM radio receiver is down to only 20%.

Working from home meant that those people who normally listened to AM/FM radio while commuting in their car, were now doing their audio consumption where they live, and 32% of today’s households don’t have a single AM/FM radio in them. However, 44.2% of homes today have a voice activated assistant, like Amazon’s Alexa, to access their favorite audio content.

The global pandemic has forced all of us to get used to new ways of doing every little thing, such as shopping online, streaming video entertainment on huge flat screen TVs and asking Alexa for assistance like she had become a member of the family. We’ve become so comfortable with these new Artificial Intelligence (AI) devices that we might start to wonder what life was like before them.

Automobile manufacturers also took notice of this change, like the commercial for a new Buick – or is it an “Alexa on Wheels?”

I remember when I used to tell advertisers that a car was a “radio on wheels.”

Now I don’t have a new car, but my 2009 Honda Accord has a fabulous sound system that seamlessly connects to my iPhone and streams my audio content in my car. My car radio is locked on “AUX.” (I know I’m not alone.)

The End of Commuting

Bill Gates shocked the world when he predicted in November of last year that 50% of all business travel would never come back and that 30% of the days people spent in an office would likewise disappear forever. McKinsey Global Institute pretty much corroborated Gate’s predictions by adding that 20% of workers would continue to work from home indefinitely.

Disney plans to close 20% of its Disney Stores saying that they’ve seen changes in the ways people shop due to COVID-19 and that the future means people will continue to shop online. As a result, Disney plans to focus on e-commerce, its Apps and social media platforms. Disney says the data shows that the global pandemic increased the speed of change from brick-and-mortar to online shopping by half a decade.

Disney’s CEO Bob Chapek went even further in announcing the company’s future, saying that the days of releasing new movies to theaters for several months before bringing them to their streaming platform, are over. For example, when “Raya and the Last Dragon” hits the theaters this month, it will simultaneously be available on Disney+ for subscribers for an additional $30.

Disney+ has exceeded everyone’s expectations, rapidly growing to over 95 million paying subscribers. The biggest surprise to this streamer of family content was that over 50% of those subscribers don’t have children.

2020 was a record year for cord-cutting according to analysis of cable TV subscribers by MoffettNathanson. Cable TV lost six million subscribers dropping cable’s household penetration level to a low, not seen in thirty years. Smart TVs are the primary reason people now stream their video content from the internet.

Audiences for the Academy Awards, Grammy’s, Golden Globes and Primetime Emmys have all been in a steady decline since 2000. The first of these 2021 award shows, and a harbinger for those to come, the Golden Globes, set a record low for NBC’s telecast of these awards.

Where Have All the Sports Fan Gone?

You might have thought with people stuck at home, that sports would have seen solid television audiences, but that wasn’t the case. 2020 saw a drop in viewership for practically every sport. Compared with 2019, the NBA Finals were down 51%, the NHL Finals were down 61%, the U.S. Open tennis matches were down 45%. Even the Kentucky Derby recorded its lowest TV audience ever, falling 49% from 2019, to just over eight million viewers.

Television’s biggest audience draw for many years has been the NFL and the Super Bowl, but not this year. The big game’s audience was the lowest it has been in fifteen years.

Pro Sports, Harley Davidson and broadcast radio/TV are all suffering from a similar problem, they aren’t attracting the next generation. Generation Z Americans, those born after 1996, just aren’t that into sports, Harley’s and traditional media, like previous generations.

That’s probably why, when the NFL started asking for a 100% increase in TV rights payments, Disney (owner of ESPN) immediately rejected it.

However, streamers, like Amazon Prime and AppleTV+ may give the NFL the money they want, but will those high rights fees manifest in higher premiums for subscribers.

For the maker of “The Hog” and traditional broadcast media, the future is as challenging. Harley Davidson is looking to make their motorcycle line all electric, following the lead of the world’s automobile industry, and hoping it will attract new riders to their brand. Radio/TV broadcasters are also trying to capture new audiences with Apps, streaming and podcasts.

“I skate to where the puck is going to be, not where it has been.”

Anyone who thinks their business will return to the way it was, once COVID-19 is in the rearview mirror, will be hanging the “Gone Fishing” sign out, be down-for-the-count or just plain out-of-business.

It’s time for all of us to be thinking like Gretzky.