Decreases in COVID-19 hospitalizations and the seven-day average for new cases in Mississippi continue to show two areas that hold a glimmer of hope that the worst of the surge may be beginning to wane.

This optimistic news is tempered by the fact that this number is still about 100 patients higher than the peak last summer, and that numbers of seriously ill patients and those on ventilators are about as high as they have ever been in the state. Hospitals across the state — including Merit Health River Region in Vicksburg — are reporting that no ICU beds are available for any seriously ill or injured person, not just COVID-19 patients.

The expected surge of new cases and hospitalizations after the year-end holidays may still hit within the next week or so. In addition, Mississippi has already seen two record one-day highs in COVID-19 deaths this month: 98 reported Jan. 12 and 91 reported Jan. 5.

Sunday and Monday, Warren County reported 89 new COVID-19 cases and one new death. Cumulative totals in the county are 3,534 cases and 98 deaths.

Based on the first 18 days of January, Warren County could see between 1,300 and 1,400 cases by the end of the month, eclipsing all monthly case totals so far.

Warren County’s 14-day total of new cases is 643 with a daily average of about 46 cases daily. The seven-day average is about 40 cases a day, with 282 cases reported in the past seven days. The county is on the governor’s list of COVID-19 hot spots that include all but four of Mississippi’s 82 counties — Claiborne, Issaquena, Sharkey and Tunica — three of which neighbor Warren.

The U.S. continues to lead the world in numbers of cases and deaths by a wide margin.

Nationally, the cumulative cases in the U.S. have soared to more than 23.9 million, with some sources putting the figure as high as 24.4 million. Numbers of new infections, hospitalizations and deaths continue to rise.

The number of people who have died in the U.S. since the beginning of the crisis is about 397,612.

Since September, the average numbers of cases have risen steadily from about 35,000 new cases a day to nearly 220,000 per day. The U.S. is also averaging more than 3,300 deaths per day. Tuesday, the nation set a new one-day record of COVID-19 deaths when 4,406 people died in a single day.

The five worst-hit states are scattered around the country: Arizona, California, Oklahoma, Rhode Island and South Carolina are averaging the highest rate of new cases per 100,000 people. The states with the highest number of new cases reported in the last seven days include California, Texas, New York, Florida and Georgia.

The first is a drive-thru site at Pemberton Mall, run jointly by the Mississippi State Department of Health and the University of Mississippi Medical Center in Jackson. City and county officials are hopeful that the site will be up and running the week of Feb. 1, but the opening will be dependent on having sufficient supplies of COVID-19 vaccines.

Mission Primary Care and Medical Associates of Vicksburg have applied to administer the vaccine when supplies are made available.

Drive-thru sites are operated on the same model as testing sites: Residents must make an appointment either online or by phone. Currently, those 65 year of age and older, those with certain underlying conditions making them more vulnerable to the virus, health care providers and first responders are eligible to get vaccinated.

With the expansion of eligibility for the vaccine announced last week, MSDH ran through its allotment within 24 hours. Friday, MSDH announced that additional doses of vaccines have been allotted to Mississippi. The agency expects to be able to offer new vaccination appointments again beginning the week of Jan. 25. MSDH has assured residents that if they are scheduled to receive the second, required dose of vaccine, those appointments can still be scheduled now, indicating second shots have been set aside for those who need them.

A total of 109,354 Mississippians were inoculated against COVID-19 as of Jan. 16, including 9,588 who have received both required doses.

The federal government said Friday it has delivered some 31.2 doses of vaccine to states, territories and federal agencies since the vaccines became available.

About 10.6 million Americans have received the first dose of one of two COVID-19 vaccines, woefully short of the national goal of 20 million inoculated by the end of 2020. At least 1.6 million individuals have received both of the doses required for full inoculation. Additional information about the vaccines can be found on the Centers for Disease Control and Prevention website.

In Warren County, MSDH reported 39 new COVID-19 cases Sunday and 50 new cases Monday. The county saw one new death Sunday and no new deaths Monday. The cumulative number of cases in Warren County to date is 3,534, and the county’s death toll is 98. The seven-day average of new cases in the county is about 40 per day, about 29.8% higher than the average of cases a month ago.

Statewide, MSDH reported 1,606 new COVID-19 cases Sunday and 1,457 Monday, bringing the total cumulative confirmed cases in Mississippi to 253,932. The seven-day average of new cases is 1,946 per day, about 10% lower than the seven-day average a month ago. In January, the age group reporting the most cases in Mississippi are from 25 to 39 years old followed by those 50 to 64 years old.

Of the 70 deaths MSDH reported Sunday, 10 occurred between Jan. 1 and Jan. 16 in the following counties:

The three deaths reported Monday occurred between Jan. 16 and Jan. 17 in the following counties:

New cases and deaths were reported to MSDH as of 6 p.m. Saturday, Jan. 16, and Sunday, Jan. 17. MSDH usually reports statistics on the COVID-19 coronavirus each day based on the previous day’s and death reports.

The primary metric concerning state health officials are the numbers of people hospitalized, and that number has risen steadily since Nov. 4, 2020. Since Jan. 4, hospitalizations have remained flat and have even seen a slight decline. Regardless, COVID-19 hospitalizations threaten the state’s health care system as never before.

The number of Mississippians hospitalized for the virus as of 6 p.m. Friday, Jan. 15, was 1,337. The number includes 1,269 with confirmed cases of COVID-19 and 67 people with suspected but unconfirmed cases. Of those with confirmed infections, 333 were critically ill and in intensive care units and 207 were on ventilators. 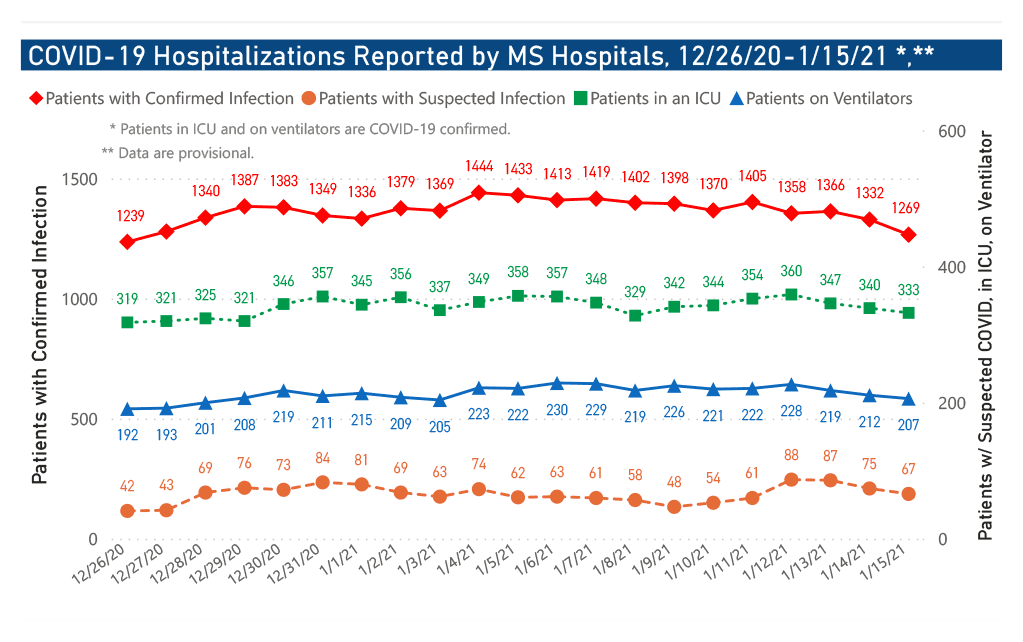 MSDH has estimated the number of people who can be presumed recovered from COVID-19 in Mississippi. That number is 198,888 through Sunday, Jan. 10. It represents about 78.3% of the cumulative 253,932 cases reported as of Monday, Jan. 18.

The number of cumulative cases in Warren County three weeks ago, Monday, Dec. 28, was 2,566, therefore the estimated number of people presumed recovered in the county is 2,468, or about 69.8% of the 3,534 cumulative cases reported as of Monday, Jan. 18. The county has an estimated 968 active cases.

The total number of Mississippians tested for COVID-19 (PCR and antigen tests identifying current infections) as of Saturday, Jan. 16, is 1,987,621 or about 66.8% of the state’s 2.976 million residents. MSDH reports statewide test results about once a week. Without daily updated numbers of tests, it is impossible to accurately calculate Mississippi’s positivity rate (which shows whether enough testing is being done, positive results to tests, seven-day average); however, the estimated rate was 25.4% Sunday, according to Johns Hopkins University. The national rate was 10.9%, and 5% or lower indicates adequate testing.