Based on the first 11 days of January, Warren County could see more than 1,400 cases by the end of the month, eclipsing monthly totals so far.

Warren County’s 14-day total of new cases is 686 with a daily average of 49 cases. The seven-day average is nearly 52 cases a day, with 361 cases reported in the past seven days. The county is on the governor’s list of COVID-19 hot spots that include all but four of Mississippi’s 82 counties — Claiborne, Issaquena, Sharkey and Tunica — three of which neighbor Warren.

The huge number of cases means a corresponding rise in the number of hospitalizations in the state. With hospitalizations for COVID-19 nearing 1,500, hospitals across the state — including Merit Health River Region in Vicksburg — are reporting that no ICU beds are available for any seriously ill or injured person, not just COVID-19 patients.

Nationally, the cumulative cases in the U.S. have soared to more than 22.4 million, with some sources putting the figure as high as 22.9 million. Numbers of new infections, hospitalizations and deaths continue to rise sharply.

The number of people who have died in the U.S. since the beginning of the crisis is about 374,428.

At least 1,777 people died of the virus Sunday in the U.S., and at least 208,338 new cases were reported. The numbers of new cases have increased about 38% in the last 14 days. The rate of deaths has also increased, by about 47% in the past two weeks, as has the rate of hospitalizations. About 129,229 people were in the hospital Sunday for COVID-19, an increase of 11% in the past two weeks.

The five worst-hit states are scattered around the country: Arizona, California, Oklahoma, Rhode Island and South Carolina are averaging the most daily new cases per person. Arizona is reporting more cases per capita than any other state at the moment. California continues to see extraordinary numbers of new cases, particularly the southern part of the state where emergency room have had to shut their doors for hours at a time. Nearly one in 10 people in Los Angles have tested positive.

In the U.S., at least eight states — Colorado, California, Florida, New York, Georgia, Pennsylvania, Texas and Connecticut — have confirmed a total of 63 cases of the COVID-19 variant first reported Dec. 8 in the U.K. It’s likely the variant has spread to other states as well. The variant is more contagious by about half but does not appear to be more severe or deadly. Regardless, because of its higher contagion rate, the country will see even higher rates of cases and deaths in the coming weeks and months.

The Centers for Disease Control and Prevention are denying reports of a new variant originating in the U.S. The reports are based on speculation from the White House Coronavirus Task Force and Dr. Deborah Birx.

“To date, neither researchers nor analysts at C.D.C. have seen the emergence of a particular variant in the United States,” said Jason McDonald, a spokesman for the CDC, in a statement.

Statewide, MSDH reported 2,214 new COVID-19 cases Sunday and 1,227 Monday, bringing the total cumulative confirmed cases in Mississippi to 240,309. The seven-day average of new cases is 2,376 per day, about 21% higher than the seven-day average a month ago. In January, the age group reporting the most cases in Mississippi are from 25 to 39 years old followed by those 50 to 64 years old.

Deaths are a lagging indicator. The current surge began in Mississippi in late October, and the state saw record deaths in December and again in January; 85 cases were reported Dec. 29 and 91 cases Jan. 9. Nearly 1,000 deaths were reported in December.

Of the 22 deaths MSDH reported Sunday, nine occurred between Jan. 6 and Jan. 9 in the following counties:

An additional 13 COVID-19 related deaths occurred between Dec. 23 and Jan. 5 and were identified from death certificate reports.

An additional seven COVID-19 related deaths occurred between Dec. 25, 2020, and Jan. 3 and were identified from death certificate reports.

New cases and deaths were reported to MSDH as of 6 p.m. Saturday, Jan. 9, and Sunday, Jan. 10. MSDH usually reports statistics on the COVID-19 coronavirus each day based on the previous day’s and death reports.

The number of Mississippians hospitalized for the virus as of 6 p.m. Friday, Jan. 8, was 1,460. The number includes 1,402 with confirmed cases of COVID-19 and 58 people with suspected but unconfirmed cases. Of those with confirmed infections, 329 were critically ill and in intensive care units and 219 were on ventilators. 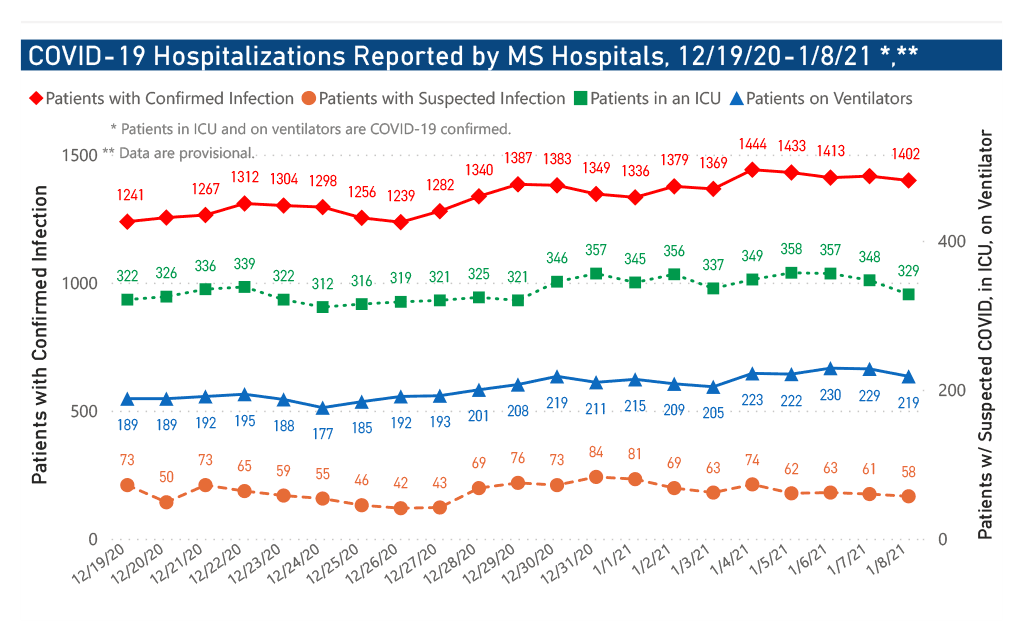 MSDH has estimated the number of people who can be presumed recovered from COVID-19 in Mississippi. That number is 182,103 through Sunday, Jan. 3. It represents about 75.8% of the cumulative 240,309 reported as of Monday, Jan. 11.

The number of cumulative cases in Warren County three weeks ago, Monday, Dec. 21, was 2,327, therefore the estimated number of people presumed recovered in the county is 2,237, or about 68.8% of the 3,252 cumulative cases reported as of Monday, Jan. 11. The county has an estimated 925 active cases.

The total number of Mississippians tested for COVID-19 (PCR and antigen tests identifying current infections) as of Saturday, Jan. 10, is 1,903,704 or about 64% of the state’s 2.976 million residents. MSDH reports statewide test results about once a week. Without daily updated numbers of tests, it is impossible to accurately calculate Mississippi’s positivity rate (positive results to tests, seven-day average); however, the estimated rate was 23.3% Sunday, according to Johns Hopkins University. The national rate was 13.2%, and 5% or lower indicates adequate testing.

Vicksburg wakes to a winter wonderland