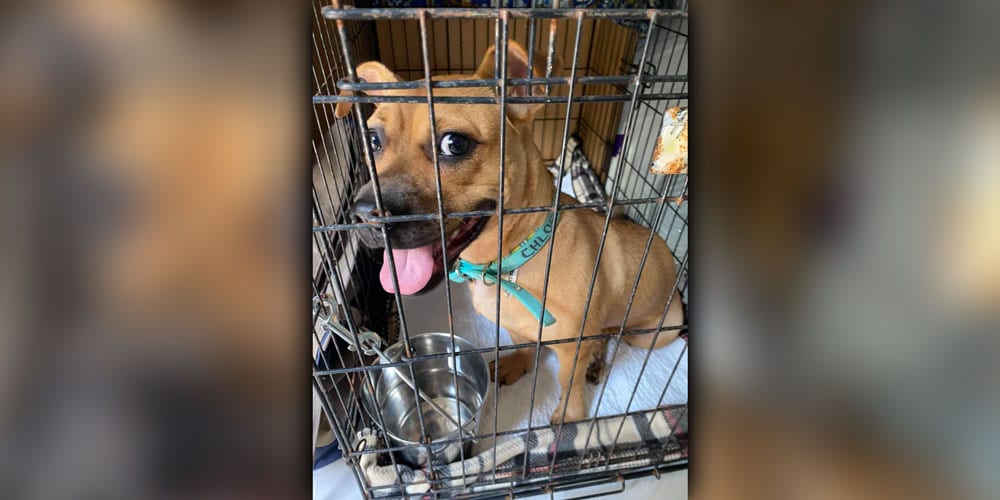 When Jeffery Fisher with Animal Control found Cloe, a little tan mixed-breed dog, she was in a small cage with severe wounds and was putting off a putrid smell. Her legs were rubbed raw and to the bone, her flesh rotting away, and she was missing toes.  Cloe was immediately taken to Vicksburg Animal Hospital and Carolyn Andrews, who was in possession of the dog, was charged with animal cruelty.

Andrews originally stated that Cloe was her son’s dog, and that Cloe had come to her when her son became incarcerated.  She would later change her story and claim the dog was a stray that she was trying to help.  Judge Marcie Southerland, unimpressed with the inconsistencies in Andrews’ testimony, sentenced Andrews to six months in jail, with three suspended, as well as a $1,000 fine on top of restitution for Cloe’s medical bills.  Andrews was also prohibited from owning another animal for three years, and as a consequence, lost custody of her other dog.

Dr. Stephanie Wallace was on duty at the Vicksburg Animal Hospital when Cloe arrived.  The festering wounds on her feet were so badly infected that the smell made the seasoned and experienced 14-year veterinarian gag. Wallace noted that Cloe was a candidate for euthanization, but she decided that since Cloe was somehow still able to walk, she’d receive treatment instead.

That was in April.  Three months later, Cloe’s horrific wounds have slowly healed. With surgeries, skin grafts and a lot of love, this brave little dog has come full circle and looking at her today, you’d never know how much she’s been through.

Caregivers say that Cloe is a good, sweet girl, but also that they had to “show her how to be a real dog and teach her doggie manners.”  Thankfully, the City of Vicksburg Animal Shelter partnered with CARE of DC to help Cloe find her happily ever after.

When life gets hard, think about brave Cloe, whose determination to walk, even as her feet were impossibly mangled, saved her from being put down, and whose willingness to trust people, even after being so terribly wronged, allowed her find healing and a chance at a new life.