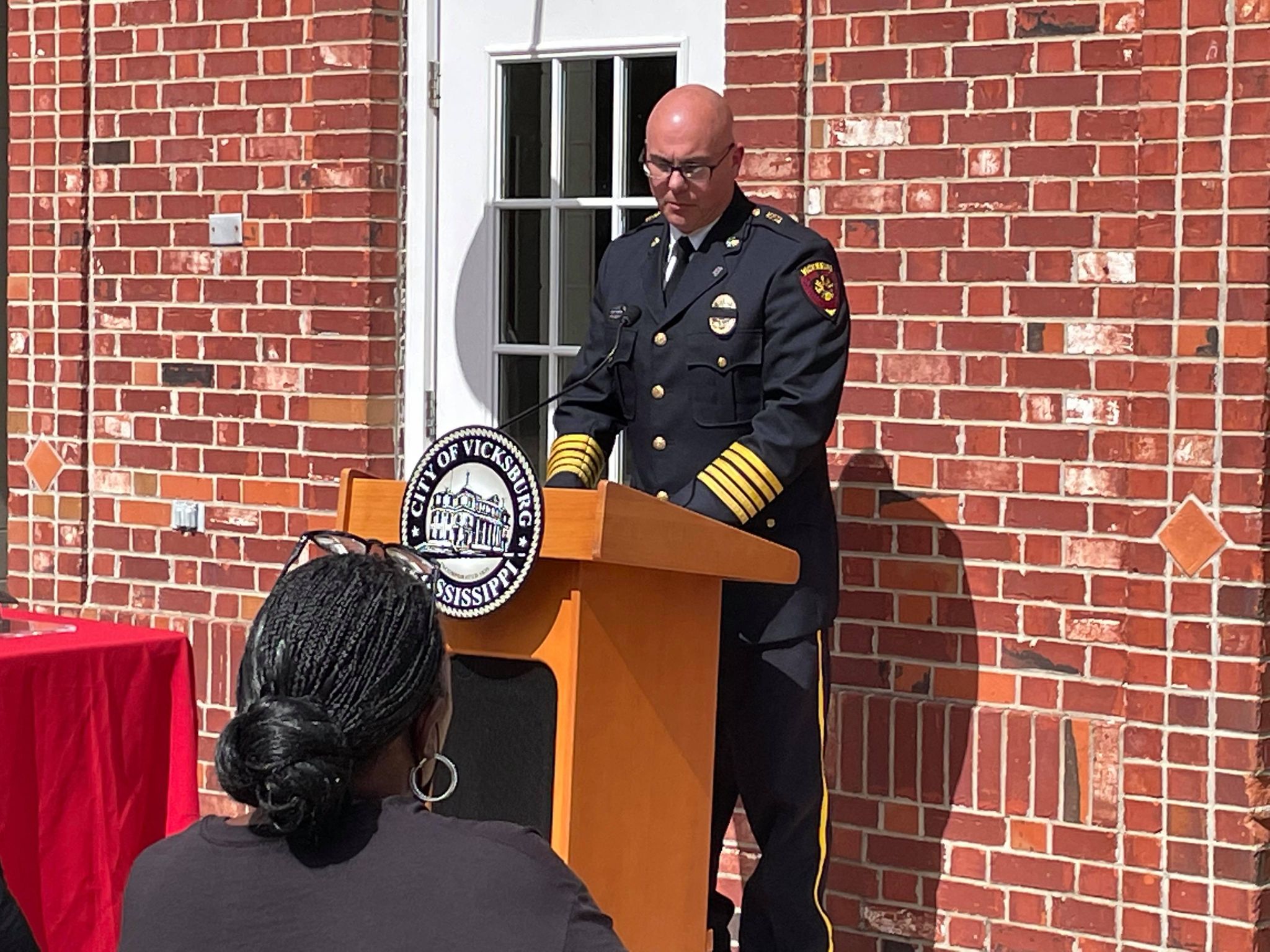 [Editor’s note: The original story contained an error where it was reported that all four Engine 1 crew died as a result of the explosion. Three of the crew died and the other remained hospitalized for months. The story has been updated with the corrections.]

Family, friends and fellow first responders gathered together on Friday to honor the firefighters who’s lives have been lost. The ceremony took place at noon on Friday at the Vicksburg Fire Department Memorial Station (Firestation #2). 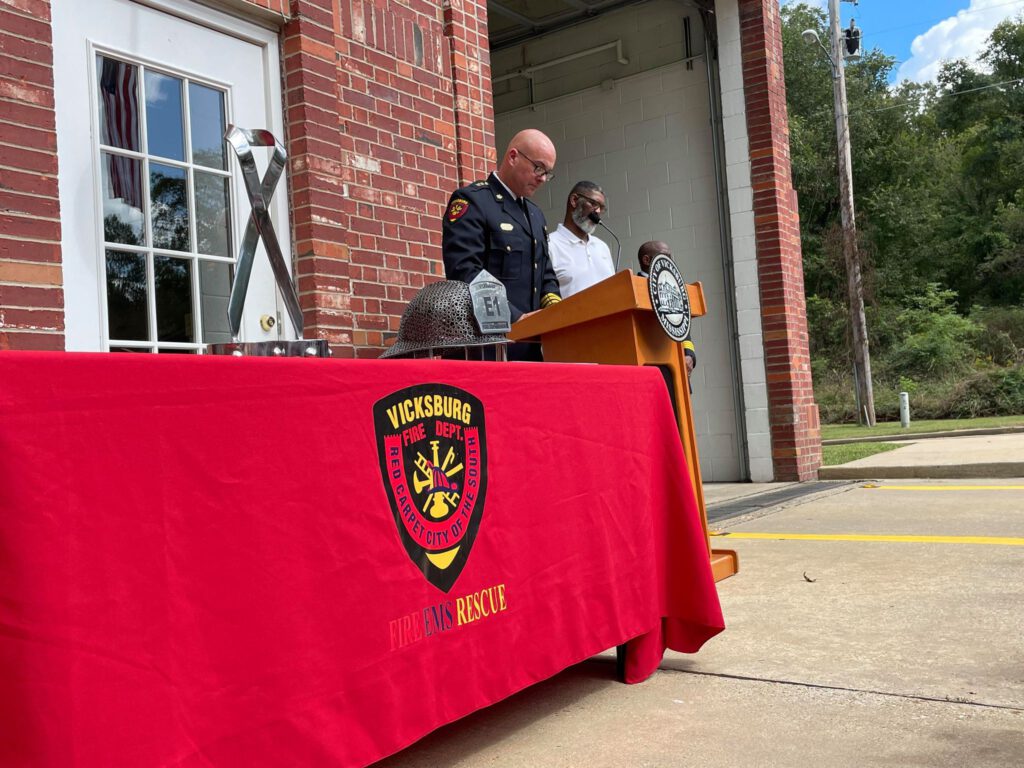 Vicksburg Fire Chief Craig Danczyk began with a history of the fire department and remembered those who sacrificed for their communities. (Photo by Marcus James)

Vicksburg fire Chief Craig Danczyk began the ceremony by announcing the establishment date of the Vicksburg Fire Department, April 13, 1837. He went on to state that for 184 years, the VFD has served the community. “As firefighters, we do not know when the next alarm will come, but rest assured, we will answer the call,” stated Danczyk.

Danczyk noted several instances throughout history where fellow firefighters answered the call and were either injured or lost their lives in service. 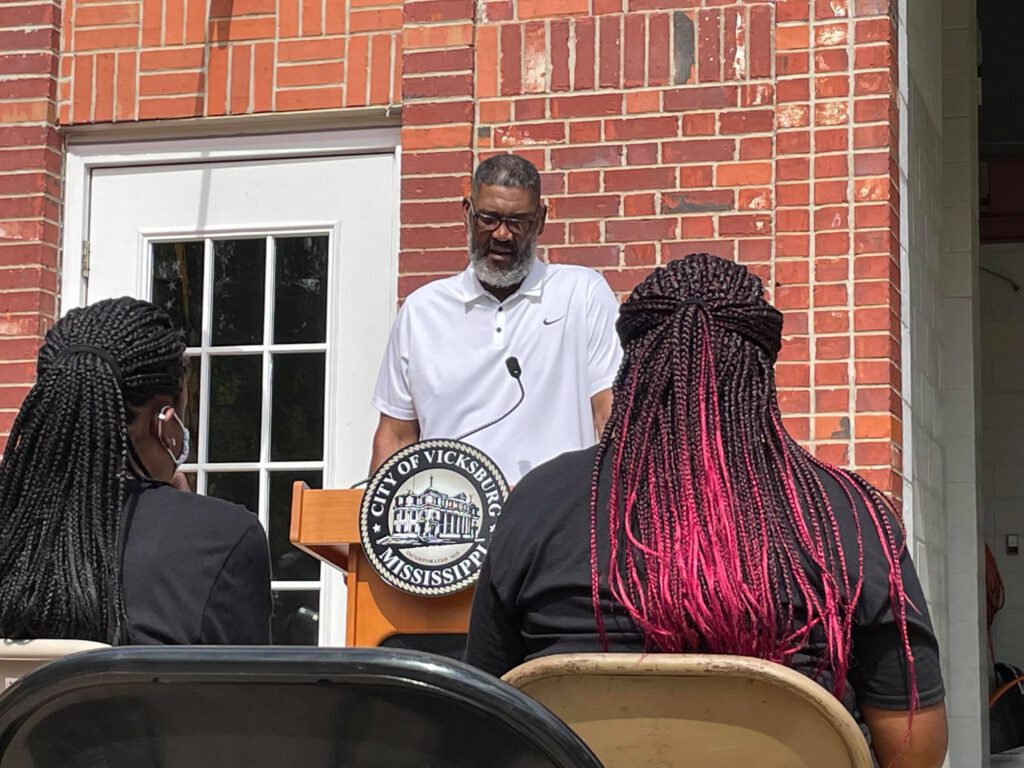 Johnny Rivers of Sports X of El Paso, Texas delivers remarks about the memorial tokens to be presented. (Photo by Marcus James)

A steel ribbon and fire helmet sat on display, serving to represent the struggles firefighters face and honor those who lost their lives in service to their communities.

“We were challenged to come up with something that wouldn’t infringe on what somebody else was doing,” said Johnny Rivers. “So, in thinking, you use your mind to say ‘what can I come up with that would really depict what people go through in that struggle?’ and steel came to mind.”

The fire helmet is comprised of around 2,900 various nuts which are welded together to create the piece. “It takes two welders seven days to build one of these helmets,” said Rivers.

Only two have been handed out in the past. Rivers stated, “The first one we presented was in El Paso, Texas to a fireman who lost his life due to an overdose of chemotherapy. The second one went to the Fire Department of New York. The third one is being presented here, to the Vicksburg Fire Department.” 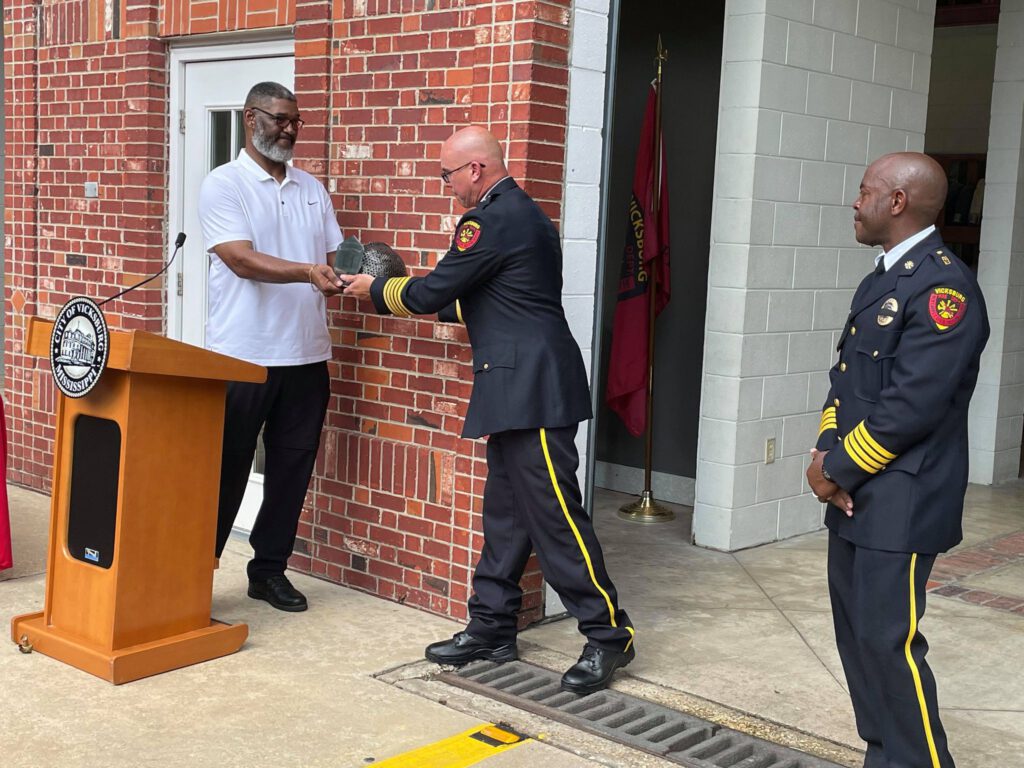 The metal ribbon was given to Jaenette Flaggs, widow of Assistant Chief Darrell Flaggs who dedicated his life to the Vicksburg Fire Department. Flaggs died June 4, 2020 after a battle with cancer.

“I am sure that Darrell would be pleased. He dedicated his life to the fire department. He took his job very seriously. So I’m sure he would be pleased and I just thank everybody for everything,” stated Jeanette Flaggs.

“What a lot of people don’t know is firefighters are 400% more likely to get certain types of cancer. That’s one of the danger’s we face,” stated Danczyk. “(Flaggs) served very honorably and we miss him.” 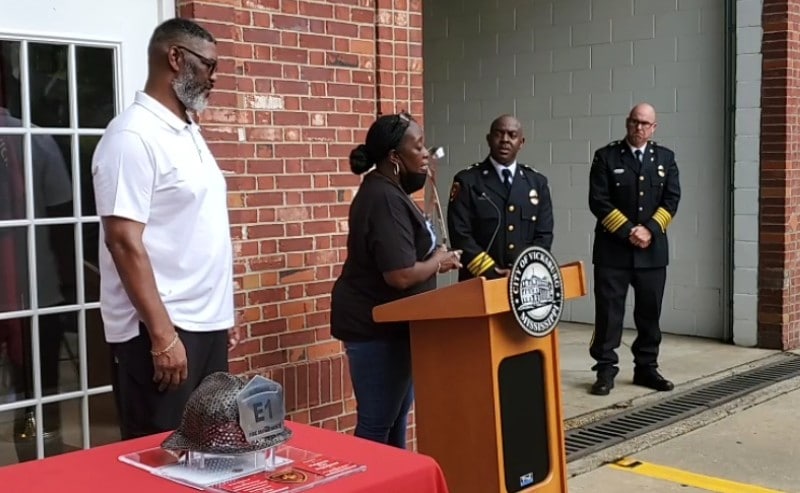 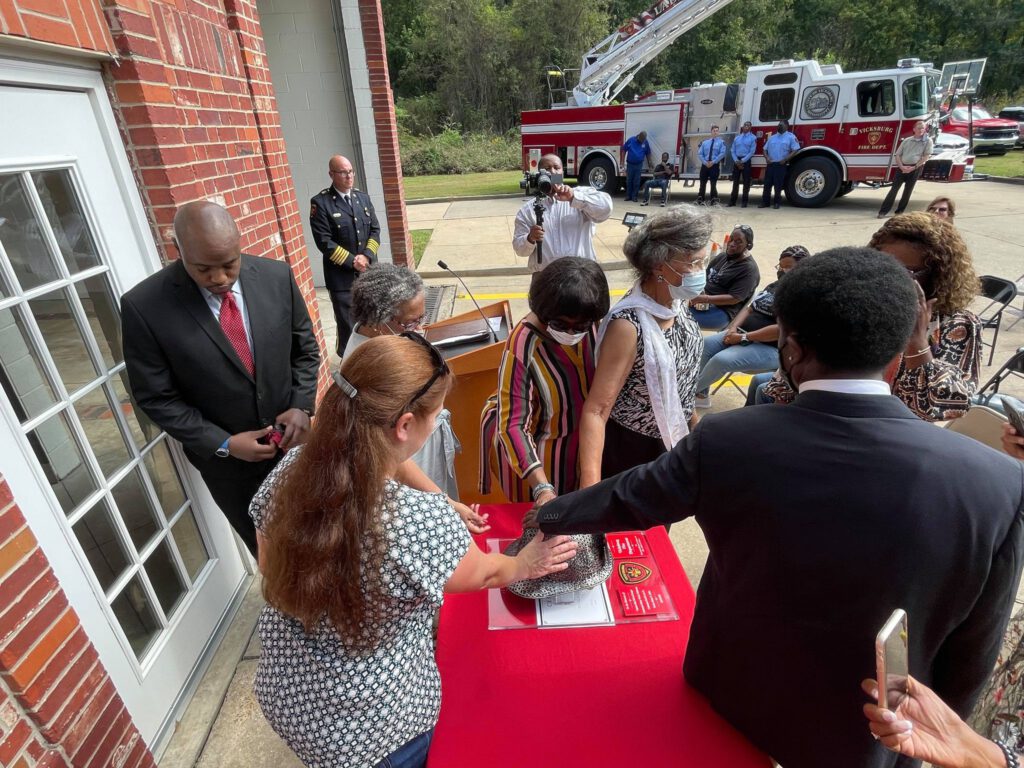 The family of the Engine 1 crew were invited to place their hands upon the memorial. (Photo by Marcus James)

Vicksburg Mayor George Flaggs, Jr., brother to the late Darrell Flaggs, closed out the ceremony by expressing his gratitude to first responders, their families and to thank those responsible for hosting the ceremony. 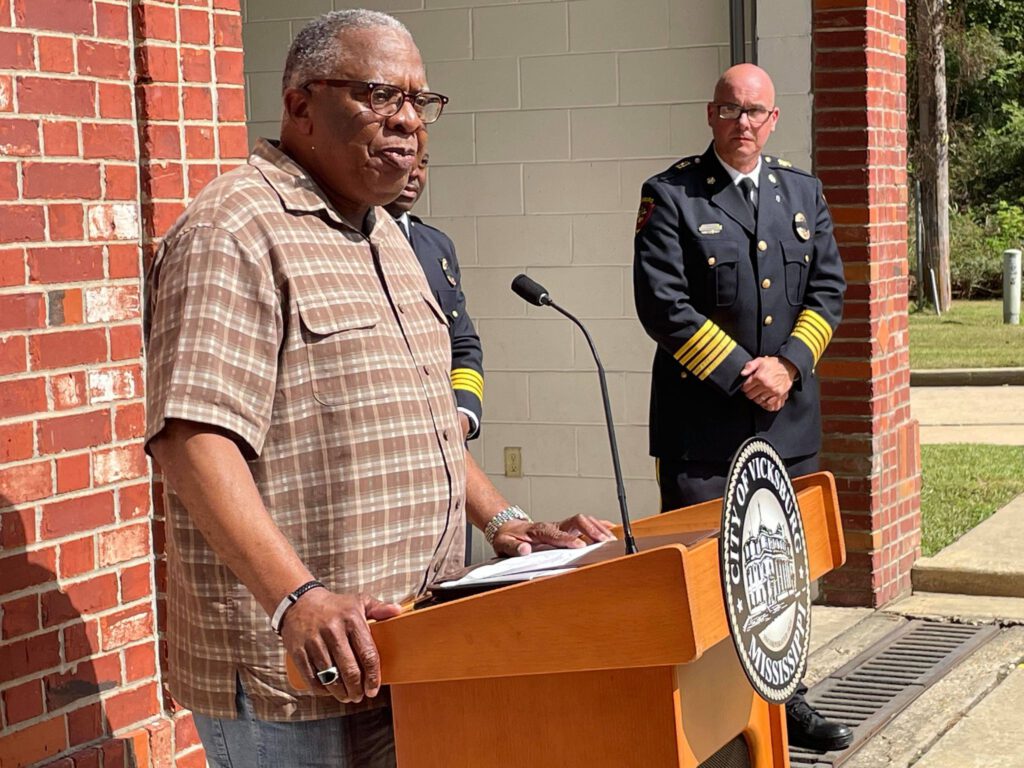 Mayor Flaggs thanked those responsible for the ceremony and expressed his gratitude to first responders who sacrifice in the name of service to the community. (Photo by Marcus James)

“What you have done today is not let us forget these families, because it was these families that stood back and made the sacrifice,” stated Flaggs. “Let us not forget this day. Let us go forward this Memorial Day and leave them with an understanding that in Vicksburg, if you are a fireman, we’ll never forget you and your service to us.”