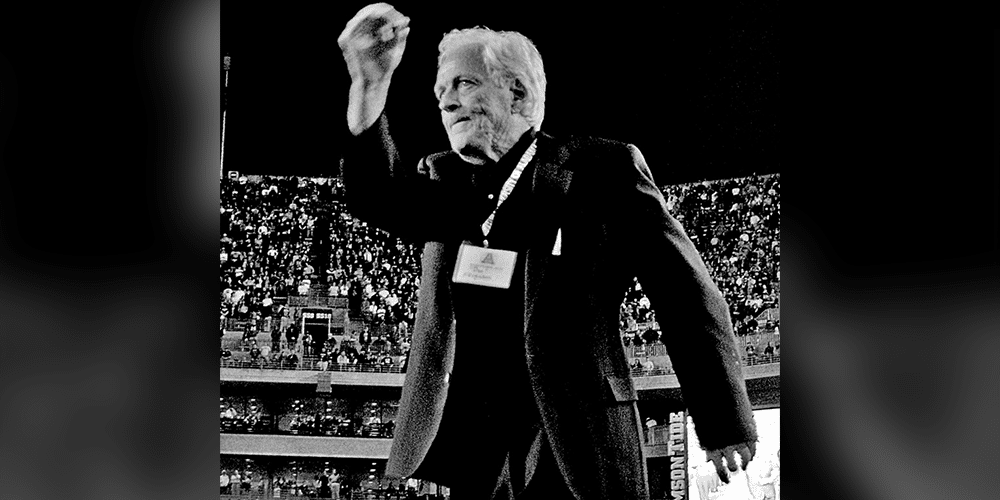 A Celebration of Life will be held for Dr. James S. “Doc” Ferguson on August 14, 2021 from 2 to 5 p.m. at Events Off 5th, located at 515 College St., Columbus, Mississippi. Please call 662-386-5634 for more information.  Everyone is welcome to attend and share their stories and favorite memories of Jim.

Dr. James S. ”Doc” Ferguson, former director of University of Alabama “Million Dollar Band” and the “Pride of the South Marching Band“ at the University of Mississippi passed away at the age of 85 on March 17, 2021. At the time of his death he resided in Woodstock, Georgia with his wife, Micki, his puppies, Gracie and Lucy and his beloved backyard full of cypress trees, catalpa trees, and blue birds. Jim was born November 24, 1935. He was preceded in death by his father, Verell Pennington Ferguson and his mother, Ruth Smith Ferguson in Columbus, Mississippi. He was also preceded in death by his brother, Verell Pennington “VP” Ferguson, Jr. and his sister Betty Ferguson Allen. His is survived by his wife Micki Ferguson, his son James Smith Ferguson, Jr and his wife, Victoria Fisher Ferguson and their two children, Jack Fisher Ferguson and Max Pennington Ferguson. Son Robert Alexander Ferguson. Stepchildren, Travis and Shana Childress and Robert and Sunshyne Pothier. His is also survived by two step grandchildren Lorelei Pothier and Carter James Pothier. There will be a celebration of his life later when it is safe to do so.

After retiring from band directing, Jim started Datron Software Services in Birmingham, Alabama. In 1992 he moved to New Orleans, Louisiana with Micki and their blended family and obtained his Master of Social Work degree. When the family moved to Atlanta, Georgia in 1996, Jim worked as an Oracle DBA and Data Analyst, before retiring once again in 2011 to enjoy nature and create musical projects. Jim remained an ardent student of all subjects for his lifetime. In the weeks preceding his death he had decided he was going to learn to play piano like Dr. John. He was doing very well on the piece, “Just a Closer Walk with Thee.”

In his childhood he played daily on the Toby Tubby and the Luxapalila Creeks near Columbus. He was a dedicated teacher, pilot, a sailor, and a wonderful father, friend and life companion. When he retired in 2011 he began in earnest his devotion to his beloved backyard bluebirds and his puppies. He often said he wanted to talk to the animals like Tarzan did. Gracie and Lucy listened devotedly to every word he said. I believe the bluebirds were listening in his backyard. Perhaps he’s flying over the rainbow with bluebirds right now, as he often said he wanted to do.