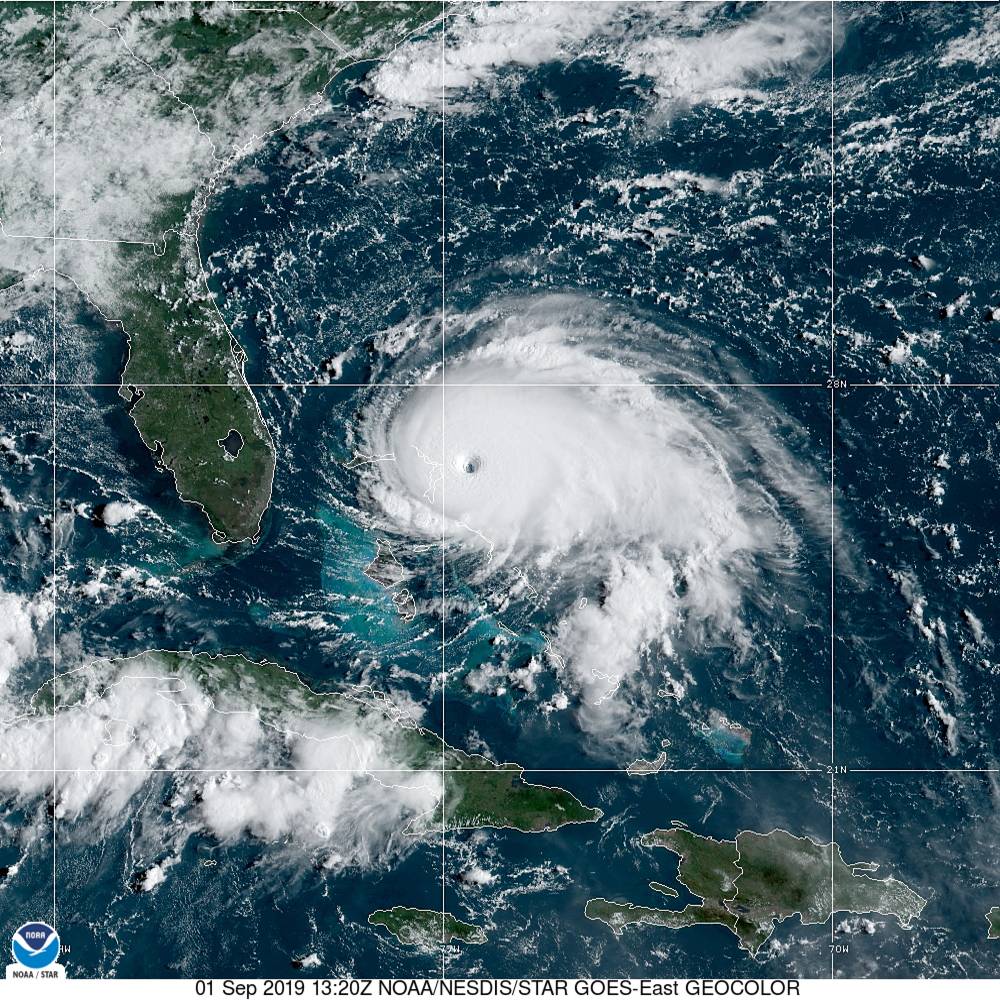 Hurricane Dorian, now a catastrophic Category 5 storm, is currently about 210 miles east of West Palm Beach, Fla., predicted to make landfall on the islands of the north Bahamas today. With maximum sustained winds of 175 miles per hour and gusts up to 200 mph, Dorian is a severe threat to life and will cause tremendous property damage where ever it meets land.

In the next several days, models show that it will impact Florida’s Atlantic Coast, then head north and east, scraping the southern Atlantic Coast of the United States, wreaking havoc and dumping rain on eastern Georgia, the Carolinas and into Virginia and the Chesapeake Bay. At this point, it’s still not certain exactly where it will make landfall in Florida, and how far inland Dorian will go before heading north. 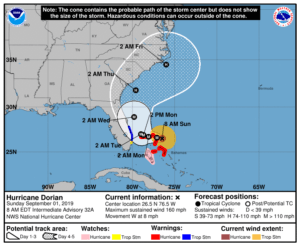 The following is information from the National Oceanic and Atmospheric Agency and the National Hurricane Center:

Data from an Air Force Reserve Hurricane Hunter aircraft indicate that Hurricane Dorian has continued to intensify, and now has maximum sustained winds near 175 mph (280 km/h), with a minimum central pressure of 922 mb (27.23 inches).

Dorian is currently reaching the Abaco Islands.  This is a life-threatening situation.

Hazards include wind gusts over 200 mph and storm surge 15 to 20 feet above normal tide levels with higher destructive waves. These hazards will cause extreme destruction in the affected areas and will continue for several hours. 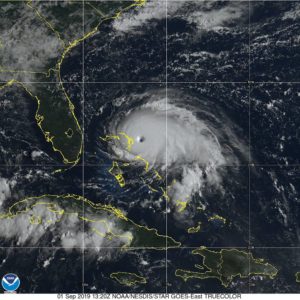 Dorian continues to exhibit a well-defined eye surrounded by very cold cloud tops on satellite images. Observations from an Air Force Hurricane Hunter aircraft from several hours ago indicated that the intensity was still near 130 kt, and since the cloud pattern remains very impressive, it is assumed that Dorian has at least maintained that strength through the present time. The hurricane will remain in a fairly low-shear environment for the next few days, however since it is forecast to move quite slowly over the shallow waters of the northwestern most Bahamas through Monday, this would likely result in less available oceanic heat content. Therefore, a very slow weakening is anticipated to commence after 12 hours or so. The official intensity forecast is near the high end of the numerical guidance suite.

The hurricane continues moving westward, or about 280/7 kt. A high-pressure ridge to the north of Dorian should maintain this westward movement through today. By tonight, the global models show the ridge weakening, and this evolution should result in a slowing of the forward speed, with the hurricane becoming nearly stationary around 48 hours. In comparison to its earlier runs, the new ECMWF track forecast takes the system farther to the west during the next couple of days and is the southwestern most model through 48 hours. As a result, the official track forecast has been shifted a little west during that time frame. In 2 to 4 days, Dorian should turn northward in response to a trough over the eastern United States. By the end of the period, the flow on the south side of the trough should cause the cyclone to move northeastward near the Carolinas.

The westward shift of the NHC track within the first 48 hours necessitates the change from a Tropical Storm Watch to a Tropical Storm Warning for a portion of the Florida east coast. Although the official track forecast does not show landfall, users should not focus on the exact track since a Florida landfall is still a distinct possibility.

Related Topics:FeaturedHurricane Dorian
Up Next

Mississippians work longer than most Americans to fill up their tanks