Can the President stop the flood? 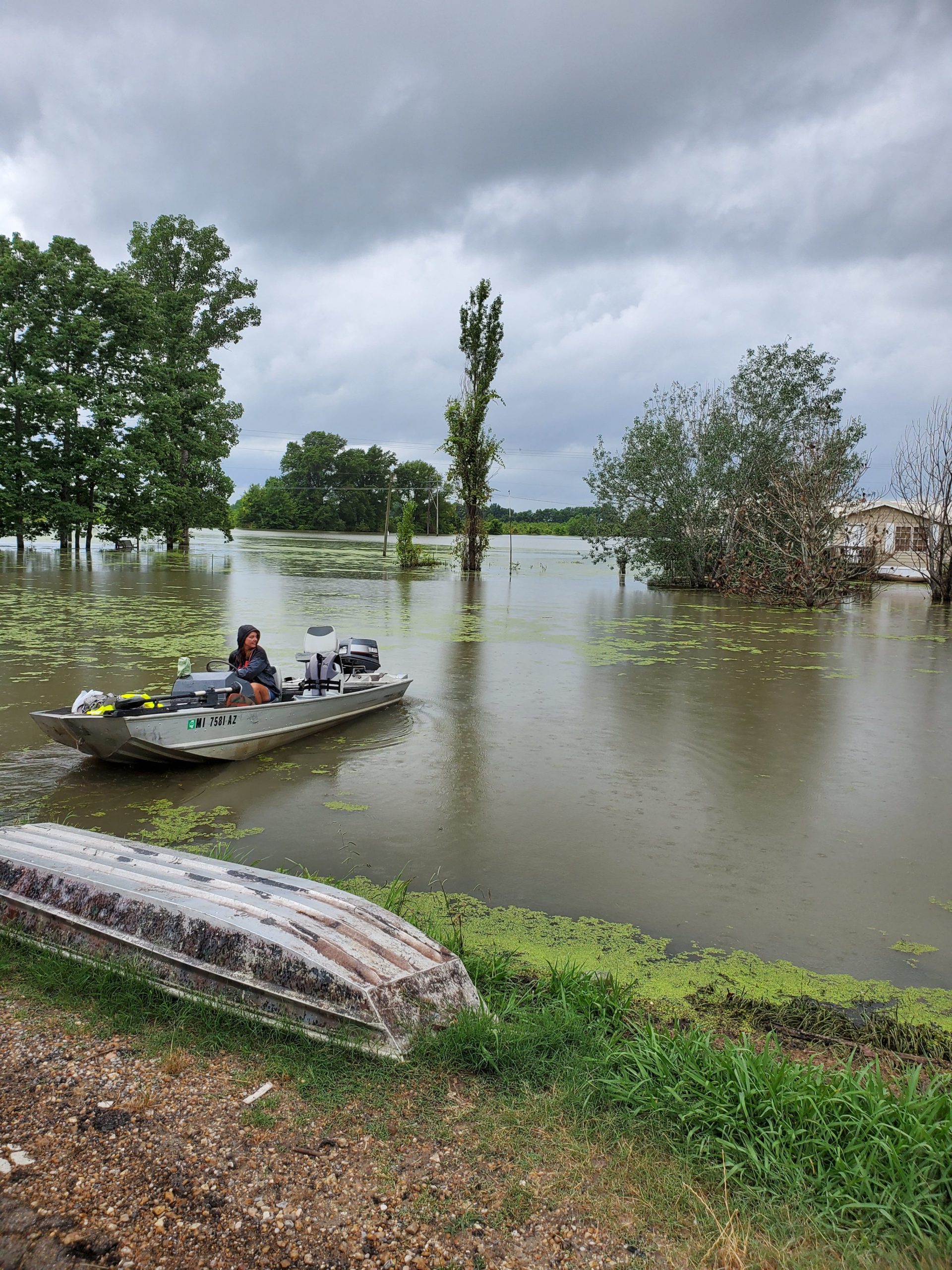 Redwood resident Stormy Deere needs a boat to get to her front door because of the South Delta flooding.

Among the many advocates of completing an 80-year-old plan to protect the South Delta in some flooding situations, count Senator Cyndi Hyde-Smith. Last week, the Mississippi Republican sent a letter to President Donald Trump asking for his support for both temporary and permanent help to alleviate the Great Backwater Flood, now nearing 120 consecutive days.

Floodwater has swamped 860 square miles, an area larger than the cities of New York and Los Angeles combined, the Associated Press reports.

“There is an immediate need to remove the trapped floodwaters, which can only be accomplished by pumping it from the protected side of the levee system,” Hyde-Smith wrote.

The flood, its victims and the push to complete the plan have received national media attention recently. Getting less attention is whether the old plan is viable or likely to be completed.

It’s a deadly combination. When the Mississippi and Yazoo rivers are high due to rain and snowmelt coming down from the north, it spells trouble for residents and farmers in the South Delta when heavy rainfall also happens here. Rain water that the ground can’t absorb backs up when it can’t drain into the river system.

The U.S. Army Corps of Engineers came up with a plan to alleviate flooding when that situation occurs, as it has many times since the disastrous floods of 1927. It completed about 75 percent of the planned construction by 1969, including levees and canals. The last part of the plan calls for a large pumping station to pump water out of the backwater even when river levels are high.

The Environmental Protection Agency stopped construction of the pumping station in 1970, and it vetoed completing the plan in 2008 under the George W. Bush administration.

“Construction and operation of the proposed pumping station would adversely impact at least 67,000 acres of wetlands and other waters of the United States,” the EPA wrote. “EPA has determined that these impacts would result in unacceptable adverse effects on fishery areas and wildlife.”

In 2004, the late Sen. John McCain of Arizona called it “one of the worst projects ever conceived by Congress.”

Today, the Corps closes floodgates to prevent the rivers flooding the region; however, when rainwater is also high, that water backs up behind the gates. Trapped within the Corps-constructed levees, the land floods.

In her letter to the president, Hyde-Smith suggested temporary pumps “to remove floodwaters until a long-term solution is constructed,” and using money from the newly passed disaster relief act to pay for them.

Hyde-Smith is among many advocates of reversing the EPA’s 2008 decision and completing the pumps to provide a permanent solution. Last April, EPA Administrator Andrew Wheeler told the senator that the agency is reconsidering the veto.

It’s exactly what environmentalists fear. In their opposition to the pumps—in agreement with the EPA decision—they say a humongous pumping station costing hundreds of millions would drain a complex of sensitive wetlands while mostly benefiting large farmers.

“To me, this is something of a Trojan horse to get pumps in place that would stay in place,” Melissa Samet, senior water resources counsel for the National Wildlife Federation told the AP.

The Corps has been applying engineering solutions to the mighty Mississippi River in an attempt to control its waters for decades. Samet called the multi-state system a balancing act of who floods and who is protected.

Several old studies indicate that floods would increase in areas outside the levee system, she noted, and any increase in the river levels could have disastrous affects downstream. For example, fresh water coming through a New Orleans spillway is killing seafood and marine life by decreasing salinity in sensitive estuaries.

“If you start pumping, you have winners and losers,” Samet said, and suggested it would be better to elevate homes and roads instead.

Such a solution would not alleviate issues of farmers being unable to plant their flooded fields, nor would it help residents who have to boat to their front doors. That’s what Redwood resident Stormy Deere, 44, has been doing since March.

“Emotionally, I have good days and I have bad days,” Deere told NBC News. “Some days I’m ready to go, some days I look outside and I want to despair. I want to just lie down and die. But that’s not an option.”

Can Trump Solve It?

In its near 50-year history, the EPA has only used its veto power under the Clean Water Act a dozen times. The decision to stop construction of the Yazoo pumps was one of those vetoes, and the agency did not made it lightly.

“It was a hard decision because EPA knew the area needed flood protection but our analysis of widespread environmental impacts, costs, and other complications fully justified the veto at the time,” Ben Grumbles said in a statement to NBC News. Grumbles, the former assistant administrator for water at the EPA and Maryland’s current secretary of the environment, said he “proudly signed the decision.”

The federal courts upheld the EPA veto in 2011, when the Mississippi Levee Board sued the agency.

Today, it will likely take an act of Congress to authorize construction and funding of the pumps. The estimated cost is more than $300 million.

It’s less likely that the Trump administration could successfully overturn the veto to move the old project to completion. No EPA veto has ever been overturned, and doing so will most likely lead to a long and rancourous court battle with environmentalists instead of a quick solution to the flooding.

“There are layers of reasons why this is a bad project, but worst of all is it really gives a false promise of hope to people who are suffering from flooding,” Samet told NBC. Completing the pumps would only alleviate about half of the current 550,000-acre flooding, some studies estimate.

In his statement to NBC, Grumbles said the EPA moved forward with the veto in 2008 to clear the way for federal agencies to explore new solutions.

“Alternative, nonstructural flood control measures and measures that didn’t involve the large pumps (which would drain so many wetlands) never got much traction, so the only solution at the time was to use the veto pen and commit to work with the Corps, the levee board, and impacted communities in the future on a more acceptable project,” Grumbles wrote.

Leonard Shabman, a water and environmental researcher who has worked with the Corps and the EPA on the Yazoo project since the 1980s, has produced numerous studies focused on solutions to the flooding problems in the South Delta.

Alternatives to the pumps, however, have never gained any traction. Environmentalists claim locals aren’t interested because they don’t come with juicy construction contracts benefiting a small number of Mississippians.

Regardless from which side of the debate you look, the bottom line is that nothing constructive has happened in the 11 years since the veto.

“The veto just made the thing end,” Shabman told NBC. “No one picked up an alternative. No one said, ‘What else can we do?’”

Shabman also believes there’s little the Trump administration can do to solve the flooding.

“If you look at what could be done between FEMA, EPA, USDA, the Corps and others, it’s possible you could do something that passes muster with the current authorization that would (also) pass Congress and actually get funded,” he said. “But I’m not sure there’s that much creativity in this administration.”

None of the numerous studies about the environment or any of the suggested alternatives make a difference to the farmers who are looking over flooded fields that won’t see a crop planted this year. None of it makes a difference to residents with damaged or destroyed homes. They just want this four-month flood to end. They want things back to normal.

And the politicians? They will continue to advocate for completing the project despite the roadblocks because that’s what their constituents want.

“It’s like the third rail of Mississippi politics: You have to be for the pumps,” Shabman said.

Stormy Deere has a different take.

(Information from the Associated Press and NBC News.)