Cam Newton to the NFL 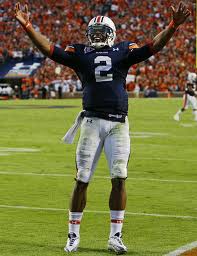 AUBURN — Auburn junior quarterback Cam Newton will forgo his senior season and make himself eligible for the 2011 National Football League Draft. The 2010 Heisman Trophy winner, Newton helped lead Auburn to a perfect 14-0 record and the BCS National Championship. He rushed for 1,473 yards and 20 touchdowns while passing for 2,854 yards and 30 scores. This decision was difficult for me and my family,” Newton said. “After talking to Coach Chizik and Coach Malzahn, I think it is best that I make that next step in my career and forgo my senior season and enter the NFL Draft. It was a very hard decision for me, especially after coming off the great season we had at Auburn. I’m blessed to have been around an excellent environment and have great teammates, coaches and support from the Auburn family. It’s been a blessing for me to be a part of something so great,” Newton said. “Any time you win games it’s a big deal, but for this school to win a BCS National Championship, what a way to make people happy. Auburn is a special place that I can call home.” Newton broke numerous Auburn single-season records, including rushing touchdowns (20), passing touchdowns (30), touchdowns responsible for (51), total offense (4,327) and rushing yards by a quarterback (1,473). “We appreciate Cameron’s many contributions to Auburn and the outstanding leader that he was for our football team,” Auburn head coach Gene Chizik said. “He had one of the greatest individual seasons ever by an Auburn player and was a key part of our championship run. Cam will always be a member of the Auburn family and we wish him the best in his future endeavors.” Newton was named the Walter Camp and Associated Press National Player of the Year, won the Maxwell Award as the nation’s top player and the Dave O’Brien Award as the country’s top quarterback.