Buffalo Bill Cody in 1903 (Photo in the public domain)

As shots rang out just above the trees, the boys who were perched among the branches “came out of those trees like overripe pears falling,” wrote the late Vicksburg historian V. Blaine Russell .

The lads thought they had found the perfect — and free — vantage point to see the show at the fairgrounds. The man with the gun, who pretended he didn’t see the youngsters, was William F. “Buffalo Bill” Cody who brought his Wild West Show to Vicksburg Nov. 17, 1908.

It was a typical performance, complete with a cast of hundreds. There were stagecoach holdups, Indians, cowboys and pretty girls and, of course, the star of the show, Buffalo Bill.

It wasn’t the first time he had brought his show to Vicksburg. His troupe had come to the River City Nov. 26, 1874, and had staged “The Indian Ball Play” featuring 30 Choctaws, but the show, including a dance afterward, wasn’t much of a success, according to John G. Cashman, editor of The Daily Vicksburger.

Despite the poor attendance, the troupe came back July 2, 1886, and put on “a grand Indian Ball Play and War Dance” according to the Vicksburg Herald. The paper also stated that “Sixty genuine scalp-taking Redmen” would parade downtown.

When the show returned to Vicksburg in 1908, it wasn’t just with dancing Indians but with a variety show. A writer for The Vicksburg Evening Post described it as “a thrilling piece of acting as the Indians ride like mad after the coach filled with terrified passengers. From the top of the swaying vehicle the fearless cowboys pour in a steady fire on the galloping redskins. The driver lashes the horses into a wild run. This is a scene to delight a boy’s heart and make one’s pulse beat a little faster.” 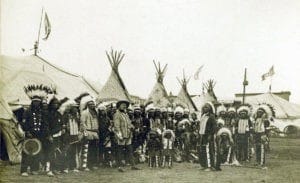 Cast of Buffalo Bill’s Wild West in 1890. (Photo in the public domain)

The Buffalo Bill show included 550 horses, and the Post noted that “no bolder or better horsemen have ever been seen. … the fiercest bucking broncos were ridden with grace by the hardy cowboys and cowgirls. … Picking up handkerchiefs from the ground. while running their ponies at breakneck speed was something the girls did to elicit applause.”

There were a variety of other acts, too, including precision drills by a company of Zouaves, Indian war dances and a horse that “did the hoocheecoochee dance — quite remarkable.”

Another act was possibly the forerunner of donkey basketball popular in later years: It was a football game played on horseback. The horses wore breast plates, knee pads, shin guards, boots and nose pads. The riders didn’t touch the ball, but the horses pushed, shoved and kicked it.

The highlight of the show was not the dancing girls, Indians and horses but Buffalo Bill himself, “gray and old, still robust and active and quick of eye, who was tumultuously applauded …” He was noted for his ability to shoot, and he gave a demonstration as “from the back of a galloping horse the old scout and hero of a hundred Indian fights was able to crack every glass ball pitched into the air, no matter how fast or furious the tossing was done.”

The day before his Vicksburg performance, Buffalo Bill had set up a tipi at the Kleinston landing where admirers visited with him while his workers set up the props for the show.

The old man told a Post reporter that his show had been on the road for 30 years, and he had missed only two performances. 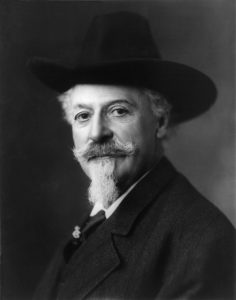 Buffalo Bill Cody in 1911. (Photo in the public domain)

He interrupted the conversation once, saying “Here, have a cigar. I have this kind made for me by thousands.” The reporter wrote that “the old scout puffed on a big black cigar and then there was good opportunity to watch those bright blue eyes in thought as he gazed alternately out of the tent and then at the curling smoke. His hair has turned snow white but he has plenty of it. He is six feet tall and straight as a young Indian.”

The newspaper said about 8,000 people had seen the two performances paying either 50 cents or a dollar for a glimpse of life as it used to be. “In this prosaic age of the trolley and pullman and the steamboat, it is hard for us to appreciate conditions that existed on the Western prairies …” The show was said to be “clean, moral and wholesome and provided lessons for the young and refreshes the memories of the old.”

Buffalo Bill had brought a taste of the Old West to the Old South.

Tom Wince and the ‘bitters and sweets’ of the Blue Room