Bryant says Barbour-Perry would be a "dream ticket" 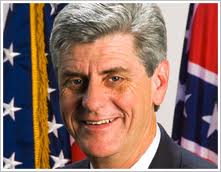 POLITICO.COM Mississippi Lt. Gov. Phil Bryant, in town for the NGA Winter Meeting, told POLITICO Friday that while he’s supporting his governor, Haley Barbour, for president, he likes Texas Gov. Rick Perry as a second choice. “I really like Rick Perry. From what I understand he’s not running. He has a real Reaganesque personality about him. He’s so relaxed, he’s such a great communicator. He is really one of the most dynamic leaders that we’ve seen on a national level. Texas is number one in job creation and economic development,” the Republican said. Bryant, a former state legislator who’s running to replace the term-limited Barbour in 2011, described his preferred GOP ticket for 2012: “If I could get Barbour-Perry, what a dream team.” There’s considerable buzz about Barbour’s candidacy in the Republican Governors Association meetings he’s participated in, according to Bryant. “Most of the talk at the Republican Governors Association is about Haley Barbour. Haley Barbour is the guy that as chairman of the RGA, just helped elect 26 Republican governors. If Haley Barbour’s running for president, he’s going to call on 29 of his friends to say help me organize in your state,” he said. “What Haley’s advantage is, if he’s just finished helping new governors get elected . . . he’s obviously going to call on them and say, ‘When I make the decision to run, I hope you support me. I hope your campaign organization in your state will be my campaign organization as I run for president. And this is all about the ground game.” Aside from Perry, another outside governor who’s earned Bryant’s admiration is Chris Christie, though the first-termer from New Jersey might be a little too brusque for Southern tastes. “He’s just such a fresh bold guy, but you know all he’s doing is just speaking honestly. You don’t want to be rude. There’s a thin line there, I’m from the South,” he said. “Female vote would not be as strong. A Southern woman would say, ‘That is not very pleasant. He should not have said that.” But, Bryant added: “The tones need to be direct at times when you’re talking about very critical issues, like breaking the budgets within the states with an overbearing health care bill that’s been put upon us.”]]]]> ]]>

What happened to the weather?

Hosemann says, "There is still more to be done"