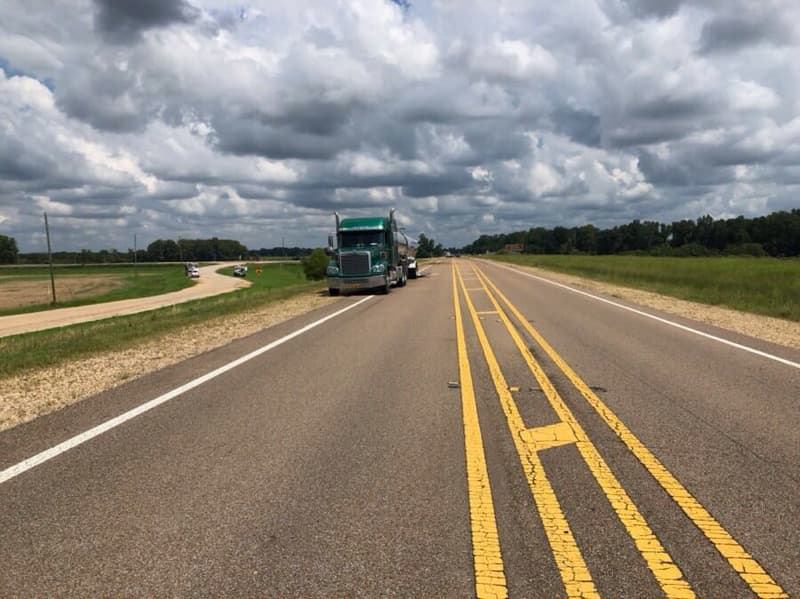 Officials have reopened the roads.

The tanker truck involved in the accident was owned by Sindle Trucking based in El Dorado, Ark., according to WCEMA Director Elfer, not Vortex Corp. as previously reported.

Officials are estimating that the roads will open around 3:30 p.m.

Highways 61 and 465 are shut down in the area, probably for many hours. Hwy. 61 is backed up at the Redwood exit.

The 18-wheeler belongs to the Ohio-based Vortex Corp. It was traveling south on U.S. Hwy 61 North headed toward the harbor project.

When it struck the farm tractor, the collision caused a gash in the tank, which is leaking a petroleum hydro carbonate distillate. It is still leaking.

John Elfer from the Warren County Emergency Management Agency is on the scene.

Although there is a strong, putrid odor, it apparently presents no immediate danger to area residents.

Early reports indicate an 18-wheeler hit a farm tractor at the northern tip of the Yazoo bridge, spinning the tractor around. The truck is supposedly leaking a petroleum-based product. No injuries have been reported.

The Vicksburg Daily News is on the site. Check our Facebook page for live updates.

$100 buys more in Mississippi than in any other state, study finds

Vicksburg park to commemorate 400 years of Africans in America