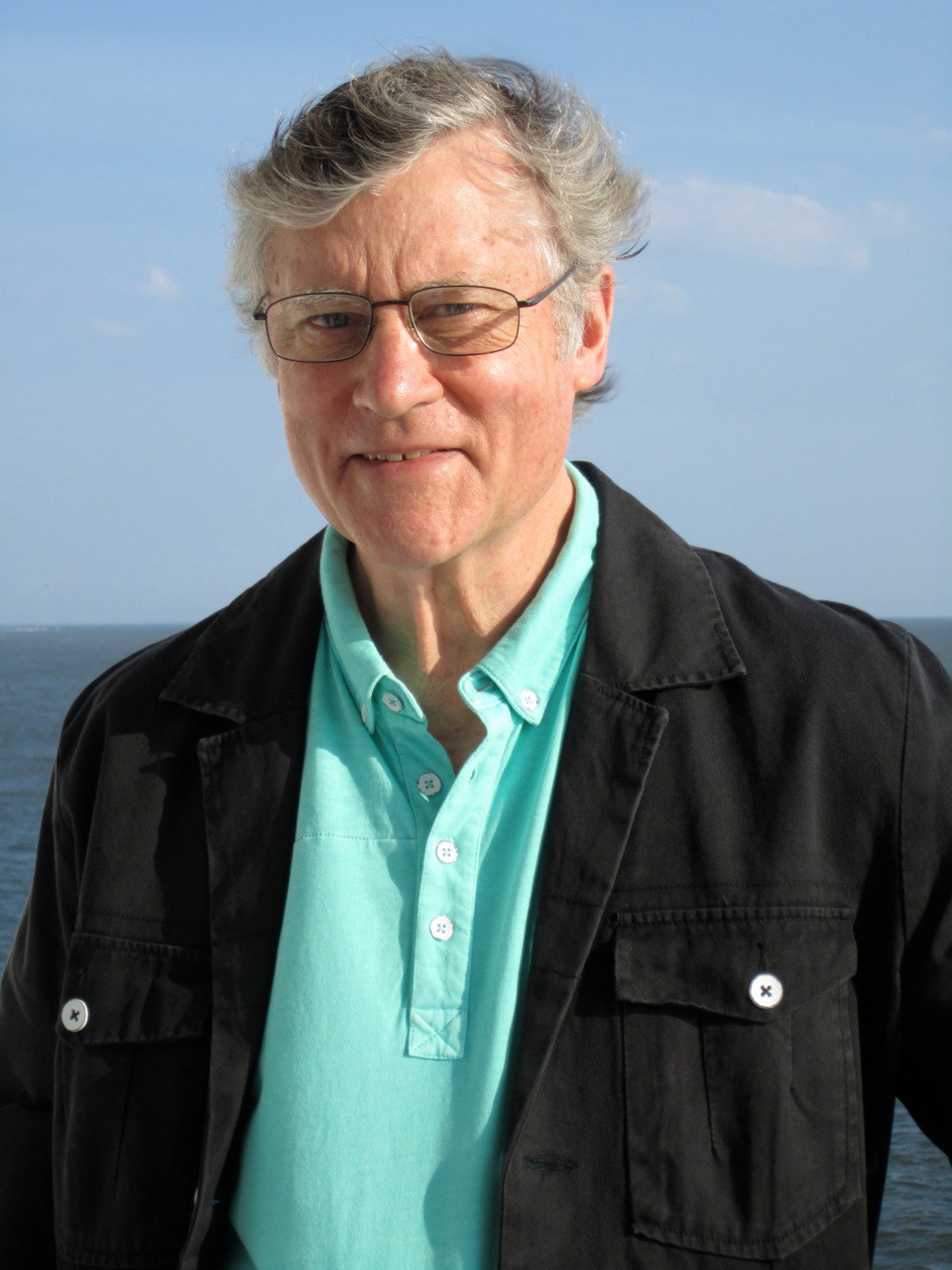 A large crowd of family, friends, and dignitaries showed up to support and honor Dr. William Ferris as his Blues Trail Marker was placed in downtown Vicksburg. 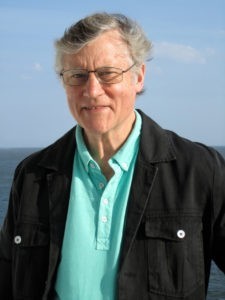 Among the many speeches, a long time friend of the family spoke of the man who became the Grammy-winning Dr. Ferris.  Here are the words of Attorney Blake Teller on this joyous day:

The same might be said for our honoree today, Dr. William R. Ferris, Jr., affectionately known as Bill or Billy by most of us here.  Billy recognized the value of the Blues before the Blues were considered cool.  So, it is fitting that we honor Billy Ferris with the Blues Trail Marker right here on Catfish Row where the hills of Vicksburg bow down to the flat fertile ground along the Muddy Mississippi which is, as author David Cohn described it, the beginning of the Mississippi Delta which stretches from right here North to the lobby of the Peabody Hotel in Memphis, Tennessee. It is in this very area of our country that the music we call the Blues developed and, through its lyrics, shares the stories of the plight of African American harvesters and sharecroppers struggling through oppressive circumstances lingering from our country’s antebellum days.  If I had to put a footnote here, it would reference pages 995-998 of Dr. Ferris Encyclopedia of Southern Culture.

But it is here in the Mississippi Delta and Vicksburg, Warren Country, where young Billy Ferris set out to tell the story of the people and of the rhythmic music of the Deep South-which tells the stories of the human experience in the American South.  When Billy was only twelve years old he recognized that he loved gathering the stories of the lives of those around him-who had stories to tell.  He took to heart what his father and South Warren Country farmer, Bill Ferris, Sr., told him, and I quote, “You can learn a lesson from each person you meet in life if you just listen.”

Not only did Billy listen to the stories of the people of the American South, and more specifically, the Mississippi Delta and Vicksburg, Warren County, but he preserved their stories for us to hear and enjoy and learn lessons from.

Dr. Ferris tells his students of the old African proverb that ‘when an old man or woman dies, a library is burned to the ground’. He also tells them, ‘If you follow your heart, you will be successful and happy with your life.” Bill is a testament to the truths of the statements. From the time he was twelve, he followed his heart and over his lifetime has produced a priceless body of work that preserves and tells the stores of the people of the South and of the development of the Blues. 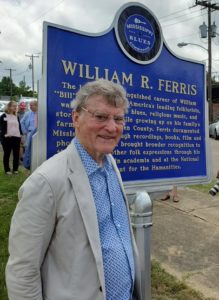 Just this past February, Bill’s production of “Voices of Mississippi: Artists and Musicians Documented by William Ferris” earned not one, but two Grammy’s. This Box set of music, written stories, film, and photographs includes 3 discs, one of which is dedicated to the Blues. It also included videos, photos, and writings that preserve the human experience and culture of the South for us to experience as if we were there in person with the artists and musicians.  THANK YOU BILL, AND CONGRATS!

On a personal note, my family considers Billy and the Ferrises as family.  My dad grew up with Billy and had numerous opportunities to introduce Bill at functions where he would be the keynote speaker.  My mom happened to preserve a set of Dad’s notes for one of the introductions he made several years ago related to Bill’s role in the founding and continued successful operation of Vicksburg’s own Southern Culture Heritage Center.  In Dad’s handwriting, he states, “Bill is my best life time friend.” I understand that statement to mean that Bill and Dad were friends from an early age and remained very close throughout my Dad’s 74 years.  Indeed, I have childhood memories that include frequent visits to the Ferris Farms property in the rolling hills, pastures and timberlands of South Warren Country where Billy and the Ferris family showed us true Southern hospitality as we enjoyed dinner, stories from Billy, his wonder mother Shelby, and other family members, out on the front porch of the farmhouse, or while reclining in hammocks under a canopy of muscadine grape vines.  Those who know the Ferrises know of the family trait of great conversation and storytelling.

I also recall a time when Billy visited my childhood home at 110 Moonmist Drive in Enchanted Hills here in Vicksburg.  It must have been during a visit he made home while serving as Associate Professor in the American and African American Studies at Yale University between 1972-1979.  I’ll never forget the fun we had listening to his stories, and the music he played on the guitar and maybe the harmonica too.  His guitar playing had a distinctive but enjoyable squeak as he changed chords.  But it also had a squawk coming from his shoulder where sat a talking or was it singing, Parrot. I dare say whether it was Billy or the Parrot, the singing is the best left to Son Thomas or Willie Dixon…

For a person who told his teacher at a young age: “I ain’t going to no college,” Billy is quite educated.  Before his tenure at Yale, Billy had earned a Bachelor’s degree in English literature at Davidson College in 1964; He earned a Masters in English Lit at Northwestern in 1965, then did a year as a Rotary Scholar in Dublin, Ireland before returning to the US to earn another Masters and Ph.D. in folklore from the University of Pennsylvania in 1969. From 1970-1972 he was Assistant Professor in the English department at JSU.  Then he went to Yale as I previously mentioned.  Even while at Yale, Bill continued his work here in the deep south as he co-founded the Center for Southern Folklore and served as its director from 1972-1984.

In 1979, he returned to live in Mississippi and founded and became director of the Center for Study of Southern Culture at Ole Miss. While at Ole Miss, Billy may have been more widely known as “Dr. Blues,” the host of the “Highway 61” Blues program on Mississippi Public Radio.  In 1997, then President Bill Clinton appointed Dr. Ferris to serve as Chair of the National Endowment for the Humanities and Billy served in that capacity until 2001 after which he joined the faculty of UNC and served as Director of the Center for the /Study of the American South, among other capacities, until his recent retirement about a year ago.

Dr. Ferris is the author of no less than ten books, producer of no less than fifteen film documentaries, and has over 250,000 items preserved at a library at UNC. He has already been inducted into the Blues Hall of Fame in Memphis, and has even been knighted by France! I can attest that is probably not ‘tall talk’ as I have personally observed his horseback riding skills. On one occasion Billy rode up to the side of a pond on Ferris Farms, jumped deftly off his horse, snagged a baby alligator out of its mama’s nest on the bank, remounted the horse and rode away before mama gator knew what happened. The baby gator was named Agnes and served as a Teller family pet for years later.

Other than documenting the blues artist, southern folklore, and catching gators, Bill is probably most proud that he is married to Marcie Cohen Ferris, another talented Educator and storyteller by her own right. Marcie also was a professor at UNC and an author among many other accomplishments. Her work centers around Southern history and culture too.  Bill also has a daughter, Virginia. 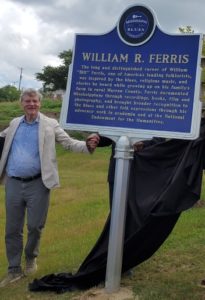 Please join me in congratulating our native son, Dr. William Ferris, on his much deserved Mississippi Blues Trail Marker.

A Lot of Critters in a Small Area