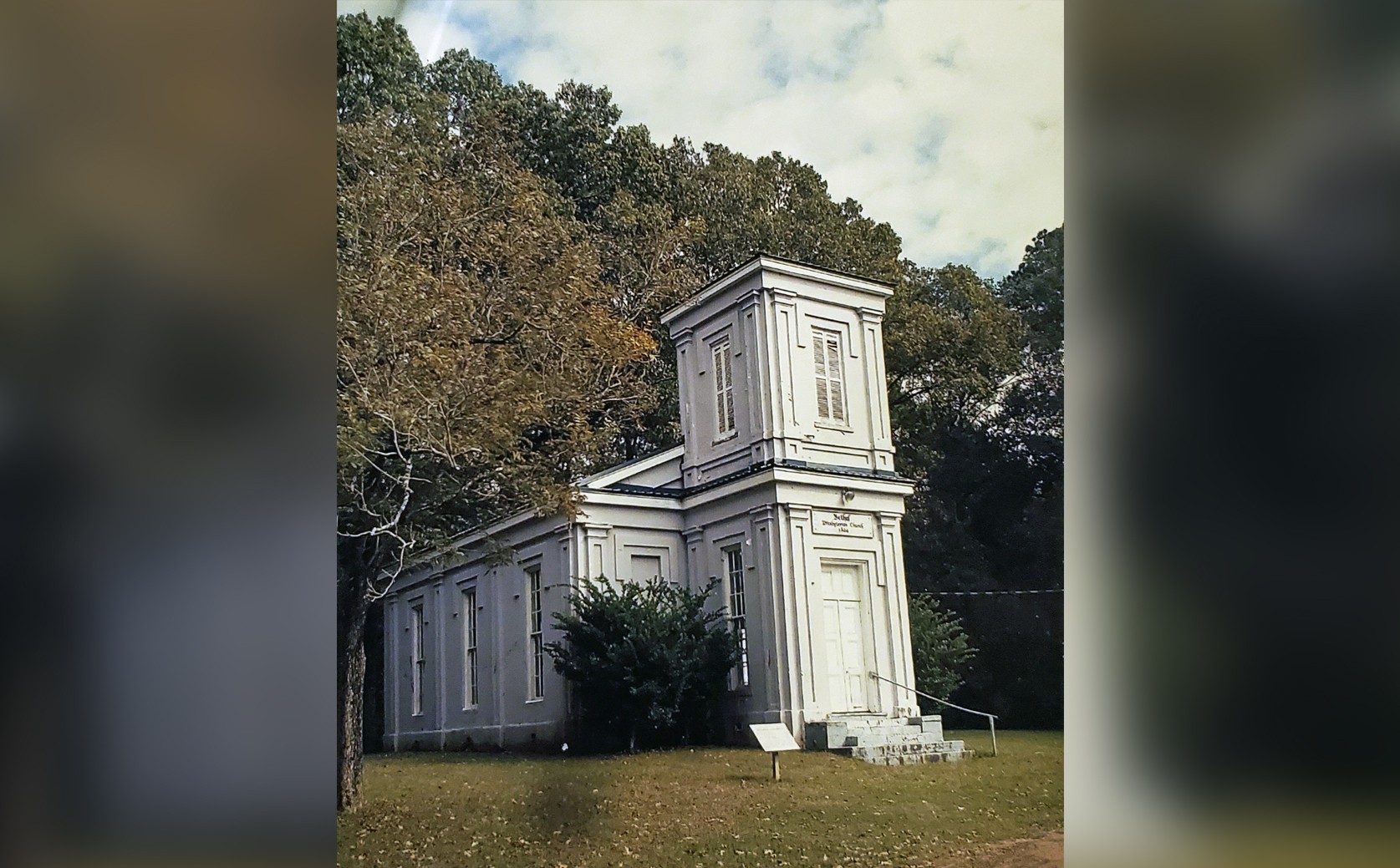 Bethel Church was founded in the 1820s. This building was constructed in the 1830s and practically rebuilt after it was hit by a tornado in the 1940s.

Bethel Church has no members.

But the historic Claiborne County structure has friends who meet twice a year to sing songs of praise, to hear the Gospel proclaimed and to take up a collection for the maintenance of this unique structure that has been very important in Presbyterian history.

Located on the road between the ruins of Windsor and Alcorn State University, the church was organized from 1824 to 1826 but met in several locations before the present site was chosen in the late 1830s. The land, three and a half acres, was given by Lewellin Price, and he attached the following condition: “That no house or shop for selling or retailing intoxicating liquors shall be erected on the above described lot or parcel of ground” and that no “enticements shall be Created of any kind whatsoever thereon calculated to interfere with the studious habits or good order of the students of Oakland College and in case this condition be violated then the said lot or parcel of ground together with the improvements thereon erected shall be forfeited and revert back to my legal heirs.”

The establishment of Oakland College nearby in 1830 was an important chapter in Bethel’s history. The Presbyterian school (now Alcorn) provided ministers from the faculty. Rev. John R. Hutchison was both pastor of Bethel and professor of ancient languages in 1843, and Dr. Jeremiah Chamberlain, first president of the -college, preached often at Bethel. He delivered his last sermon at Bethel before he was assassinated on campus for his anti-slavery views on Sept. 5, 1851. 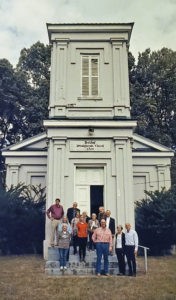 Bethel was inactive for a number of years around the time of the War Between the States, being revived in the 1880s, then closing its doors for 35 years starting in 1896. In 1930 Bethel was re-opened, a Sunday school was started, and the church reorganized with 28 members. The church was served by whoever was pastor of the First Presbyterian Church in Port Gibson.

A tornado practically destroyed the building on Nov. 6, 1943, but in late 1944 and early 1945, the building was reconstructed, and it was rededicated to the glory of God on Easter Sunday of 1945.

It was rebuilt but extensively changed. The pointed steeple was removed, the wooden floor replaced with concrete, the slave gallery removed, and the building reduced in length.

In 1950, worship services were held bi-monthly for the 34 members.

Some badly needed work was completed both inside and outside the structure in 1960, and the presbytery declared the building to be an outpost, or chapel, of the first church in Port Gibson. Two years later, 20 members of Bethel were officially transferred to membership in the Port Gibson church, although church services were occasionally held at Bethel. Currently, meetings are held in the spring and fall on Sunday afternoons.

Near Bethel are reminders of what was once one of the richest parts of the state. The old Murdock home, antebellum Cane Mount, is now a beautifully restored bed and breakfast, and only a few miles away are the ruins of Windsor. There is also the pretty Alcorn campus, and just beyond it is the fascinating old town of Rodney.

And there was Bruinsburg, the site where several important historical events happened, though they hardly get a footnote in most history books.

Peter Brian Bruin founded Bruinsburg, which was never incorporated, in 1788 where Bayou Pierre runs into the Mississippi. Bruin was Irish. He came to New England as a youth and was wounded and imprisoned by the British when he was a soldier in the American Revolution.

When he came south with his family, he built a house on an Indian mound. The Spanish appointed him an alcade, or official of the government, and when the United States took over 10 years later, he was named one of three territorial judges.

In January 1807, Judge Bruin had a surprise visitor, an old friend from their days together as soldiers in the American Revolution. He was Aaron Burr, a hero of the revolution and later vice president of the United States. It was he who fought Alexander Hamilton in a duel, Burr’s bullet finding its mark, ending Hamilton’s life and ruining Burr’s political future.

What Burr’s plans were in visiting his friend Bruin is still not certain. Some thought he was going to try to set up a new nation in Spanish-held territory and try to entice Deep South states to join. He did have a flotilla of flatboats headed down the Mississippi, filled with soldiers and families.

Thomas Jefferson, who had defeated Burr for the presidency by one vote, accused him of treason and ordered his arrest. Acting Gov. Cowles (pronounced Coals) Mead bragged for the rest of his life that he had captured Aaron Burr, when in reality, Burr presented himself to authorities saying basically, “I hear you are looking for me.” Though Burr was eventually tried for treason, the Supreme Court ruled he was not guilty.

One of Burr’s outspoken defenders was future president Andrew Jackson who, though a Carolinian, had moved to Bruinsburg in 1789. Jackson built a cabin and made his living selling whiskey and slaves, and he had a horse racetrack. After he married Rachael at the nearby Green mansion, Springfield, the couple honeymooned at Bruinsburg before moving to Tennessee. 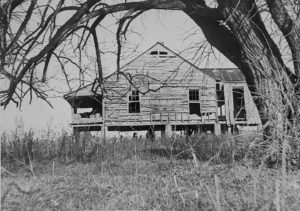 This was the only building still standing in Bruinsburg when the author took the photo in the 1980s. Now, it’s gone, too.

Bruinsburg’s greatest date with destiny was to come in 1863 when the Union army, commanded by Gen. U.S. Grant, crossed the river there on its way to Vicksburg. It was the largest amphibious landing in history until the invasion at Normandy in World War II.

A Confederate telegraph operator watched the grand panorama as 40,000 men in blue were transported from the Louisiana shore. Behind them, plantation buildings were ablaze.

Judge Bruin died in 1827, but settlers continued to come and farm the rich bottomlands. As late as the early 1900s, several dozen families lived in the Judge’s burg, and buildings included not only houses but also a church, school and post office. Gradually all moved away.

When Eudora Welty visited in the late 1940s, she found little but a few fishermen’s boats tied to some cypress trees, and she wrote that it was “almost as if a wand had turned a noisy cotton port into a handful of shanty boats. But Bruinsburg landing has not vanished. It is this.”

In the 1980s, one old house stood precariously on high pilings, and cattle rubbed their backs against the timbers, but now it is gone, too. There once was a metal sign nailed to a tree, but growth had covered all but the word “Bruins.”

It was at Bruinsburg that the first U.S. flag was raised in the Mississippi Territory.

Today nothing remains but history

Down the road still stands Bethel Church, its walls once scarred by Yankee bullets, historic markers in the churchyard telling of the fighting that took place there over 150 years ago.

So much happened in the Bethel community. What a shame if that history should be forgotten.