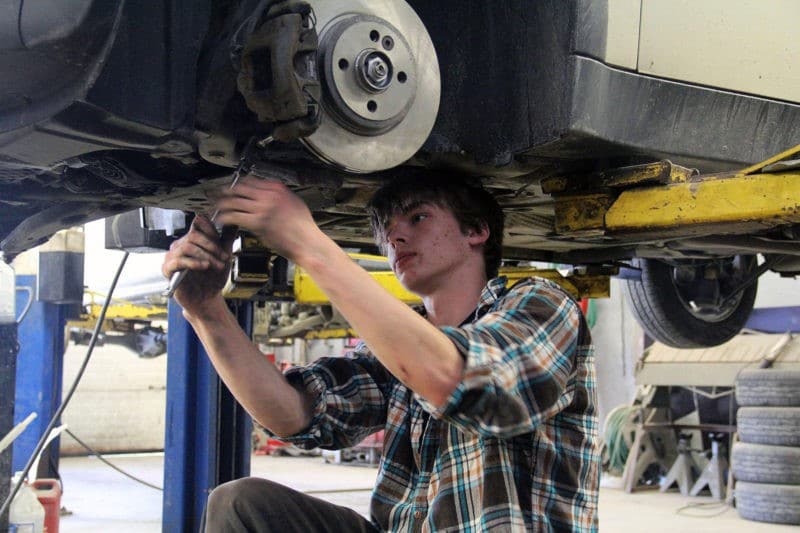 by Megan Conn, The Hechinger Report

Rising use of automated technologies has eliminated thousands of jobs in Mississippi, and many more are at risk, according to a recent report by the Brookings Institution. The report looked at the percentage of tasks — that is, what people actually do at work, rather than the skills needed to perform a particular job — that could be automated. An average of 47.7 percent of the tasks performed by Mississippi’s workforce could be automated using today’s technology, a figure higher than in 41 other states.

At greatest risk are those jobs that consist of largely routine functions, whether manual or clerical. In Mississippi, the study found that truck drivers, wait staff, fast food workers and stock clerks are at the highest risk of having their jobs automated.

Automation affects workers around the world — nearly half of the employers surveyed by the World Economic Forum last year expected automation would reduce their workforce by 2022. But Mississippi’s risk exposure to automation is elevated by a combination of factors.

“As machines become more important, we need to get better at being human. We should be migrating to the things machines can’t do, like empathy and caring and creativity.”

Data collected as part of the Brookings study shows that more jobs are at risk in the state’s northeast and east central counties like Clay, Lowndes and Lee, where more than 49 percent of tasks could be automated. By contrast, counties near the capital and Gulf Coast have a lower automation exposure; the average automation exposure of a job in Hinds County is only 42 percent.

So what can Mississippi do to prepare workers? Experts and educators point to a few strategies — some of which are already being explored by leaders within the state:

The first thing Muro recommends young people do is get a college degree.

“It’s very apparent: The likelihood that one will find oneself in an automatable, low-skill job is much higher if you don’t have that degree,” he said.

In fact, 80 percent of Mississippians who sought employment assistance in 2015 had less than a two-year degree. The state workforce board’s two main goals are improving the workforce participation rate, which at around 55 percent is one of the nation’s lowest, and increasing the number of people with more than a high school credential, according to its 2018 plan.

But that doesn’t mean all students need to go to a four-year college. Mississippi’s 15 community colleges offer relatively low-cost programs in automotive repair, nursing, utility line work and diesel mechanics, fields that are unlikely to be automated, according to an analysis done by the Georgetown University Center on Education and the Workforce on behalf of The Hechinger Report.

“We are constantly in touch, on a weekly basis, to see what their demand is and continuously improve our methodology and equipment and curricula,” said Raj Shaunak, the college’s vice president of workforce and community services. These relationships proved essential in helping retrain 838 of the more than 1,600 local workers who were left jobless after the closure of a Sara Lee plant in 2007, he said. At the college, workers who used to make hot dogs and sausages gained the skills to manufacture steel and engines.

“Change is the only constant, and we understand that,” Shaunak said. “What we’re teaching is skills and thinking. We teach learning to learn, to constantly adjust.”

Training for a job with stable long-term prospects can begin well before high school graduation. At the Madison Career and Technical Center in Mississippi’s Madison County, teens take two-year course sequences in fields at low risk of automation such as automotive services, health science, construction, and engineering and robotics.

Instructor Dale McCraw has taught automotive services for 35 years. While many assembly-line jobs have been replaced by automated production, he’s seen rising demand for capable repair technicians. A recent survey of auto shops he conducted confirmed the trend.

“Every place had a shortage of technicians — one was even offering a $10,000 signing bonus for a tech that could do transmission work,” he said. “Repair-side jobs are increasingly available and pay is going up. The nice thing is, it’s pretty recession-proof, because even if people aren’t buying new cars, they still have cars that need repairs.”

But not all Mississippi students have access to high-quality career education programs. A recent effort to standardize automotive programs by requiring them to attain an Automotive Service Excellence certification prompted the closing of at least thirty programs, said McCraw.

He said low pay undercuts schools’ ability to train and retain instructors with specialized technical knowledge. Mississippi has paid its teachers less than any other state for the past three years, according to the National Education Association. Even when adjusted for cost-of-living, teacher’s pay in the Magnolia state ranks 37th in the nation.

“You walk in as a teacher and you can leave 35 years later as a teacher — there’s no money, no bonuses,” said McCraw. “If I’m a young teacher and another state is offering me a raise, I’m gonna leave. I encourage my kids to follow the money.”

Preparing students for jobs that are likely to survive automation also means confronting the stigma that learning a trade is less valuable than a four-year degree. Both McCraw and Shaunak said they regularly hear from parents and counselors who see technical education as a fallback option.

“We’re trying to change the mindset within the K-12 system that modern manufacturing in the Golden Triangle is not the 4 D’s: It’s not dirty, not dangerous, not disappearing, and not for the dumb,” said Shaunak.

McCraw pointed out that automotive technicians need to understand advanced concepts like kinetic friction, thermal dynamics, and Pascal’s law, which governs the fluid mechanics of braking systems. He said his high school students use a college-level textbook.

Workers seem to be taking note of the value of technical training. Shaunak said that every year, East Mississippi Community College enrolls about 1,000 students who already have a bachelor’s degree or higher, often in the liberal arts, but have found their skill set isn’t aligned with a high-paying career.

McCraw recalled a student whose father, a banker, urged him to follow his older brother into banking. Instead, the student earned his diesel technician certification — and ended up making more money than his brother. McCraw said the father later called to thank him for changing his mind.

Despite the demand for technical skills, most of the core competencies that Mississippi employers reported workers needed to improve on were “soft skills” like communication, leadership and professionalism, according to focus groups and surveys administered by the state workforce board, the Mississippi Development Authority and a state wage and benefits survey.

Muro, the author of the Brookings study, said jobs that require these dynamic, responsive skills are less likely to be automated.

“As machines become more important, we need to get better at being human,” he said. “The more creative, interpersonal skills are becoming more important and less replaceable. We should be migrating to the things machines can’t do, like empathy and caring and creativity.”

Prepare for the future

The strong economy has fueled job growth, but Muro warned that a future economic downturn could hasten employers’ efforts to cut costs by replacing workers with automated technologies.

“It’s been happening steadily, but it won’t happen evenly: The largest surges of automation occur in economic downturns,” he said. “The future of work is already here — it’s been here for 25 years. We need better systems of workforce training to help people adjust, because there’s going to be some turmoil coming.”

This story was produced by The Hechinger Report, a nonprofit, independent news organization focused on inequality and innovation in education.