August has proven to be the deadliest month in Mississippi and Warren County for people suffering from COVID-19 infections, even as new COVID-19 cases have seen a decline from their peak at the end of July. Deaths are a lagging indicator: They follow changes in hospitalizations and cases.

Monday was the 12th consecutive day of fewer than 1,000 reported cases; however, 810 deaths were reported in August statewide with 21 in Warren County. To put that in context, Mississippi reported 590 deaths in July and 339 in June; Warren reported eight deaths in July and seven in June.

In Warren County, the Mississippi State Department of Health reported 10 new COVID-19 cases Sunday and one new case Monday. No deaths were reported either day. The cumulative number of cases in the county to date is 1,314, and the county’s death toll is 46.

MSDH reported Sunday that 14 additional Mississippians died of COVID-19 statewide and 32 Monday, bringing the total number of deaths in the state to 2,473. The state’s rate of deaths to confirmed cases is about 3%.

Deaths and new cases were reported as of 6 p.m. Saturday, Aug. 29, for Sunday’s statistics and Sunday, Aug. 30, for Monday’s. MSDH usually reports new statistics on the COVID-19 coronavirus each day based on the previous day’s testing and death reports.

The number of Mississippians hospitalized for the virus as of 6 p.m. Friday, Aug. 28, is 819, showing a clear downward trend after peaking in late July at more than 1,200. The number includes 674 with confirmed cases of COVID-19 and 145 people with suspected but unconfirmed cases. Of those with confirmed infections, 215 were critically ill and in intensive care units and 111 were on ventilators. 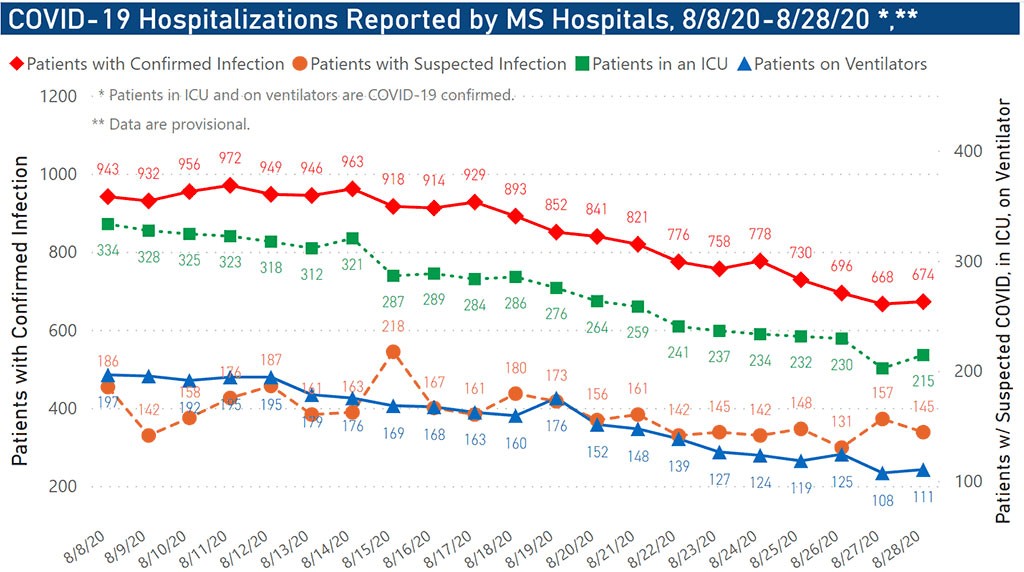 MSDH has estimated the number of people who can be presumed recovered from COVID-19 in Mississippi. That number is 67,918 through Sunday, Aug. 30. This figure is updated weekly. It represents about 81.9% of the cumulative 82,950 cases reported as of Monday, Aug. 31.

The number of cases in Warren County three weeks ago, Monday, Aug. 10, was 1,095, therefore the estimated number of people presumed recovered in the county is 1,049, or about 80% of the 1,314 cumulative cases reported Monday, Aug. 31. The county has an estimated 219 active cases.

The total number of Mississippians tested for COVID-19 (PCR and antigen tests identifying current infections) as of Sunday, Aug. 30, is 601,341 or about 20.2% of the state’s 2.976 million residents. The positivity rate (positive results to tests, seven-day average) was 13.7% Sunday, according to Johns Hopkins University, indicating Mississippi is not testing nearly enough, and results are probably an undercount of actual infections. The national rate is currently 5.7%, and a rate of 5% or less indicates adequate testing. Mississippi’s positivity rate has been the highest or among the highest in the nation for weeks.