As search for hunters continues, a local family serves 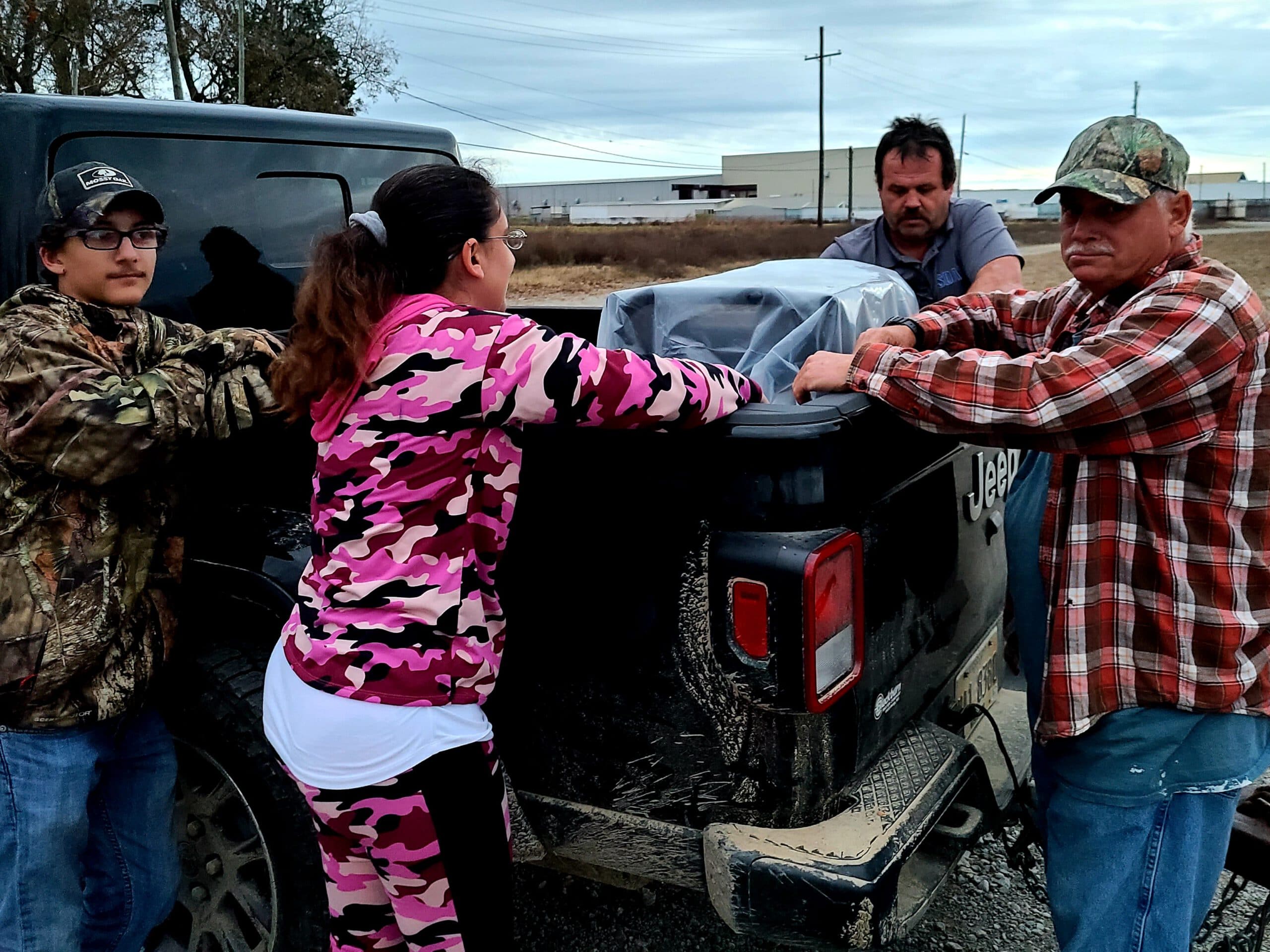 The search for Gunner Palmer and Zeb Hughes on the Mississippi River, now in its tenth day, has affected thousands of Mississippians. People from all over the region have come to the search area to offer their help.

“In my 23 years of serving Warren County, this is the largest effort I’ve ever seen,” John Elfer, director of the Warren County Emergency Management Agency, told the Vicksburg Daily News in a live interview on Tuesday. Law enforcement, firefighters and volunteers have searched day and night for the two hunters who have not been heard from since Dec. 3.

By Sunday, Dec. 6, hundreds of people covered every possible path the boys could have followed in an organized grid search on land. The mass of people created a logistical challenge for rescue professionals. In particular, restrooms and meals became issues. A hot cup of coffee after a 4-hour river search in cold, searing winds would have been extremely welcome.

It is in that capacity that a Vicksburg family is making a difference.

“Me and mom (Jimmie Storey) pulled up, went to the riverside and asked the game warden what we could do,” said Paula Chambers. “Is anyone providing food and drinks?”

When the game warden replied that it would be greatly appreciated, Chambers told him, “We’ll be back.”

She and her mom went to town, got the makings for sandwiches and “made them on the tailgate of the jeep,” Chambers said cheerfully.

“The next day we just got more stuff,” she added. 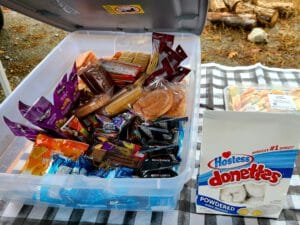 Some sweet treats for comfort are just a few of the items being provided for the search teams.

“And we’ve had a bunch of donations,” said Paula’s stepdad, Carl Storey.

“I’ve got a list of people who donated,” Chambers said. “I’m going to send them a card when it’s all over with.”

Friday evening, the family team, Jimmie and Carl Storey, Paula and Jeffery Chambers and Nathan Chambers, were breaking down their tent and putting the contents into a trailer to get everything out of the drizzling rain that had begun to fall at the search site. As the trailer filled up, a family member of one of the missing boys came by to see if the Chambers had use for a bag of ice. 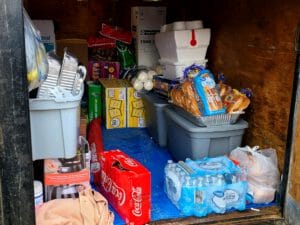 The Chambers/Storey trailer has filled up with donated items.

Nearby sat a port-o-potty put on-site by the Sheffield Rentals of Vicksburg. Seems like the Sheffield family always shows up to help when there is a need.

Beyond the ice needed to keep cold items cold, one of the things needed by the Chambers/Storey team was a way to keep hot things hot.

“We had a guy from Jackson down here, brought his trailer and all down here to start off with that Saturday (Dec. 5),” Carl Storey said. “Sunday he left, the command center left, and we didn’t have a generator, so me and him (Jeffery Chambers) went and got that generator, come down here and started doing it that way.”

They’re using the generator to power the coffee pots, making hot coffee to help power the search teams and families of the two hunters. 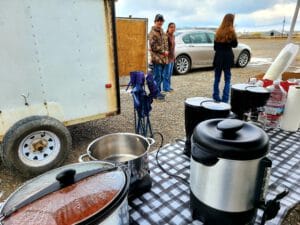 Nathan and Paula Chambers stand ready to serve as Sloppy Joe’s warm and coffee pots stand at the ready.

In their trailer, the team has a grocery store of supplies that includes sweet treats. The family can list which rescue team member likes which treat.

A week after the search began, the Chambers/Storey crew is still on-site providing sandwiches, treats, cold drinks and hot coffee to the families of the missing boys and the rescue teams searching for them.

Near sundown, the teams begin to come in off the river. The first thing many of them do is go to the Chambers/Storey tent to grab a drink or a treat. 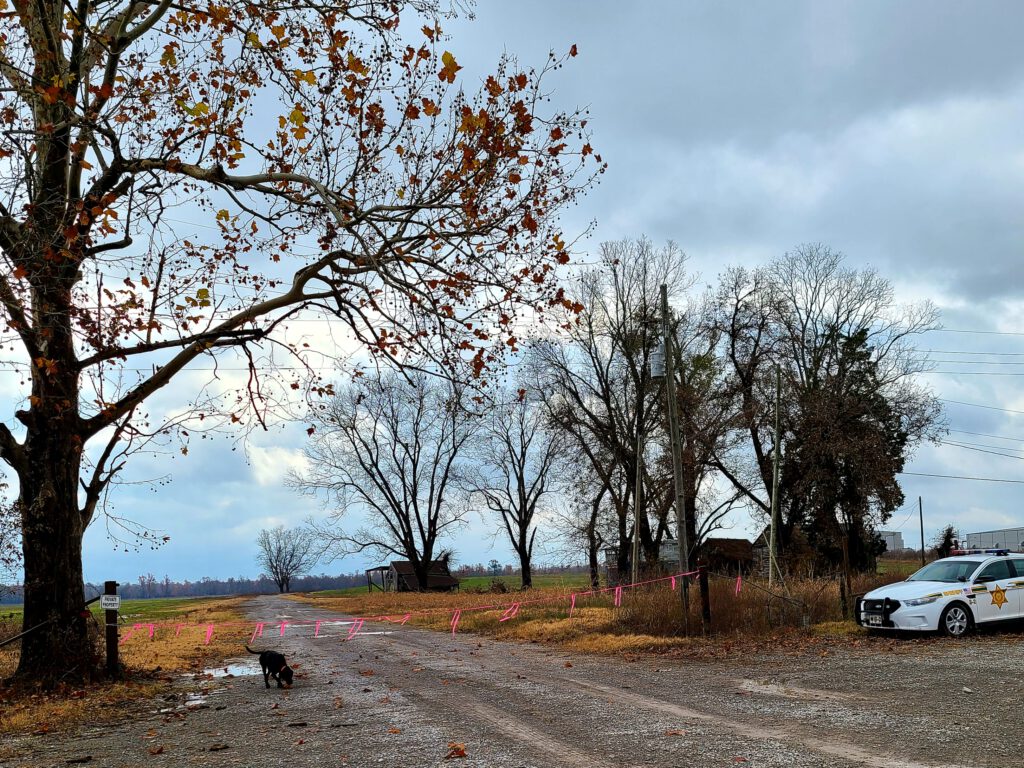 A black lab named Ranger sniffs around the search area. His buddy Kye has still not been found.

One unnamed rookie law enforcement guy names donuts as his preferred treat, and the Vicksburg Daily News has the photo evidence. We’re going to keep that photo between him and his team who got a much deserved big chuckle out of the photo after being out on the water all day.

Paula Chambers explained, “We are here to help and to serve. If that were our family out there, we know others would do the same for us.”

The search continues for the boys and the good people of Vicksburg continue to love their neighbor.