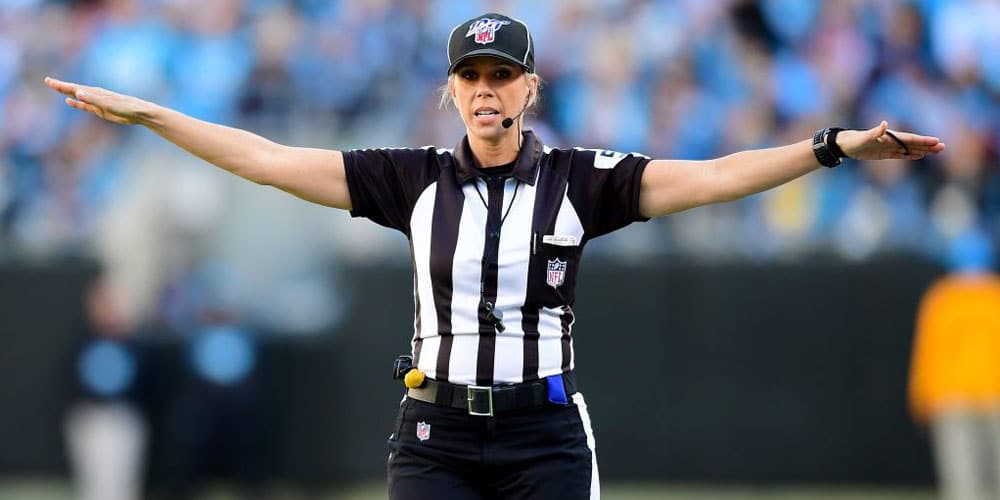 Mississippian Sarah Thomas on Sunday, Feb. 7, will become the first woman to officiate the Super Bowl. She will serve as the down judge, a position she has held in the NFL since 2015, when she became pro football’s first female official.

You should know that serving as an official in football’s grandest game represents a reward for a job well done. “They are the best of the best,” said Troy Vincent Sr., NFL executive vice president for operations, in announcing the seven-person officiating crew for the 55th Super Bowl, which will be played in Tampa.

While many will be surprised to see a woman on the field at the Super Bowl, anyone who has followed Thomas’s career should not be. This writer surely is not. Thomas, 47, has been a trailblazer throughout her career.

She was first pointed out to me in 2007 when I was covering a Southern Miss football game in Hattiesburg. The late Jack Vaughn, a former NFL official who called three Super Bowls, was serving as the replay official in the press box. We both had our binoculars and he pointed Thomas out to me at about midfield. “She’s good, really good,” he told me. “I believe she’ll be officiating in the NFL one day. She’s that good.”

Funny story: In the summer of 2011, I was in New Orleans walking the sidelines at a Saints scrimmage in their indoor practice facility. I literally bumped into a little boy on the sidelines, playing with a tackling dummy. He looked to be four or five years old, and I figured he was the son of a coach or player.

“Where’s your daddy?” I asked him.

“Then where’s your mommy?” I asked.

The little guy turned and pointed out on the field. “She’s out there,” he said. “See her? She’s wearing the striped shirt.”

And there was Sarah Thomas, blowing her whistle, waving her arms and signaling a timeout. Turns out, she was then in a training program to become an NFL official, just as Jack Vaughn had predicted.

So, you ask, how does a woman become a football official? Well, if you are Sarah Thomas, you grow up in Pascagoula playing all sports with your two brothers. In high school, you play softball and basketball. You continue to play at Mobile College, where you become an academic All-American in basketball. You graduate and there’s no sport left for you to play and an older brother asks you if you’d like to try officiating. So you attend an organizational meeting of high school officials, you study the rules, you take the test and you join the group.

And then you work your way up the ladder, rung by rung, until you reach the top. Last Sunday night, Thomas called Tampa Bay’s victory over the New Orleans Saints in the Superdome. TV cameras showed her several times in her duties as down judge, lined up at the line of scrimmage on the sideline opposite of the line judge on the other side of the field. She was shown making several calls, none of which she missed. She officiates with a confident and business-like air about her.

Said the NFL’s Vincent of Thomas in Tuesday’s announcement, “Her elite performance and commitment to excellence has earned her the right to officiate the Super Bowl.”

Hers is simply one more advancement for her gender in sports. I’ve seen so many in my years of covering games. The first Mississippi high school girls basketball games I covered were three-on-three on each end of the court because the old men who made the rules thought girls too dainty to run the full floor. They didn’t have a women’s marathon in the Olympics until 1972. Again, 26.2 miles was considered far too strenuous for females. Now, the women’s world record for marathons is two hours, 14 minutes, four seconds. That would have won men’s Olympic gold in 1968.

The Miami Marlins of Major League Baseball recently hired a female general manager. Several college athletic conferences have female commissioners. And we could go on and on.

Sarah Thomas is not the first female to possess the ability, personality and know-how to successfully officiate professional football. She is the first to have the opportunity.

And she has made good on it. There are 121 NFL officials, one woman: Sarah Thomas.

NFL officials assigned to the Super Bowl are not allowed to do media interviews until after the game.

Her response: “Thank you, I want to make Mississippi proud.”