In Warren County, the Mississippi State Department of Health reports 14 new COVID-19 cases and one new death Wednesday. The cumulative number of cases in the county to date is 762, and the county’s death toll is 23.

MSDH reports Wednesday that another 34 Mississippians died of COVID-19 statewide, bringing the total number of deaths in the state to 1,423. The state’s rate of deaths to confirmed cases is about 3%, a rate that has been falling very slowly for a few weeks.

Deaths and new cases were reported as of 6 p.m. Tuesday, July 21. MSDH usually reports new statistics on the COVID-19 coronavirus each day based on the previous day’s testing and death reports.

The total number of Mississippians tested (PCR) for COVID-19 to date is 402,474 or about 13.5% of the state’s 2.976 million residents. The positivity rate of positive results to total tests is 11.7% indicating Mississippi is not testing enough, and results are probably an undercount of actual infections.

The total number of outbreaks in long-term care facilities is 161. About 46.5%, or 662, of the state’s total deaths were people in long-term care facilities. In Warren County as of Friday, July 17, MSDH reported that Shady Lawn Health and Rehabilitation and The Bluffs Rehabilitation and Healthcare Center are under investigation for active COVID-19 outbreaks. Shady Lawn has two COVID-19 cases among staff, three cases among residents and one resident death, The Bluffs has three cases among staff. Deaths in the county include nine residents of Heritage House Nursing Center, which is no longer under investigation.

MSDH has estimated the number of people who can be presumed recovered from COVID-19 in Mississippi. That number is 30,315 through Sunday, July 19. This figure is updated weekly. It represents about 64.4% of the cumulative 47,071 cases reported as of Wednesday, July 22.

The primary metric concerning state health officials are the numbers of people hospitalized, and that number has been steadily rising with new cases. On June 6, the number of Mississippians hospitalized with confirmed cases of COVID-19 was at a low of 358. Since then, hospitalizations have nearly tripled. Last week, health officials began warning repeatedly that some hospitals were running out of ICU beds.

The number of Mississippians hospitalized for the virus as of 6 p.m. Tuesday, July 21, is 1,165, another record high. The number includes 942 with confirmed cases of COVID-19 and 223 people with suspected but unconfirmed cases. Of those with confirmed infections, 303 were critically ill and in intensive care units and 138 were on ventilators. 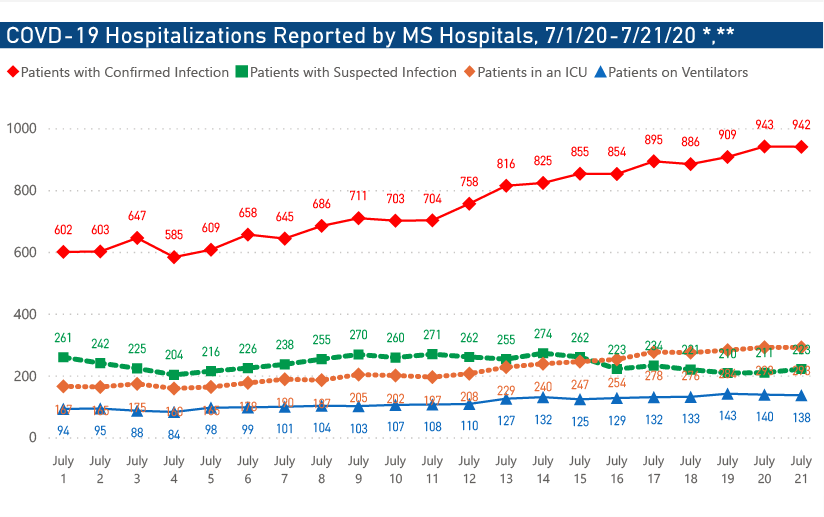