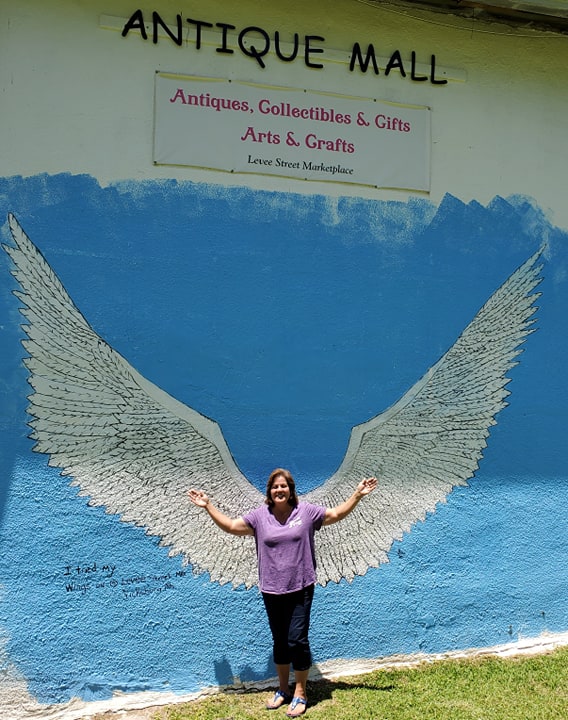 When Mary Landers asked Scott Pevey to paint some wings on her building she had no idea how popular they would become, or that she was part of a movement.

Scott Pevey moved to Vicksburg about 5 years ago after 10 back surgeries and being put on the disabled list.  After a lifetime of working for a large construction company in many capacities including being the foreman, the toll on his body became too much for modern medical science.  So he took to woodworking to pass his time.  As he took the steps one at a time in slow, measured movements, the concentration on his face told the story of the never-ending pain his life’s work has caused him.

Woodworking and art are his passions now as he speaks proudly of his 6 children.  While he shared stories on all of them, all adults now, the one who is on a submarine seemed to be his focus today.  The one who just left the Navy was mentioned with the same pride as the one who just joined the Marines.

All the wood for his projects is found or recovered.  It may have been used for something else but Scott turns it into art and function.  He has a wide variety of hand made items that include several candleholders, decorative wood boxes for Dad and even paddles that say ‘Make America Great Again’. The items are displayed at the Levee Street Marketplace by the old train depot.

Mary Landers opened the Marketplace about 6 years ago and it has been a huge success for her and the community.  The Marketplace is housed in a building she inherited from her dad, Henry Heggins, and operated as a furniture store for 30 or so years before becoming the Marketplace.  Her dad entered the furniture business in a building just up the hill from the Marketplace. When the Mayflower Storage Building became available in 1973 her dad bought it.  The very young Mary had no idea at the time the building would be central to her life.

The Marketplace is a business where local vendors can show their wares.  The business side of things is very friendly for a person thinking they can make it in the retail world.  You can display your wares in a section of the building for a small rental fee and a percentage of your sales.  Everything on the business side is handled for you.  At the end of the month, you come and collect your check.  Most of the vendors check their inventory regularly to keep the displays looking sharp.  The Marketplace is currently 97% full with only a couple of spots available.

Mary Landers had the idea for the wings a couple of years ago but didn’t know anyone who did that type of artwork.  One day as she was doing her thing at work she had a eureka moment when she saw Scott’s work and realized he could probably do it.  She asked him, he researched it and just like that there were wings on the building.

Within minutes of Scott painting the wings, people were there taking their pictures. 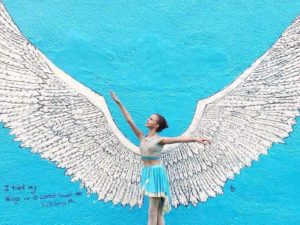 A photo posted on the Levee Street Marketplace Facebook page of an elegant ballerina. 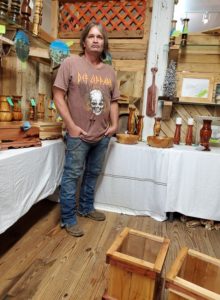 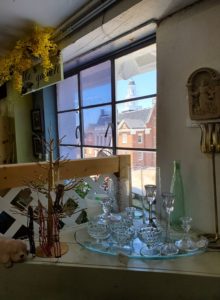 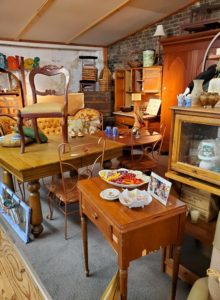 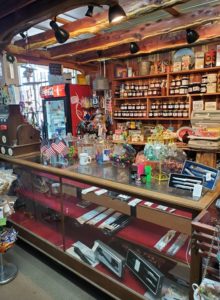 While doing the research on how best to portray the wings Scott discovered the work of Kelsey Montague.  ‘What Lifts You’ is the title Kelsey has put on her art.  It has become popular worldwide, even featuring pop star Taylor Swift in Nashville with a set of butterfly wings.  Kelsey now travels the world putting her ‘What Lifts You’ art on buildings.  Here is a map of where the wings can be seen. You may notice it is on several continents now.

Once Scott realized the wings could be part of a movement he was inspired.  Now the building includes the angel wings, butterfly wings, Batman and Superman capes, and most recently a big ole catfish on the line below the Mississippi River bridges.  As we were laughing and talking about the art and the impact it had on people someone brought up Wonder Woman and plans were being made.

Scott Pevey summed it up nicely.  He said, “If one person takes a picture and says a prayer for peace and understanding, then it was all worth it”.