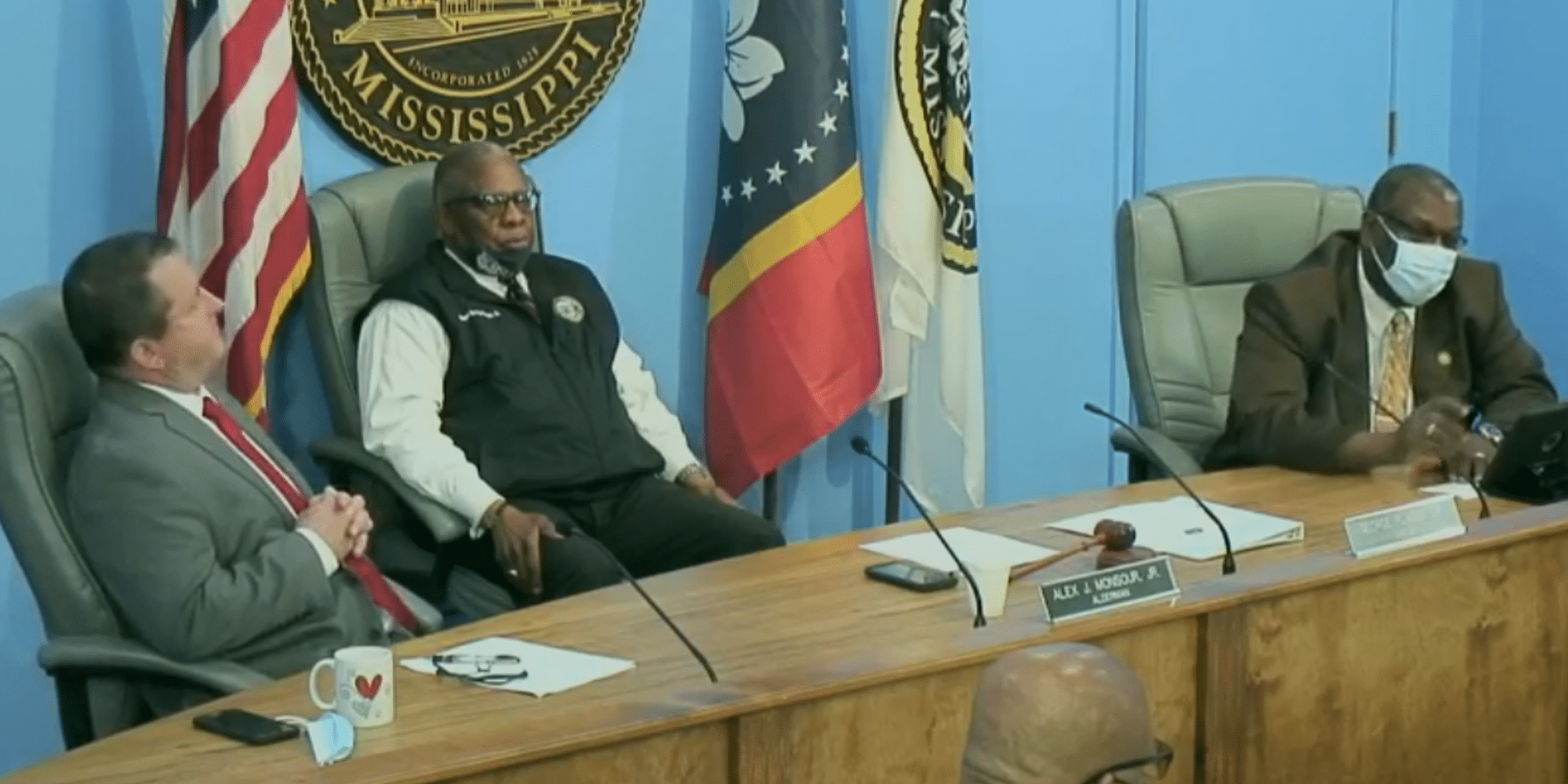 At this morning’s meeting of the Board of Mayor and Aldermen, South Ward Alderman Alex Monsour expressed his displeasure with North Ward Alderman Mike Mayfield over statements made in an interview with the Vicksburg Daily News’ Keith Phillips.

In an interview done on election night, after Mayfield won re-election in the North Ward, Mayfield said, “There are some things that I tried to do that I did not get done mainly because I did not have a second vote to do it. I want to make sure the citizens understand that I need your help. You put me there and I am asking you to help me do what needs to be done. But most of all, if you are on a board of three, you must have two to get something done.”

Monsour took exception to the comment and stated in today’s meeting, “I am responding to an interview done with Alderman Mayfield by Keith Phillips.” Monsour quoted the above and replied in reference to Mayfield: “He’s taken credit for everything we’ve done. But, I want the citizens to know the truth this morning. In the four years I’ve been here Mr. Mayfield has never come to my office and asked me to second anything. Not one time.” 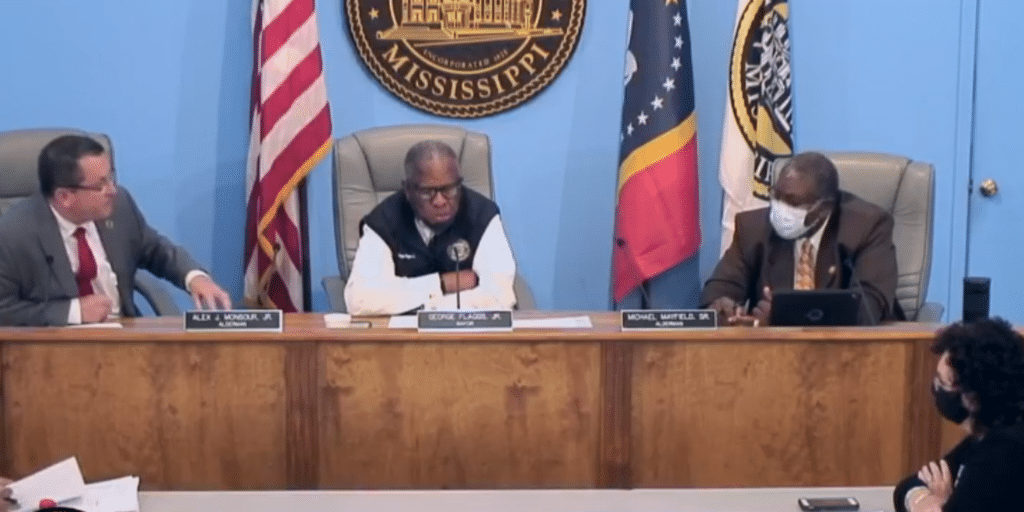 Aldermen Monsour and Mayfield exchange a heated discussion with Mayor George Flaggs Jr. in the middle. (Photo: Screengrab from VTV)

Monsour went on to express how he serves the entire community, including the North Ward, mentioning how he is currently working on two issues from citizens in the North Ward. “I don’t limit myself to the South Ward. But when I get accused of not providing a second vote to help the citizens in Vicksburg, Mississippi, I’m going to take offense to that because it’s absolutely absurd and not true.” Monsour continued, “In addition to that, anytime one of us …wants to put anything on that docket, all they have to do is go up there, and as long as it’s legal, and it passes legal, we put it on the docket. And you know what? I’ve never voted against anything for the North Ward that been on the docket. So I ask the question, ‘Why didn’t you put it on the docket?”

“Now, I’ve just got to ask him today, what it is that you came to me and asked me a second on that I’ve turned you down?” concluded Monsour.

“Okay, I’m going to give you a list, sir” responded Mayfield. He brought up the bayou’s and the need to match the funding to clean them. Monsour sharply retorted and the Aldermen began a back and forth confrontation with a visibly uncomfortable Mayor George Flaggs sitting between them.

The confrontation continued with Monsour repeating that Mayfield never asked for a second vote and Mayfield responding that his projects were not even approved for the agenda. Mayor Flaggs gaveled the conversation in an effort to restore order to the pointed confrontation. 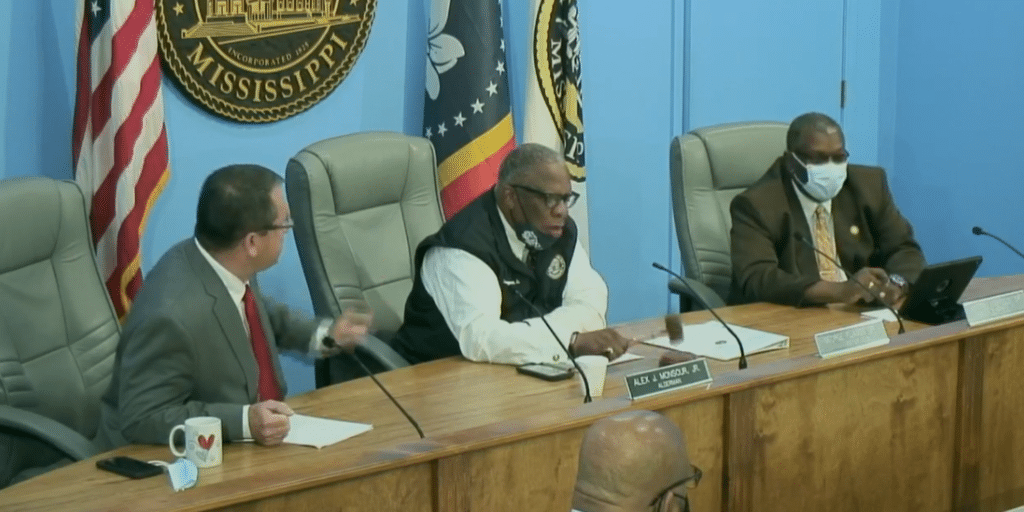 Vicksburg Mayor George Flaggs Jr. tries to gavel some peace between the two aldermen with no success. (Photo: Screengrab from VTV)

“I demand an apology!” said Monsour as he pointed at Mayfield to which Mayfield immediately quipped “You’re not going to get an apology from me.”

Flaggs again lightly gaveled the conversation in an attempt to end the back and forth and said “Hey hey hey, let’s…”

Speaking over the Mayor, Mayfield said “There are several things, sir” at which time Flaggs pushed his chair back to allow the two to go at each other without him in the middle. “He came at me, now. I’m going to respond and I appreciate you(Flaggs) sitting back” Mayfield declared.

“There are several things, Mr. Monsour, that have come up in the South Ward, that I have voted for…because it was the right thing to do” continued Mayfield in his deep voice. “There are so many things in the North Ward that have come up… look at how long it took me, Sir, to get the park done over here at Mission Park. Look how long it to do the neighborhood parks.” Monsour quickly replied “No Sir! That is my responsibility, I do the neighborhood parks.”

“Man, get real” Mayfield glared as Mayor Flaggs remained motionless between them before finally moving his chair back to the desk with Monsour leaning towards the center saying “You never got on me, Mike.”

The two Aldermen continued to poke at each other, with Monsour concluding, “Well, I wanted to expose that.” and Mayfield responding “You exposed it but you’re lying.”

Finally, Mayfield said “You are a liar” and Monsour replied “You are, Sir.”

We have embedded the video below. The heated exchange begins at time mark 21:27