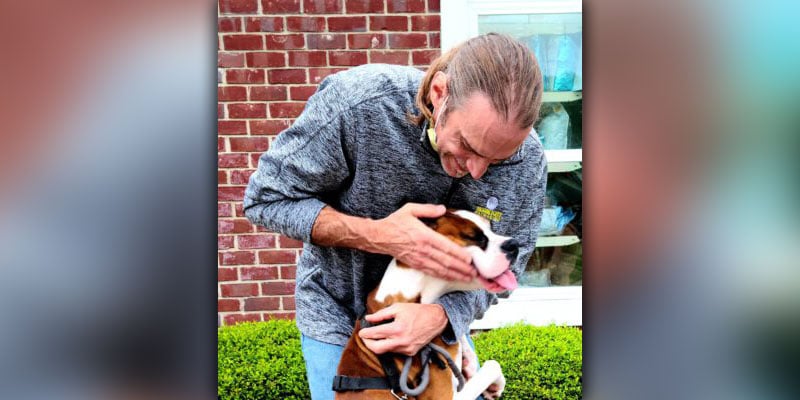 On Sunday afternoon Pennsylvania resident Jim Swires was just entering Warren County on his way to Port Arthur, Texas when his vehicle crossed the median and struck another vehicle. Onboard with Jim were his two 18-month-old Boxers, Sato and Thor.

Jim has little memory of the accident or what led up to it. As is common after being in a collision, he could barely recall his full name after the accident. Fire Boss Jerry Briggs was at the scene assisting Swires and after getting Swires safely on his way to UMC, had to decide what to do with Sato and Thor.

Briggs has several dogs and cats at his house already and didn’t think it would be a good idea to add two more. Plus, the boys were just in an accident so Briggs thought it best to have them checked out. He contacted the Animal Medical Clinic on 61 North where Dr. Rachel Potter was on call. Dr. Potter met Briggs at the clinic and began treatment on the traumatized 18-month-old pups. American Towing and Recovery out of Raymond worked for a couple of hours to clean up that messy accident. 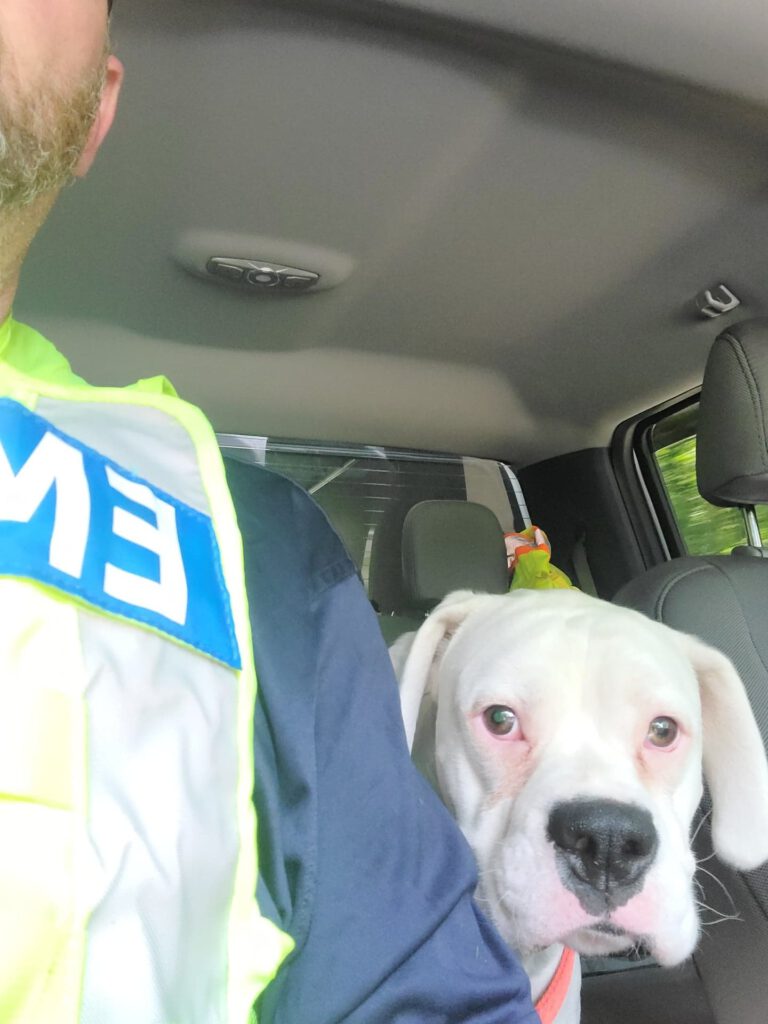 Fire Boss Briggs and Sato riding to the Animal Medical Clinic after the accident. Photo by Jerry Briggs.

Meanwhile, Doctors at UMC were trying to figure out what caused the otherwise healthy Jim Swires to blackout while driving. They ran a bevy of tests and could find no cause but Swires believes it was due to not eating that morning or getting his cappuccino’s. “I normally have three each morning. Yesterday morning I didn’t have any,” explained Swires. “I don’t have diabetes, but I think I bottomed out, I think that is what happened.”

Dr. Potter at the Animal Medical Clinic had determined the dogs were uninjured and other than being a bit confused at what was going on, were healthy and well behaved. “They ate and are curious as can be” added Dr. Potter. 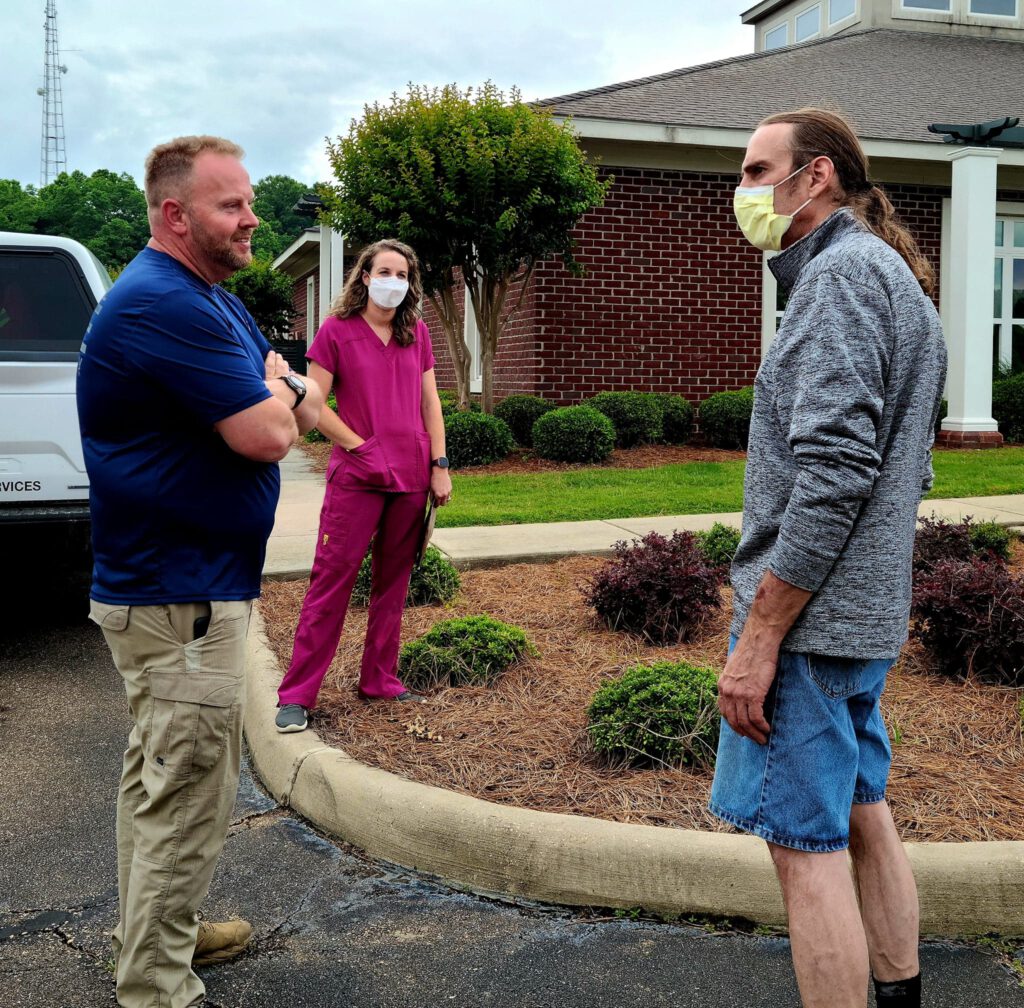 The Doctors at UMC insisted on keeping Swires overnight for observation. It was about that time Swires realized his medication was lost in the accident. Getting a new prescription on a Sunday evening would be a challenge so Swires hoped for the best. It didn’t even occur to Swires a tow truck driver he had never met before would go above and beyond.

The people who work the tow trucks don’t get enough public praise for what they do or the dangers they face. Ward’s Tow Truck driver George Spratley, Jr was killed in February when a driver lost control of their vehicle at an accident scene in the Bovina Triangle. His funeral was one of the largest in recent memory and he was honored by his community, law enforcement and every tow truck unit in the region.

Eric Summerlin works at American Towing and Recovery and worked Swire’s accident on I-20 Sunday afternoon. “We were so worried about what would happen with the dogs,” said Summerlin, “I am so happy to hear they are back with their owner.” 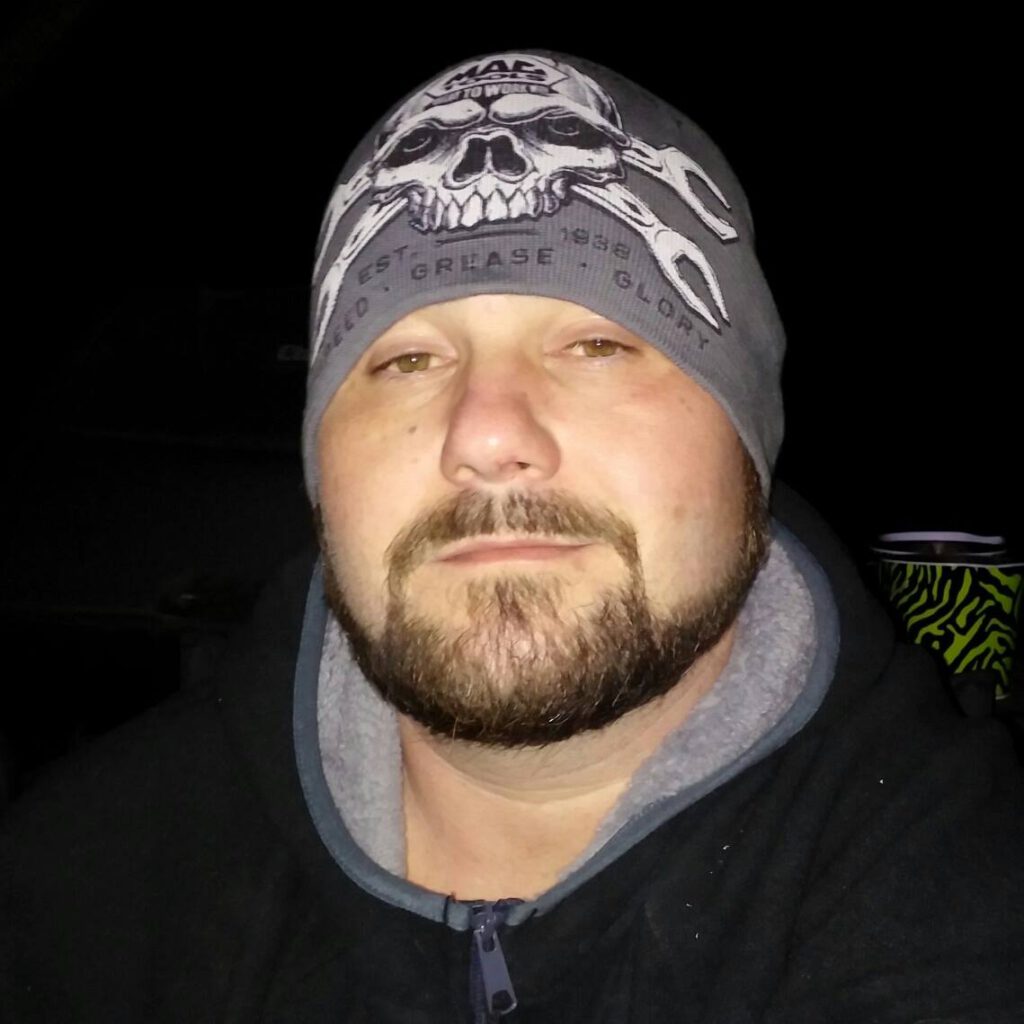 Eric Summerlin of American Towing and Recovery, good neighbor. Photo from his social media and used with permission.

Swires had nothing but praise for Summerlin and his team, “I really don’t remember much from the accident or the ride to the hospital. But that guy (Summerlin) brought me my medication to the hospital. Who does that?! He was awesome.”

On Monday Fire Boss Briggs, Chuck Tate, husband of Debbie, Dr. Rachel Potter and Jim Swires all met at the Animal Medical Clinic on 61 North to return Sato and Thor. The Vicksburg Daily News was on hand to witness the reunion: 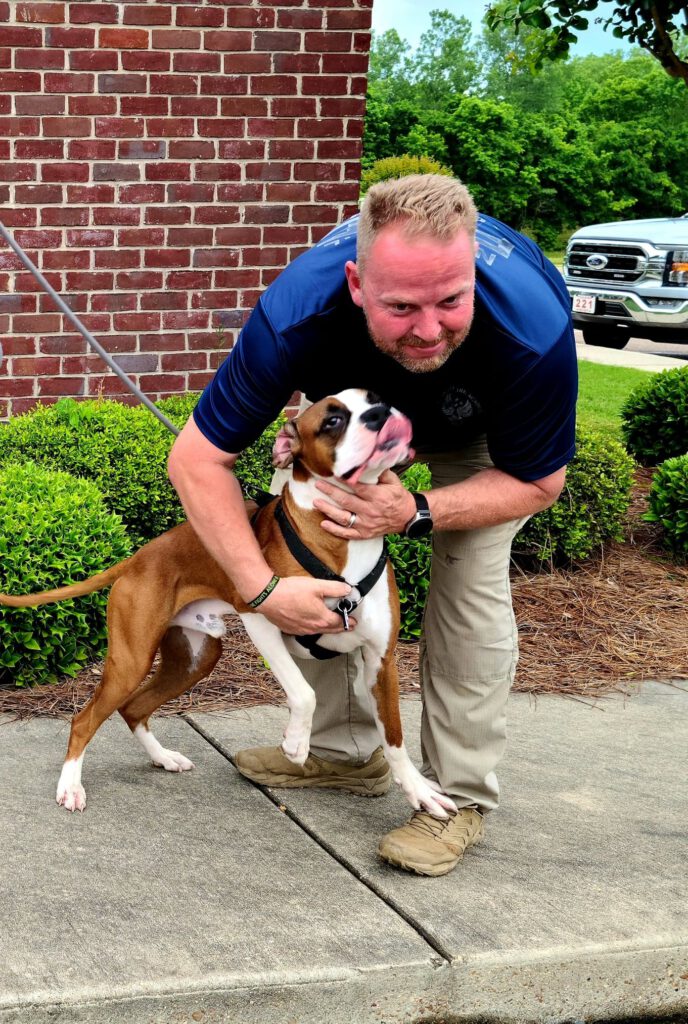