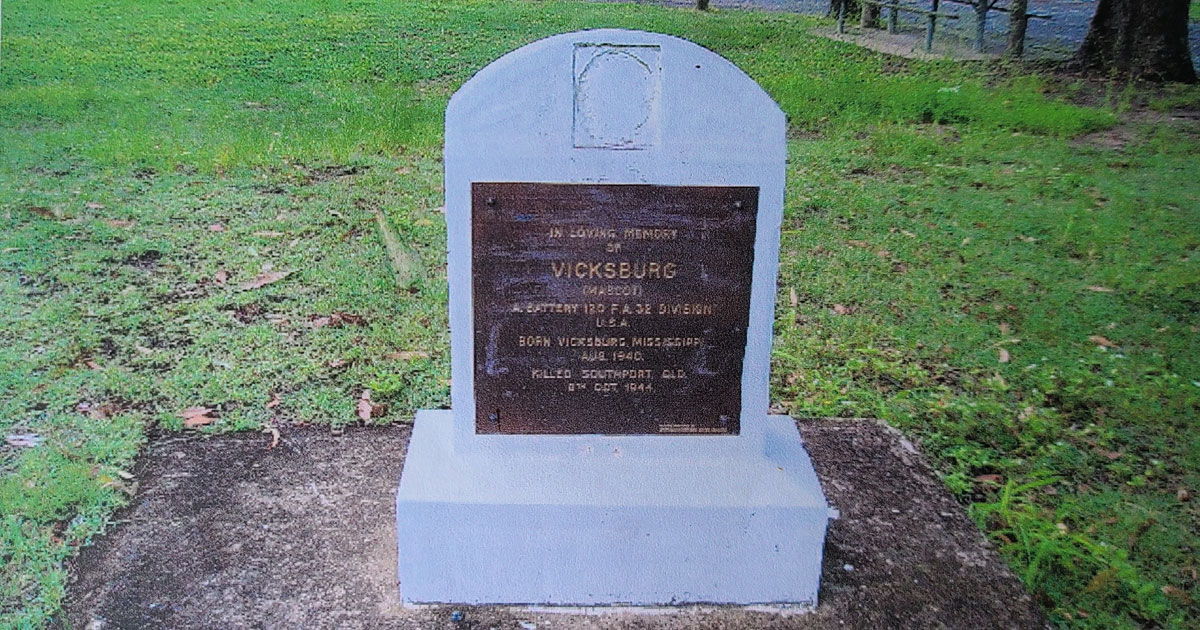 The monument is much like any other. It is white marble with a rounded top, standing several feet high and on a broad base. Attached to it is a brass plaque with an epitaph.

The tombstone is in a park-like area near Brisbane in Queensland, Australia on the country’s East Coast.

Nearby is another monument honoring American troops who were stationed there in World War II at Camp Gable. A plaque simply states, “They passed this way.”

The tombstone is for a sergeant in A Battery, 120th Field Artillery, 32nd Division, U.S. Army. He wasn’t your ordinary soldier — he was a little mongrel mascot named Vicksburg.

The strange story of the love of a dog and the men of the unit was told by Robert J. Doyle who wrote the account for the Dayton Daily News in Ohio and was first published Nov. 4, 1942. It was printed again in a book of funeral stories, “Just Passing Through,” which Charles Riles and I wrote in 2010.

I’m reprinting this story just as Doyle wrote it almost 80 years ago.

Vicksburg’s remarkable career in the United States Army began one midnight in Vicksburg, Miss. The bedraggled mongrel pup was sniffing hungrily at the door of a little restaurant when a young soldier came by on his way to the schoolhouse that was to be his barracks for the night.

“He looked pretty well beaten up,” recalled Sgt. Leo Outcelt of LaCrosse, Wis., as he put down his rifle and helmet in front of an artillery battery tent at a training camp here Oct. 13. Outcelt and several other soldiers glanced at a little mound roped off in the center of the battery area. It was decorated with green branches over the fresh dirt.

Outcelt, 23, was the soldier who picked up the pup in Vicksburg. He named it after the city, and that night the dog slept on the foot of Outcelt’s cot. The next morning Vicksburg rode in an army truck as his new master headed for camp.

“I guess he was part terrier, part dachshund and part Scotty,” said Sgt. Luther Paulson, 25, of LaCrosse. “He had long hair – brown, black and gray. He had a long body, but a pretty head.” Vicksburg soon had the run of the camp. He had the required shot for rabies, and Outcelt got a special permit from the provost marshal to keep him. For a few weeks Vicksburg slept only on Outcelt’s cot, but he soon came to know all the soldiers in the battery and divided his devotion, showing an understanding fondness for the group that operated the kitchen. Vicksburg quickly learned the battery “chow” call and usually was the first to the mess hall.

The soldiers made Vicksburg a jacket with sergeant’s chevrons on the shoulders. His rank was unofficial, but at regimental reviews Sgt. Vicksburg trotted proudly ahead of the battery.

Many times, Vicksburg’s life with the Army was threatened by an official order, but he always managed to pop up somehow. Take the time the battery packed up and left camp for good. There was a long train ride to the port of embarkation. As the battery boarded the train, Vicksburg twice was ordered off. Two days and several hundred miles later, the officer acting as trainmaster found Vicksburg in Outcelt’s compartment. The officer insisted on putting the dog off at the next stop but Outcelt pleaded.

“I said that they might as well let him stay on, as long as he had come that far,” Outcelt said. And Vicksburg stayed on.

But there was to be no monkey business when it came to boarding the ship for the long trip to Australia. There seems to be some question about how it happened, but it is possible that someone glanced the other way when a soldier came up the gangplank carrying on his shoulder a denim barracks bag that bounced a bit more than usual.

The day the men disembarked in Australia, Vicksburg was off the ship and in an army truck before you could say, “How did that dog get here?” but there was no chance for him at the camp in Australia. The ultimatum left no room for argument.

About a mile from the Australian camp a farmer’s wife listened sympathetically to the soldiers from the battery. So Vicksburg was tied in a farm yard, a very unhappy soldier. His rope held until the bugle sounded the next morning. A few minutes later he bounded into Outcelt’s tent, just too late to howl with the bugle. Outcelt hustled the dog back to the farm, but the same thing happened the next two mornings. Once Vicksburg arrived dragging a broken chain.

“Then they tied him to a big dog owned by the farmer,” Outcelt said. “The big dog wouldn’t leave the farmyard, so Vicksburg had to stay. We used to get over to see him often.

“Every pay day we passed a helmet in the battery. Every man dropped in some Australian Dins and every month we gave the woman at the farm $12 to $16.”

When the battery moved to the present training camp, part of the trip was by train. Vicksburg rode some of the time on a truck or a railroad car and part of the time in a locomotive cab. He had a way of getting where things were going on. Then, on Oct. 8, Vicksburg was killed. It happened while the men were building a road. Vicksburg got in the way of a falling tree. He was buried on the spot, but two days later his body was removed for a military burial, where trails cross in the battery area.

The battery turned out for the funeral Oct. 10. The soldiers asked Chaplain Austin Henry of Milwaukee to take charge. Chaplain Henry, a major, talked about loyalty, using Vicksburg’s life for his text.

The soldiers watched silently as four pallbearers picked up the rifle box that was Vicksburg’s casket and carried it to the grave. Four men raised their rifles and fired a salute.

While the rifle box was lowered, the battery bugler sounded taps. And every soldier missed the note of Sgt. Vicksburg’s howl.