Fire Boss Jerry Briggs set up a press event for a refurbished fire truck. The work done to the 17-year-old pumper will extend its life for another 15 or 20 years and will save taxpayers hundreds of thousands of dollars. Newsworthy to be sure, but not that big a story.

And there was no way it was a big enough story for the turnout of people. State Fire Marshall Mike Chaney was there, Warren County Sheriff Martin Pace and Billy Joe Heggins, Vicksburg Fire Chief Craig Danczyk, E-911 Director Shane Garrard, two of the County Supervisors, Kelle Barfield and Ed Herring along with former Captain Kenny Pugh, Satartia gas explosion hero Lamar Frederick, LeTourneau Chief Nick Davies and about 25 current firefighters along with their family members were there.

As it turns out, FireBoss Jerry Briggs was planning a surprise for his mentor, Chuck Tate. The FireBoss was going to honor Tate with a plaque dedicating 205 in his honor. He even had the event catered by McAlisters – including their famous sweet tea.

Briggs often says that he is where he is because of Chuck Tate. He even thought about working his way into the Tate family but that date with Heather didn’t end well. Instead, the two firefighters worked together for many years to create a large family of people with a passion for helping their neighbors. 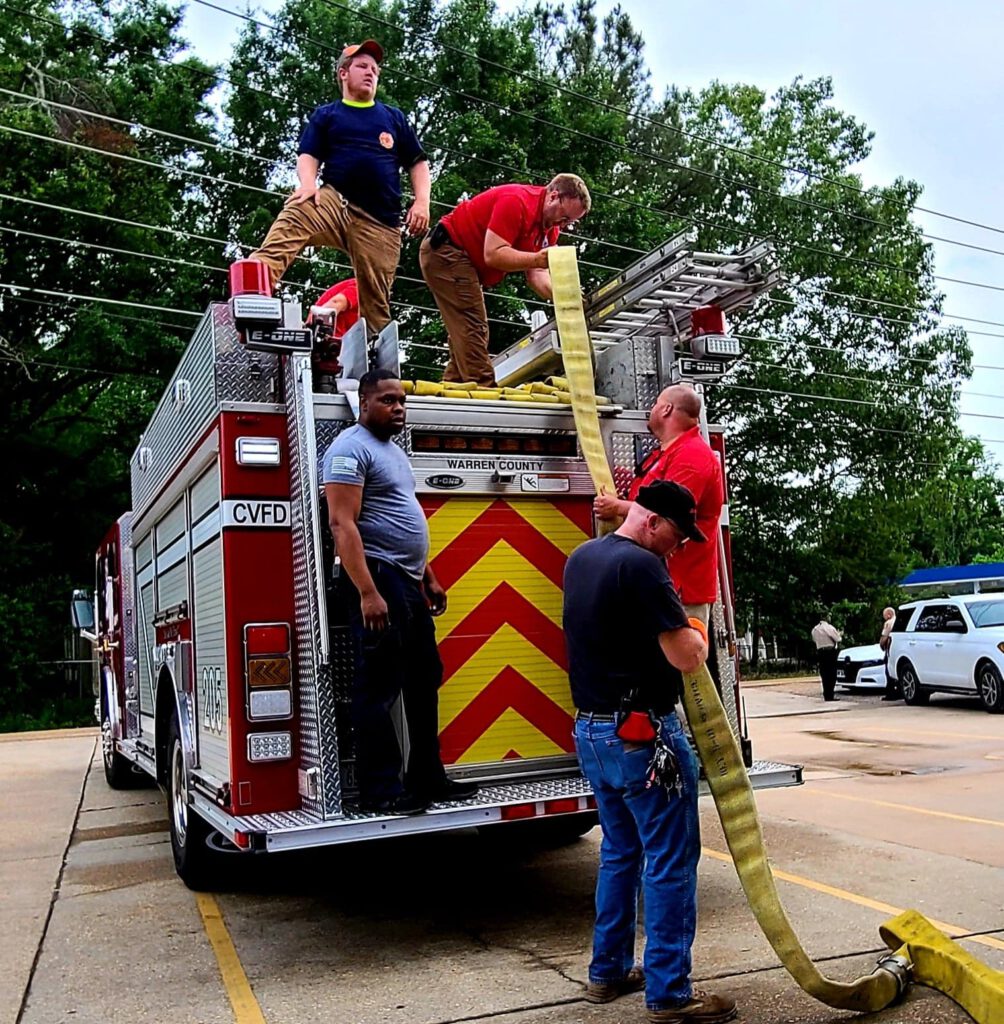 Warren County firefighters load 205 with a firehose. At the bottom left is Antonio Austin, on the ground is Shane Greene feeding a fire hose to Chief Nick Davies. On top of the fire truck, a heroic-looking Zack Hearn is next to an always working Lee Williams. Photo by David Day.

The work to refurbish Engine 205 was done by Sunbelt Fire out of Fairhope, Alabama where Stacy Lay is the operations manager. Lay and his team work with fire departments all across the country selling and maintaining fire equipment. Warren County is special to Lay and his team because, as former firefighters, they fought fires with some of Warren County’s best. In addition to repairing fire equipment, Lay is an instructor at the Alabama Fire College based in Montgomery, Alabama. Lay’s opinion of a fire department is highly qualified based on a lifetime of experience and a wide breadth of contacts. Lay told the Vicksburg Daily News, “Warren County has one of the best fire departments around. I’d put them up against anyone, even a big city with a big budget like Chicago. Y’all are really lucky to have them here.” 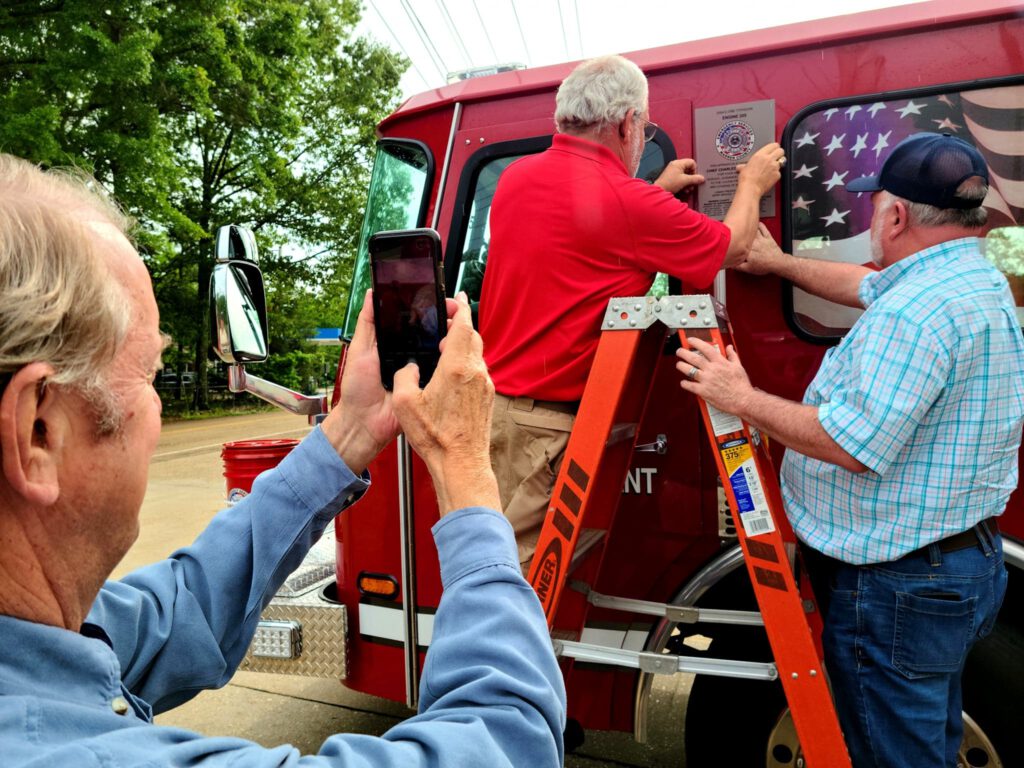 While Tate can be found at a fire scene pulling hoses dressed in his full turnout, most of Chuck Tate’s actions with the fire department these days involve listening to someone complaining about something, needing something or Tate having to explain something. “It wasn’t always that way. We’ve come a long way from me or Jerry answering every call” explained Tate. “And it wasn’t just us, there were others, the Pughs, the Whittingtons and so many others over the years who put a lot of hard work into keeping Warren County safe. The real way you know it’s changed is you hear the tones going out and you hear the radio response of who is going to the call and you can say, ‘alright, I don’t need to go to that one. They’ve got it.’ We’ve got good people who know what they’re doing.” 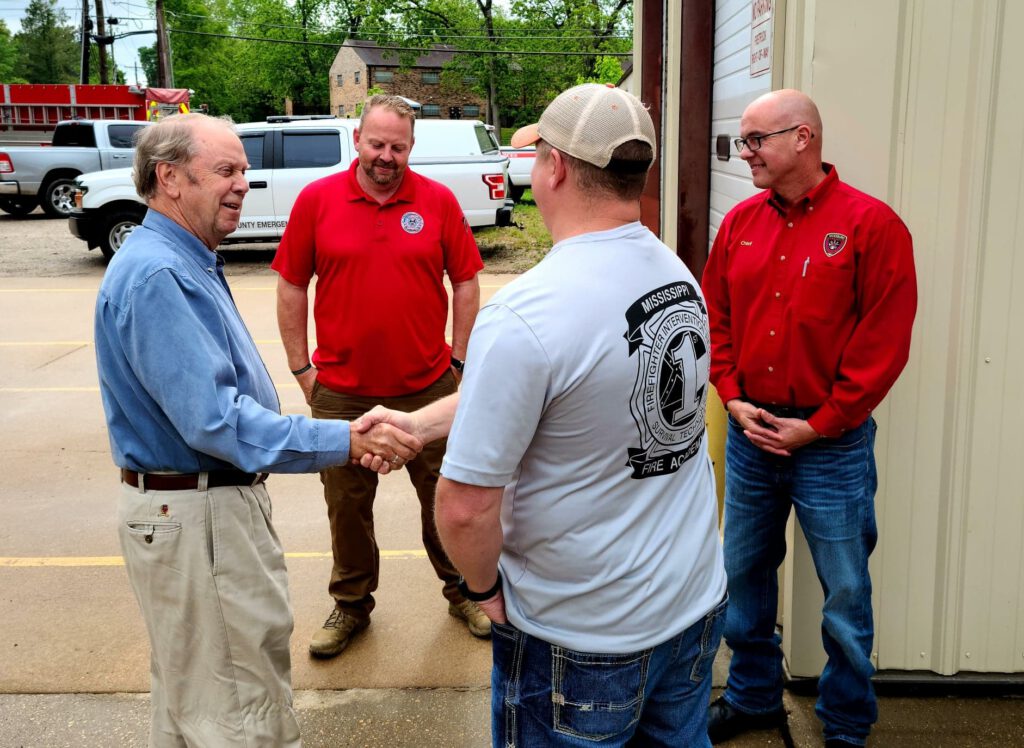 “When I showed up my life was kind of starting over,” said FireBoss Briggs. “I was recently single, on my own, and, honestly, wasn’t doing too well. Firefighting gave me a purpose and now (25 years later) I can’t imagine my life without my firefighting family.” Over the years, Briggs kept showing up at Culkin and worked his way up to chief. He then became the Warren County Fire Coordinator, the Fire Boss. Along the way, he married Kelly and raised two kids. His son is a firefighter in Washington County and his daughter is attending Arizona State as a Pre-Med student. Briggs said, “I credit the fire service for my success and the impact on me and my family.”

Briggs is a natural-born leader who leads from the front but knows when to listen to his fellow firefighters. At the deadly crash on Interstate 20 a few weeks ago, Bovina Chief Kennedy ordered Briggs to take a break out of concerns Briggs was exhausting himself and was going to overheat. Briggs followed orders knowing that Chief Kennedy gave that command out of respect and concern. A good leader knows when to follow orders.

That style of leadership encourages others in the fire department to be as committed and hard working.

Briggs has taken over where Tate left off. “Used to be our trucks were worn out haulers from IP that were donated to us. We slapped a spinning red light on top and rigged up some way to pump water” chuckled Tate. “We’ve come a long way” smiled Tate as he looked at the newly refurbished E-One Typhoon specially built fire truck that now bears his name. 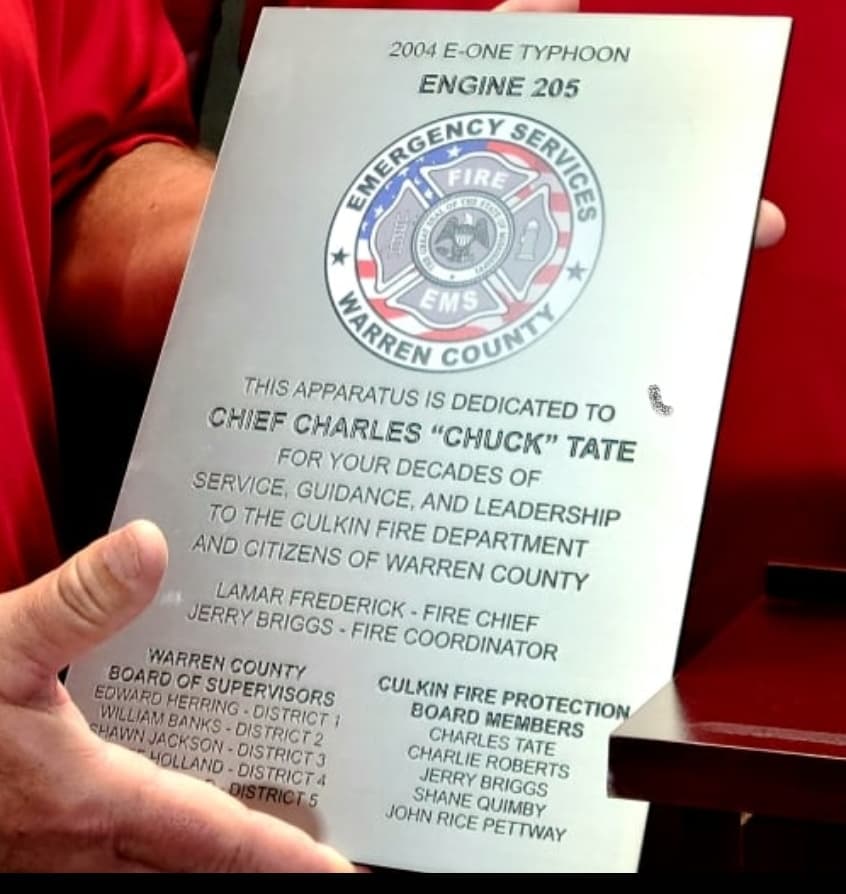 The plaque was given to Tate by a grateful team. Photo by David Day

While Tate was quick to point out all the other people over the years who worked alongside him and helped make the fire department what it is today, Chuck Tate was the one being honored this day.

“The Azaela apartment fire a couple of weeks ago; the fire didn’t go any further than where it was when we got there. There were trained firefighters, with good equipment that knew what to do with it when they got there. They stopped it right there. Nothing else burned that wasn’t already burned.”

And no one was injured. That is the sum total of what a firefighter is supposed to do and Warren County has some of the best doing it.

Warren County has few people who are more deserving of praise for their efforts to keep us safe than Chuck Tate. 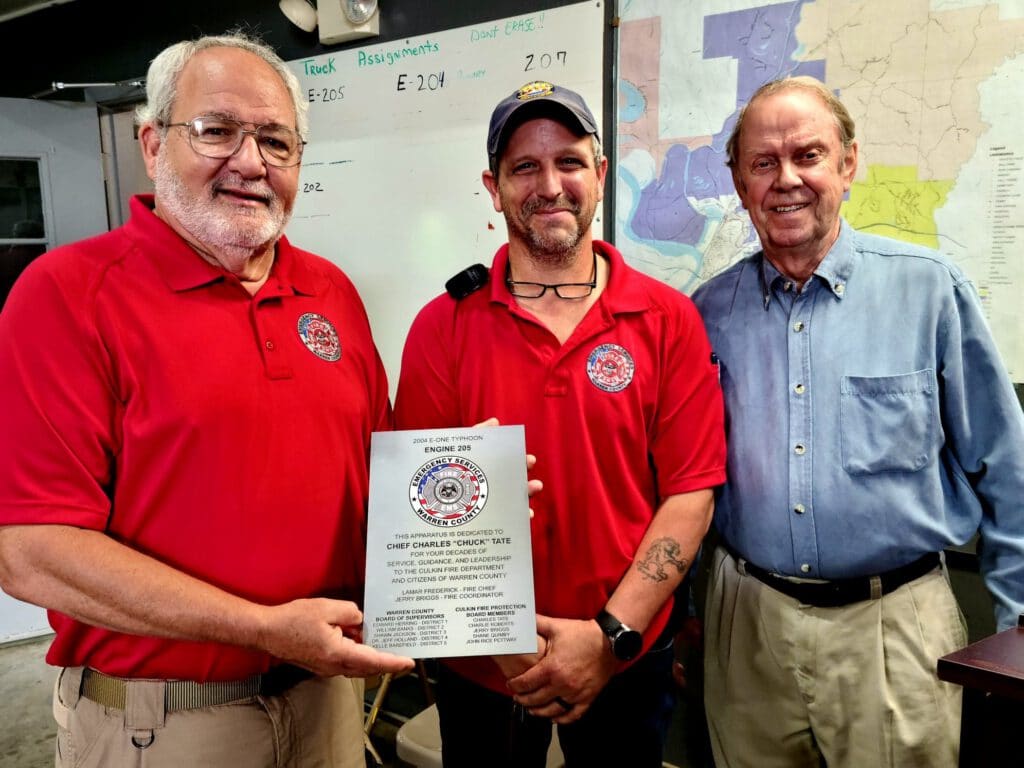 If you want to serve your community and think you have the right stuff to be a Warren County firefighter you can contact Fire Boss Jerry Briggs at 601-218-9911. They will provide all of your training and work side by side with you every step of the way. 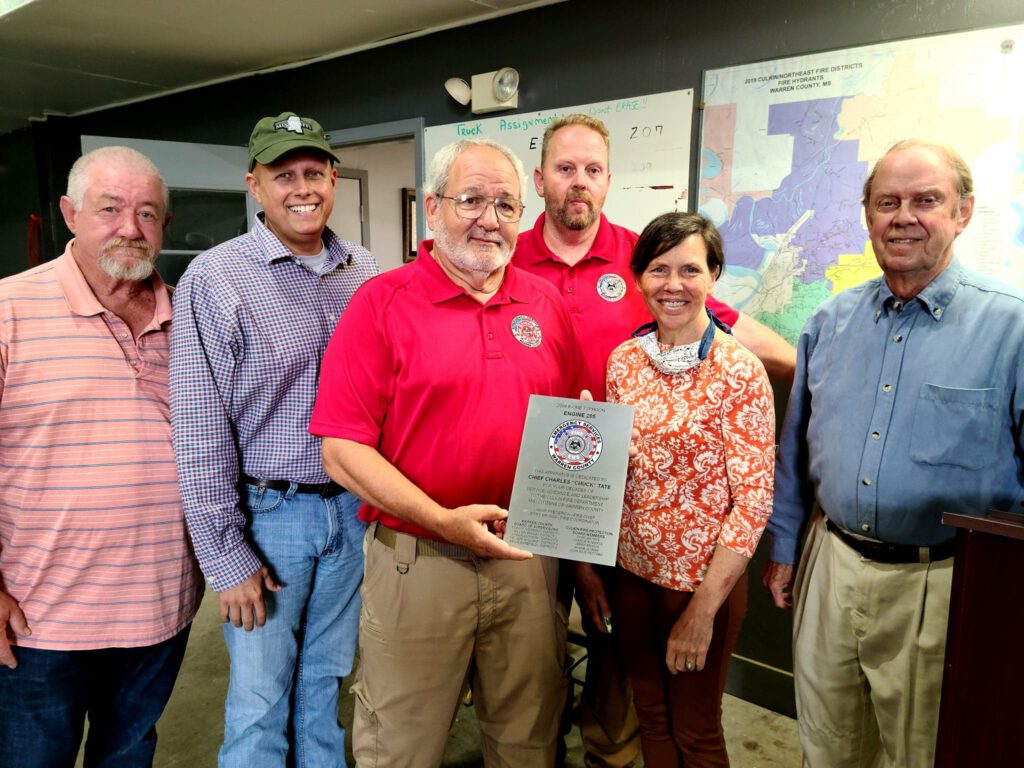