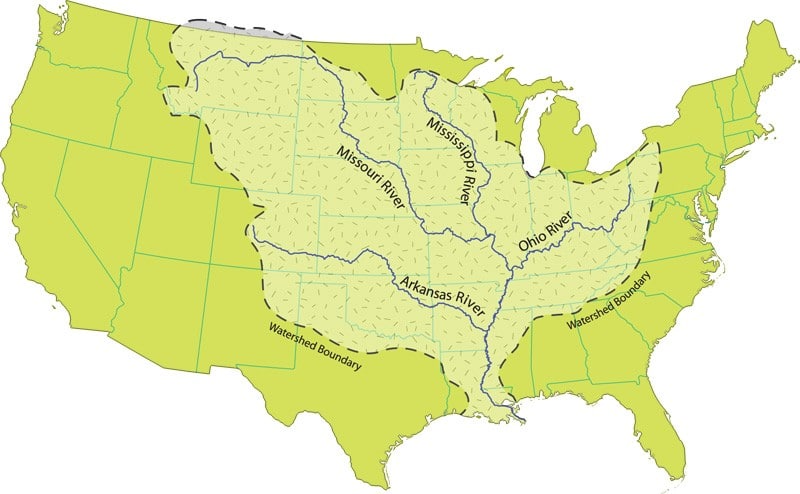 This essay was originally posted on the Finish the Pumps website. It is reprinted here with permission from the author, Ann Dahl.

I have already published one blog on the effects the Yazoo pumps will have downstream, but I think it bears additional discussion.

It would seem that as the original arguments against the Yazoo pumps fall away in light of the devastating reality of the 2019 Backwater Flood, the new battle cry against the project seems to have become the downstream effects.

Being a backwater flood survivor myself, I am completely empathetic with those affected by the flooding of the Mississippi River. The struggle is real for all of us. The devastation that freshwater flooding has had on the seafood industry in the Gulf Coast is no different than the devastation of backwater flooding to the farming industry in the Yazoo Basin. The effects on both of these industries mean not only livelihoods lost for all those dependent on them, but will ultimately affect our entire nation as goods are limited and therefore prices rise.

With that said, the question becomes, will the Yazoo pumps have any effect on the Mississippi River south of Vicksburg and ultimately on the Gulf of Mexico? The answer is so obvious that I really don’t even understand why we are still talking about it: The effects will be ZERO. They won’t even be the tenth-of-an-inch documented in the USACE study linked below, they will literally be ZERO. Read on and I will explain.

The Yazoo Backwater Basin makes up less than 1% of the volume of water that is drained through the Mississippi watershed. More than 99% comes from 41% of our nation and small parts of Canada. The picture at the top of this blog is a visual of just how minuscule our basin is compared to the entire watershed. We are literally a drop in the bucket when it comes to the water draining into the Gulf. But that is the least of the reasons that the pumps will have no effect on the Gulf dead zones.

The scientific data, linked below, from the USACE documents that with the pumps in operation the downstream effect during operation would be a tenth of an inch. The data speaks for itself, so I don’t need to elaborate. But a tenth of an inch is still not the same as ZERO, so read on to see why the effect is ZERO.

All of the backwater in the Yazoo basin, whether it is pumped out a little at a time or whether it is gravity drained through the Steele Bayou gates, drains into the Yazoo River and on to the Mississippi River. With or without pumps, the amount of water that will be drained into the Mississippi River is and will always be the same. Without pumps, as it stands today, at the end of a Mississippi River flood event, the Steele Bayou gates are opened and the entire backwater is drained at up to 48,000 cubic feet per second. That is exactly what occurred during most of the month of August last year with no downstream effects noted. The difference with the pumps in operation is that they would start pumping at the beginning of a flood event and be pumped at a slower, more controlled, rate of 14 cubic feet per second. This could actually be advantageous to avoid the algae bloom that is so disastrous for the Gulf as it is more likely to occur earlier in the year.

Opposing the Yazoo pumps to avoid draining the Yazoo backwater into the Mississippi River and on to the Gulf of Mexico fails the common sense test. If it is not pumped out earlier and slower, then it will be drained out later and faster. With or without pumps, the water is headed south down the Mississippi River. That is why the difference in the amount of water draining into the Mississippi River is ZERO, only timing and rate will be affected. Our fellow flood survivors on the coast should be working with the Corps to find real solutions to their issue and not exhaust resources fighting a project that can’t affect it.

Related Topics:2020 floodsFeaturedYazoo backwater
Up Next

MEMA working to get federal flood relief for 14 Mississippi counties