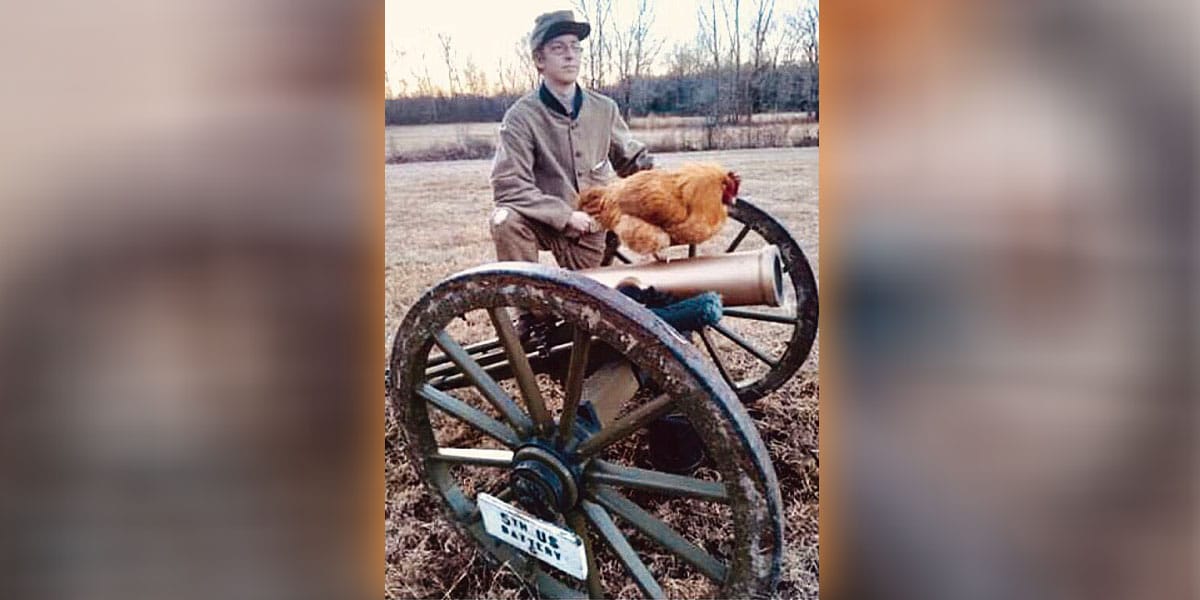 Ramsey and his faithful Peep (with permission)

A pet chicken, a boy from Mississippi and a farmer in Alabama all have the makings for a great redneck joke, but this true story wasn’t a laughing matter for Thomas Ramsey.

Ramsey, 18, was headed home from a Civil War reenactment weekend in Spring Hill, Tennessee when he stopped for a bite to eat at a Cracker Barrel restaurant in Cullman, Alabama. He tied his pet chicken, Peep, up to his truck in the restaurant parking lot.

Ramsey was understandably upset when upon leaving the restaurant he discovered that Peep was missing. And Peep isn’t just an ordinary chicken.

Peep plays an integral part in a military reenactment group for youth founded by Ramsey. More specifically, Peep participated in Civil War reenactments around the country.

Ramsey said Civil War soldiers sometimes had animals with them on the battlefield, so he takes Peep to reenactments. During the first one Peep attended, he said, the bird got out of a bag and wandered around during the simulated battles.

Ramsey, of Copiah County south of Jackson, said he went back inside and, even though he was panicked, had a hard time keeping a straight face when he asked a manager if they had cameras in the parking lot because someone stole his chicken.

Someone overheard and said they had seen Peep wandering in the parking lot. An animal control officer got involved in the hunt and “missing chicken” photos of Peep soon spread on social media pages around Cullman, a city of about 16,000 people 50 miles (80 kilometers) north of Birmingham.

Ramsey had no choice but to sadly continue his drive home without Peep. Then he got a message that the bird had been found by a farmer named John Watson. Watson had safely captured the rooster several miles from the Cracker Barrel and was willing to meet Ramsey in Birmingham for a reunion of friend and fowl.

As for the reason the farmer was willing to go out of his way for a stranger, Watson said he was just paying it forward. He explained that God has been good to him and his family and he wanted to help somebody out in return.

When asked if Peep was excited during the reunion, Ramsey said, “In the reenactments, there’ll be about 10 cannons just blazing and all the rifle fire and commotion and that doesn’t make Peep go crazy. He’s a pretty chill chicken.”