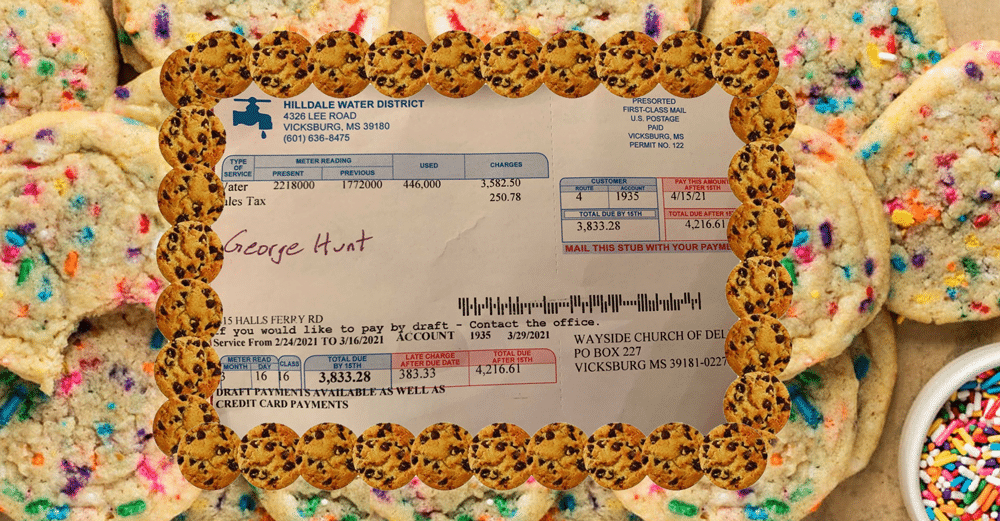 On Sunday, the Vicksburg Daily News brought you the story of Wayside Apostolic Church of Deliverance and their issues with the Hilldale Water District. The church had a water bill of just over $3800 that was incurred as the result of a burst pipe during the ice storm. It most likely burst and ran up that amount while the roads were iced over.

The church has an aged membership of less than a dozen that Bishop Reed serves. They are on fixed incomes and the burden of this bill would serve to effectively close the church.

Hilldale Water District has refused to offer any reduction in the bill, although they did offer a year-long payment plan without interest. Board President George Hunt even informed Tommy Parker with the Vicksburg Daily News that he didn’t care if the church or he had to bake cookies and sell them, the bill had to be paid.

We haven’t preheated the oven just yet, but we will if necessary. For now, we’ve turned to our loyal audience and many have responded. Yesterday afternoon, Vicksburg Mayor George Flaggs Jr. committed one hundred dollars of his salary for the next twelve months or until the matter is resolved. He also issued a challenge to other elected officials to match his donation.

State Representative Oscar Denton is among those listed as contributing. Some, like Mayor Flaggs, have issued checks directly to the water district, while others have chosen to contribute through the Go Fund Me effort set up by the Vicksburg Daily News on behalf of the church.

Helping our neighbors in their need is something Vicksburg has always excelled at doing. When the going gets rough, this community gets going.

The Vicksburg Daily News is committed to this cause. If we have to bake and sell cookies then we have only one concern; what flavor would you like, and one dozen or two?